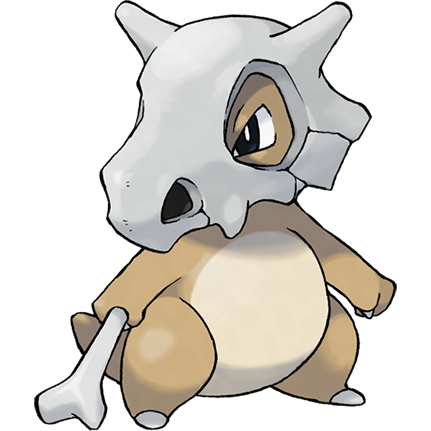 Is there anybody out there who doesn't like Cubone? I can't imagine who, or why. Cubone is a little baby dinosaur-like creature who wields a femur as a boomerang and wears a skull over its head, which is so radical it's only missing a skateboard and some cool shades, but things take a turn for the darker when you read its pokedex entries.

Cubone's "helmet" is literally supposed to be the skull of its own dead mother, stained by Cubone's tears. We're left to believe this is true of every single Cubone in existence, which is logically impossible, but it's just too unique and too heartbreaking to let a little thing like "sense" get in our way.

I fully accept as canon that, somehow, all Cubone inherit their mother's dead bones...though maybe there's somehow still a way for the species to perpetuate. Maybe a mother Cubone produces a whole clutch of young, but sort of "evolves" into a dead skull and a bone for each of her offspring? It's no weirder than a bunch of magnets evolving into a UFO, right? There are a few creatures in nature who always die during or after reproduction, in some cases allowing their young to consume their remains for a boost of nutrition.

Alternatively, some have speculated that Cubone is actually some other pokemon, undergoing a special and rare evolution when its mother perishes. This is usually Kangaskhan, which we haven't reviewed yet, but once we do, this will make more sense. 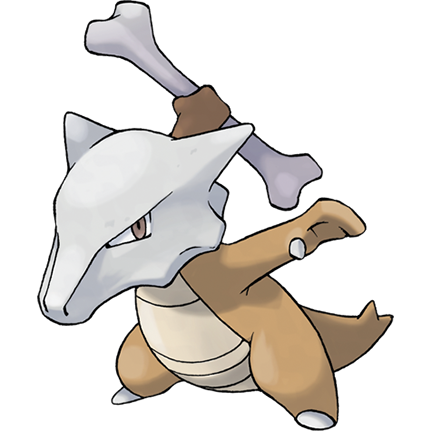 Whatever explanation helps you sleep at night, sad little Cubone eventually grows up into the grizzled, hardened Marowak. Aesthetically, I like Cubone's skull helmet a little better, but conceptually, I love how the skull appears to have permanently merged with Cubone's head as it evolved. It clearly isn't as removable for Marowak, which even has a functional bony jaw in some of its artwork.

It's strange, however, that with over 700 pokemon, Cubone and Marowak remain the only pokemon line with any kind of skull, skeleton or bone theme. Even the ghost pokemon Duskull just drops its skull completely when it evolves. Where are the skeletons, gamefreak???

Where are the skeletons.

There sure are a lot of four and five ballers in these middle numbers!