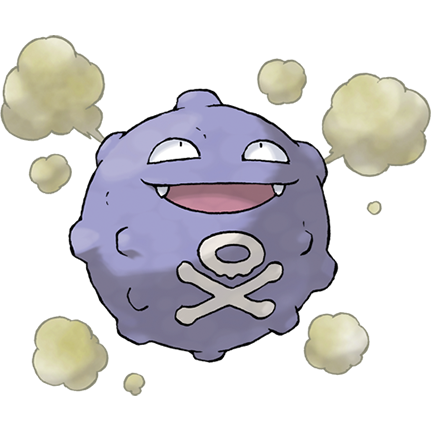 Another I've been strongly looking forward to, I've always thought of Koffing as one of pokemon's single most memorable, inventive creations even after more than six hundred additions. You could call it another "ball with a face on it," but with its kickass jolly roger markings, wart-like pores, lovable personality and grotesque biology, Koffing has a lot more going on than just any ordinary orb. 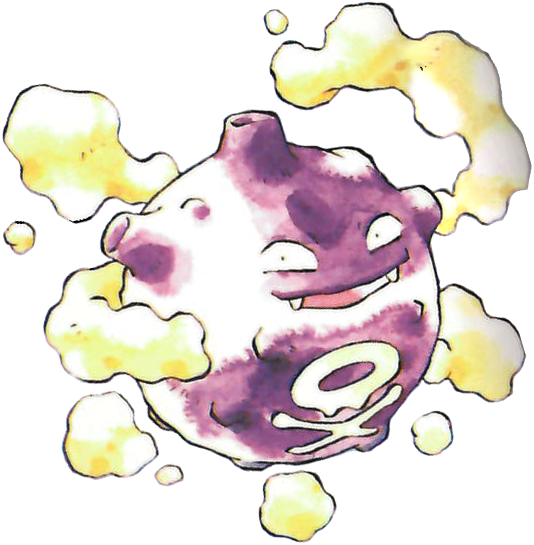 Koffing's concept more or less boils down to a pollution balloon. It's a putrid, malodorous sac of noxious fumes and virulent bacteria that bobs through the air, spews toxic vapor from its little nodules and occasionally explodes when its internal chemistry gets volatile enough, which is why its design also invokes a naval mine.

Perhaps the best part of Koffing, however, is the sheer joy on its little face. It looks almost blissfully delighted to exist at all...or maybe just perpetually high as a kite on its own fumes. That's pretty much how koalas live their lives on their intoxicating diet of Eucalyptis leaves, so why not Koffing? 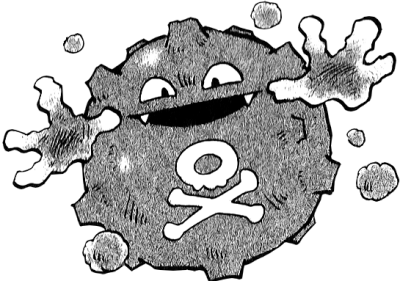 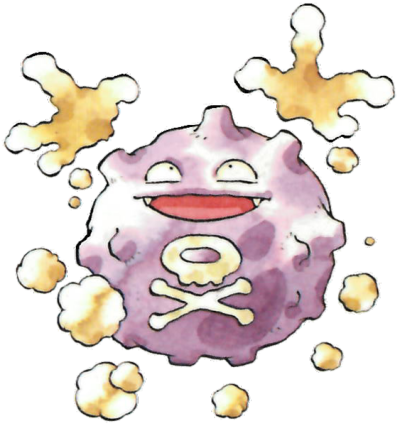 It's interesting to point out that in Koffing's older artwork and a few manga appearances, it looked like it was actually forming a pair of "hands" from its own smog. Whether they simply forgot about this or chose to drop it for simplicity's sake is anyone's guess, but it definitely added an extra dimension to the little guy, and it might have been nice to see the "smog hands" show up at least sometimes, maybe for its physical attack animations? 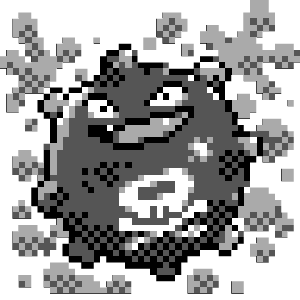 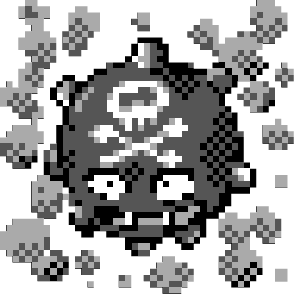 More famous and maybe even more interesting is the disparity between Koffing's official design and its original red/blue sprite, though as many of you know, the Japanese games originally came in red and green versions. The earliest, green-exclusive Koffing sprite featured its more familiar design - including the lost hands! - while the "updated" sprite used for the red and blue games placed the jolly roger above the creature's face.

The "more accurate" sprite came first, so this wasn't likely a mistake. The intention was probably that Koffing weren't all perfectly identical, being unnatural creatures to begin with, and I really wish this was still a thing. There's a certain spark of fun you're bound to lose when you standardize a character to be "on-model" in every appearance, and it isn't even how real living things work, let alone genetic abberations spawned from a polluted world.

Koffing should totally come in two or three face variations again, and so should a fair number of other pokemon, for all sorts of reasons. As I've said before, this kind of thing woud be easier than ever now that the models are in 3-d! 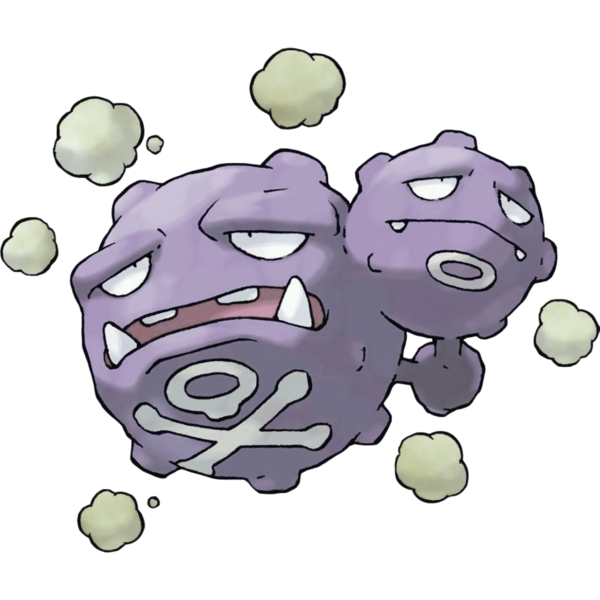 So, moving on from Koffing, we have its fantastically unwholesome evolution, Weezing, which remains to this day one of only a couple pokemon you can really look at and think "wow, this is definitely not healthy." Even ghost-type pokemon have never really looked this ghoulish, and I can't think of any other pokemon that immediately reads to me as biologically malformed or "mutated."

Weezing is only supposed to be two Koffing that gradually melded together, and that could have easily been as simple and straightforward as Dugtrio or Magneton, but instead we get a smaller Koffing hanging like a goiter off its larger, tusk-faced twin. It's the amount of asymmetry in this pokemon that makes it so, so cool; the way the faces differ, the way one of the skull marks is simplified down to a ring and especially that third, vestigial nodule hanging between them, almost as if they're beginning to grow another little Koffing. With those rigid bars of flesh linking the three, I always thought Weezing looked a lot like a giant "molecule." 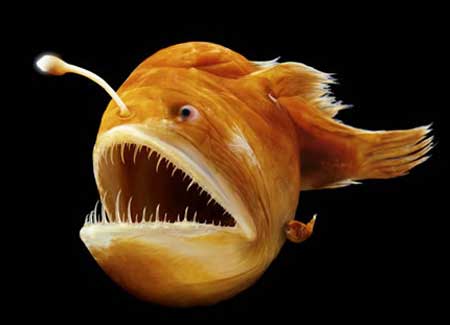 Other things Koffing and Weezing bring to my mind include meteorites, cartoonified "germs," puffballs, spores, flying warts, and a surprising amount of deep sea anglerfish. You see it, right? The bloated shape? The underbite? The very fact that they fuse together? If we ever got an evolution for these guys, I'd love to see a little "lure" dangling off the top, or maybe an eyeball on a stalk that just sort of implies one.

Koffing and Weezing are at once elegantly simple and staggeringly creative creature designs, to say nothing of how creepy-cute they are. They're the madballs of Pokemon!