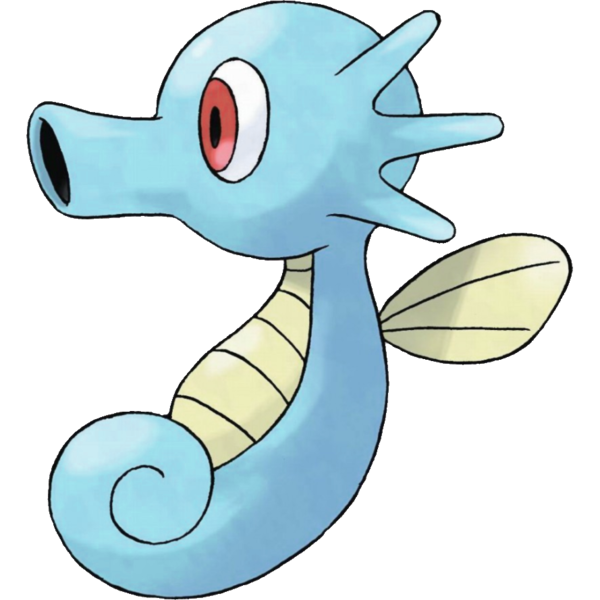 I seem to forget an awful lot that this line exists, and I don't know why. It's one of the most conventional creatures I can recall actually training in the red/blue/gold/silver years, and seahorses are innately cool as heck. They look like nothing else. They're fish and they look like bent chameleon worms. Seahorses are BONKERS!

As a pokemon, Horsea is a perfect representation of its basis and positively cute as the dickens. Maybe even one of the cutest things in the first gen? Look at that little face. Gosh! 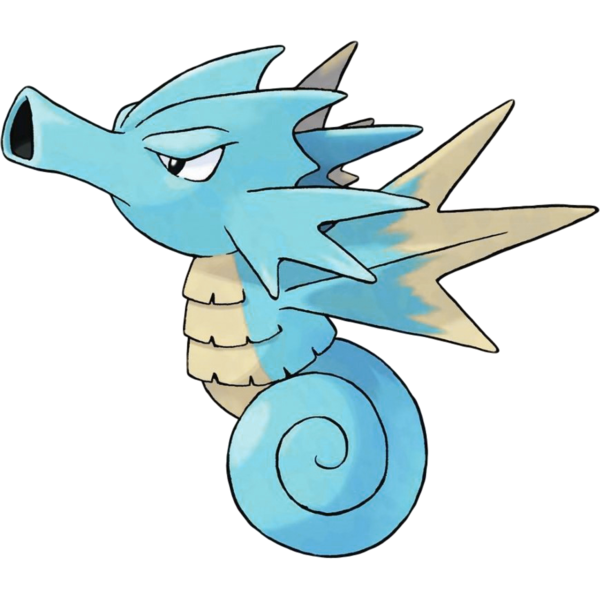 Horsea's evolution, Seadra, is pretty much all menace, but that's pretty interesting for a seahorse. This is a seahorse that looks as if it actually moves pretty fast and can do a lot of damage, and I was always kinda partial to its shingle-like body scales. 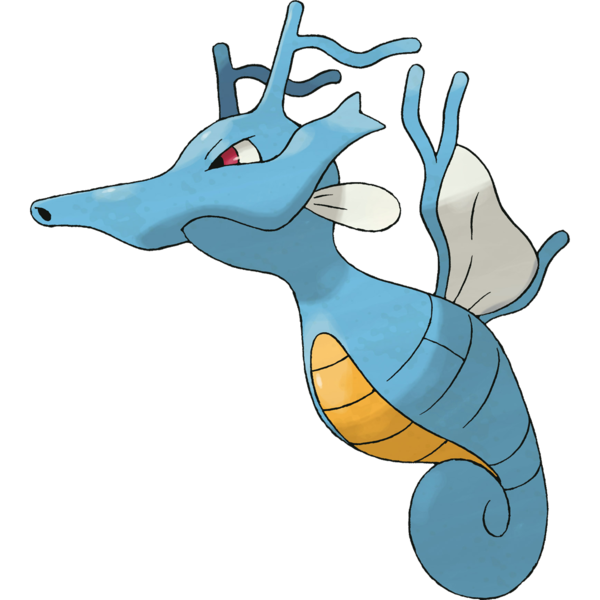 In the second generation, Seadra was given an unexpected evolution into the large and menacing Kingdra, which more closely follows the anatomy of a weedy sea dragon, not to be confused with the leafy sea dragon, which has a totally different pokemon we'll be getting to in like...a year I guess.

So, Kingdra is actually water/dragon type, the only dragon type introduced in gold/silver, and the first dragon type we're reviewing here. Sorry, Dratini!

Dragon is an interesting pokemon type, since it's not tied to any particular element nor to any biological classification. Dragon is just dragon. It's a type normally reserved for rarer, stronger creatures that trend towards reptilian forms, but have also included mammalian, avian, piscoid and even invertebrate forms. Interestingly, the only pokemon actually weak to dragon type moves are dragons themselves, but they're strong against the game's four most common elements: electric, fire, grass and water. For a long time, their only other vulnerability came from ice moves and only steel types were resistant to them.

All this finally changed with the introduction of fairy types in Pokemon X and Y. Not only do fairy moves do double damage to dragons, but fairies themselves are immune to dragon attacks, which were previously some of the highest-hitting, least resisted moves in the franchise.

Leave it to the likes of Jigglypuff and Clefable to put these rampaging beasts in their place.

The seahorses are pretty neat, and now I've got all my thoughts on the dragon type out of the way. Thanks, Kingdra!