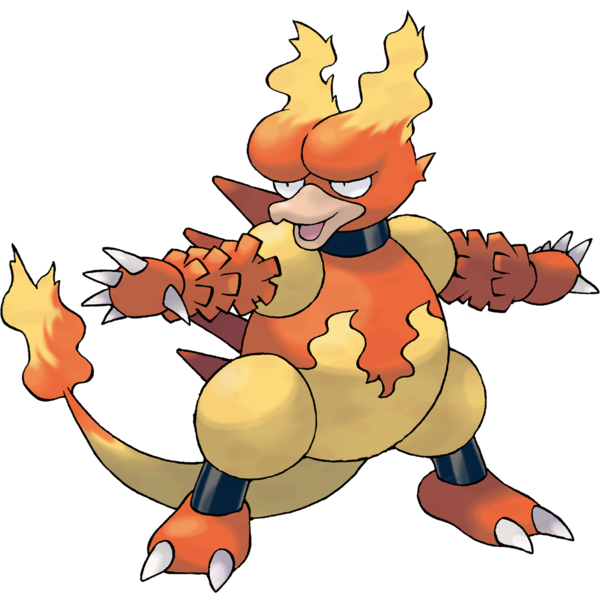 This is another pokemon line I actually gave its own review a few years ago, but we're starting fresh here, and I think some of my feelings on this family have even shifted in extremes! We'll see, I guess.

So, Magmar. Pretty much a fire-type sibling to Electabuzz and a sort of nondescript "lava monster," but what a lava monster! I just adore those flaky, scaly arms, the weirdly duck-like beak and big, bulbous cranium. Yeah, it looks like it has a big flaming ass on its head, but I'm completely cool with that. I pointed it out before, but Magmar actually bears some strong resemblance to the evil Solarites from 1961's godawful The Phantom Planet, which were also fire-loving beings. It's probably coincidence, but it's one of my favorite pokemon-related coincidences...and maybe, just maybe, it really could be more than that? Who knows how many hokey sci-fi films Satoshi Tajiri and Ken Sugimori could have grown up on. My original review also made a comparison between Magmar and various enemies from the original Metroid, which I think is still apt. Magmar doesn't look like any of them specifically, but it looks very strongly like it could have fit in very well with them.

All in all, Magmar is a wonderfully freaky creature, just the sort of weird brute I'd expect to live deep underground in pools of molten rock. 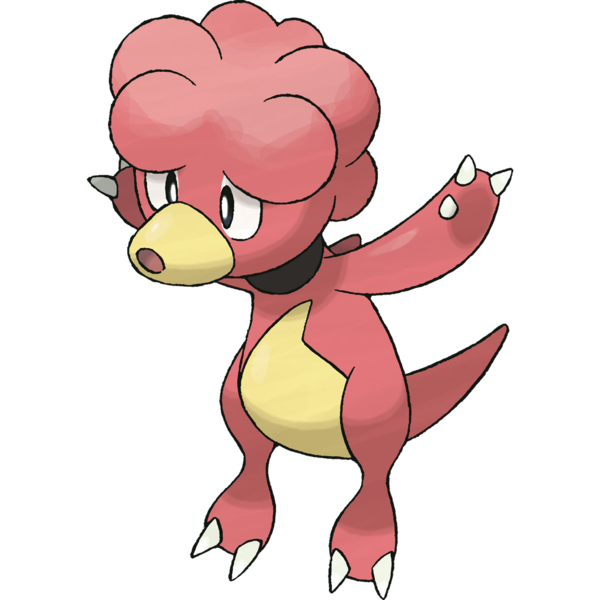 Later, Magmar was joined by Magby, which boils everything cool about Magmar down to a precious, flawless cutie-poot. The lumpier, blobbier head reminds me of one of those fancy, mutant goldfish, and I love the more tubular seahorse-looking beak, perfect for spewing little plumes of flame!

Magmar and Magby get a SOLID four from me. 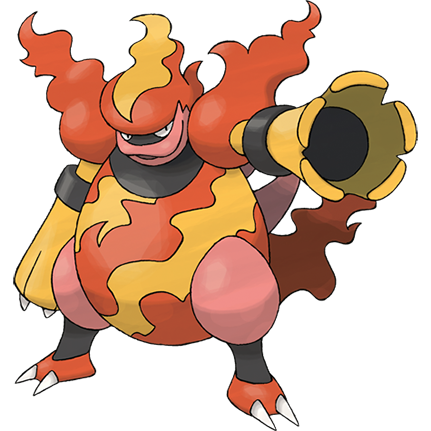 But then, there's Magmortar, added in Diamond and Pearl, and I want SO badly to like Magmortar, I really do. Magmar deserved an evolution, and there's an idea or two here that I genuinely like. The tube-hands are totally cool, and the face, when you think about it, feels a little more like a stylized platypus, and what WOULDN'T be cool about a fat, lava-dwelling platypus with cannon hands?

...But then I look back at Magby and Magmar's adorable, gloomy seahorse-duck-butt faces, and I just feel sad. Magmortar sucks all the unique personality out of this line, reducing a truly bizarre creature into what kind of feels to me like a poor knockoff of a Dragonball Z sort of villain. Even the flame on its head isn't drawn and colored as nicely as Magmar's, and while both Magmar and Magmortar have rather lazy, smooth egg shapes for torsos, Magmortar calls a whole lot more attention to it.

I'm sorry, Mortar. I tried. I loved Magmar so much that I tried to MAKE myself accept you, for his sake, but I can't. You will never be half the sweetheart and you have literally only half the ass face. For shame.