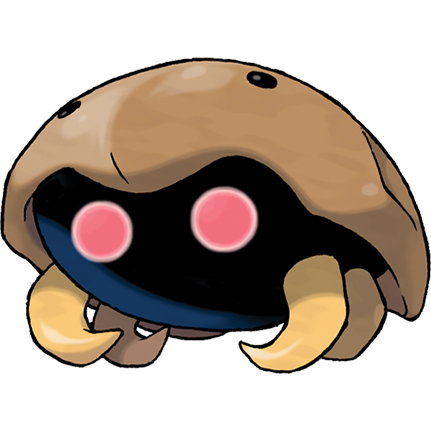 As much as I like Omanyte and Omastar, the dome fossil was always my first choice, which necronomicifies into the beautiful, precious Kabuto, another rock/water pokemon. Ostensibly, Kabuto is a trilobite, but it really doesn't look like one. It looks a lot more like a horseshoe crab, but still imprecisely, since it lacks their iconic tail. It's basically just one smooth, hard shell, with beady black eyes on top and bigger, eerier, luminous eyes underneath. That's definitely my favorite feature, the completely different "face" depending on which side you're viewing. 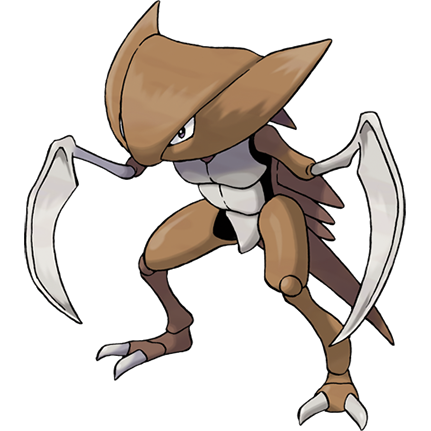 If you played pokemon not knowing what anything evolved into, Kabuto had to be an almost bigger treat than Magikarp. Kabutops is such a drastically different creature, but incredibly strange and almost outrageously cool. Look at this thing. This actually is trilobite-based, except it's also a reptilian biped with mantis-like sickle claws. With its chitinous plates and boomerang-shaped head, it's one of the most menacing and alien-looking creatures in the whole generation, not unlike the aesthetics of Tentacruel. In fact...

Don't they go together perfectly? Squishy tentacles and spiny chitin. Peanut butter and jelly. They could both pass for different flavors of space monster, too. If I played with these two on my team, I could only ever nickname them Wells and Giger.

What really strikes me about Kabutops, however, is its "speculative evolution" aspect. What we're basically seeing here is the answer to the question "what if trilobites didn't go extinct...and took over the planet?" It's a trilobite as an apex predator, a trilobite even adapted to walk upright on land.

You could even argue something similar of Omastar, the way it stands on its two lower tentacles. Both of these pokemon lines take a "what if?" approach to their real-world inspirations, and it's SO so cool. I think it might have been even cooler if their evolved forms were supposed to be "new," that is, only started to evolve after Omastar and Kabutops were brought back from extinction. I feel like that's kind of a missed opportunity. I guess if that were case, though, we wouldn't get to gawk at a Kabutops skeleton in the in-game museums. Why does a trilobite have bones? I guess because it's a trilobite-like pokemon, rather than a real arthropod. Famously, some game-breaking glitch pokemon wound up using the Kabutops skeleton sprite, and it's just a crying shame we can't have a skeletal creature like this as an actual, viable pocket monster.

The killerbite is one of those "pretty much objectively cool, for a fact" pokemon. Nobody hates Kabutops.