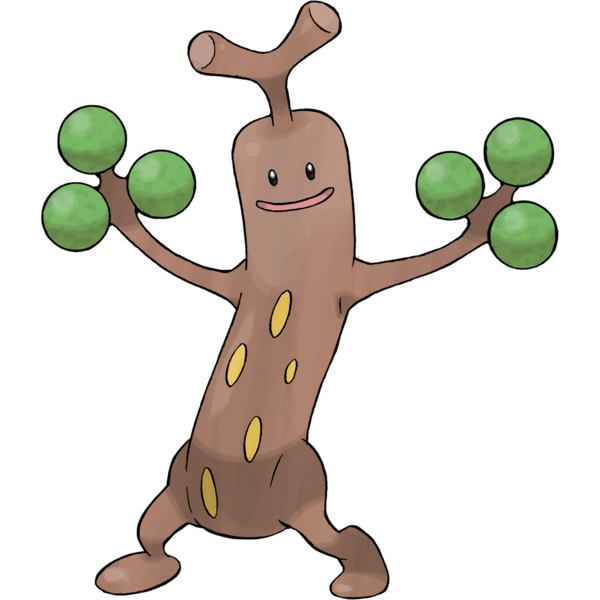 SUDOWOODO! I love this thing so much! Is anyone reading these who actually doesn't know their pokemon? First, I appreciate that you're reading these anyway. Second, can you guess what kind of type Sudowoodo is? You probably said grass type, or since you don't know your pokemon, maybe you called it "plant" type, which it should have been anyway.

But no, Sudowood is a pure rock type pokemon. It's in the name! Pseudo-wood! It's a pokemon that imitates a plant, without actually having any biological relation to a plant, just like countless insects, reptiles and other creatures do for protection from predators!

I love, love the concept of a pokemon looking like it belongs in a different type as a protective camouflage, and it's especially clever in Sudowoodo's case; all of a grass pokemon's weaknesses are either neutral or outright resisted by a rock type, and vice versa. Actually mistake Sudowoodo for grass, and you might waste a fire, flying or poison move instead of the grass, ground or water attack that would really seal its doom. Rock type movies even do double damage to bug types, which would be the most common "predators" of a grass pokemon, wouldn't they? Brilliant. You ever wonder if that might be a lure? What does Sudowoodo eat? I can find no mention in the pokedex, so I'm just gonna assume it eats insects who try to munch its phony foliage. Its phoniage.

Besides the awesome base concept, I really love just how strange Sudowoodo looks. It almost makes me think of an elongated frog or toad, I guess because of those big, bulbous green fingers, while the horn on its head looks more like that of a beetle. It's not a design that takes any obvious route to resembling a tree, and I really admire that. There's such a believable quality to the crudeness of its camouflage. 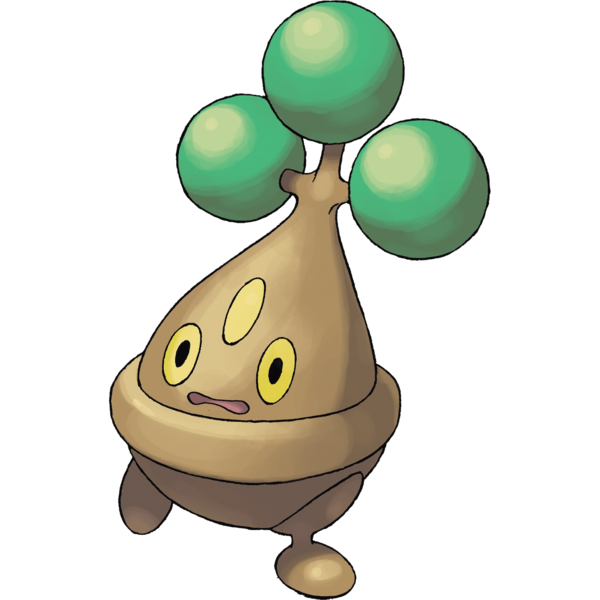 Sudowoodo received a "baby" in the fourth generation, Bonsly, which really looks like a bonsai tree in its own little pot. That's adorable! It's just too bad we didn't get an evolved Sudowoodo to go with it, like when the fourth gen brought in a slew of evolutions for other neglected classics. I still have a gut fear that regular evolutions have been completely phased out in favor of mega evolutions, but I guess we'll see what the seventh generation brings us. Personally, I'd like both for Sudowoodo, but I hope whatever course it might evolve, it doesn't get too much better at its mimicry. I'd hate to see an end to that subtly-tree-like-frog-man schtick.

On a final note, it's cute how Bonsly moves a little more in its animation, but Sudowoodo stands perfectly still. It's like it learns a little better to hide as it grows up!

An insidiously creative concept for the setting, executed with a uniquely odd and endearing design.