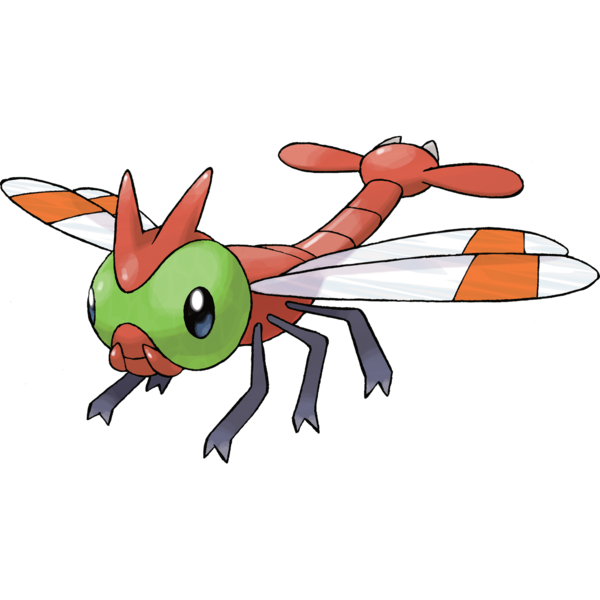 We finally come to something great, though its full greatness would take some time to realize. In Gold and Silver, this bug/flying dragonfly would be another non-evolving, obscure one-off that few people trained or ever really remembered, but it already had such a lovely design. Yanma is one of those bug types that follow more or less correct insect anatomy and still simplify it down to some basic shapes any kid can wrap their head around.

My only critique is that Yanma could have used a flightless, bug/water prevolution, like a real dragonfly. The realistic life cycles of Beedrill and Butterfree felt like they added so much to the first generation. I suppose it's also a little odd that Yanma's eyes are so tiny, when a dragonfly's massive wrap-around eyes are such an immediately noticeable feature, but I always kinda took Yanma's little eyes as more "symbolic," like the whole green part of its head are its real eyes. 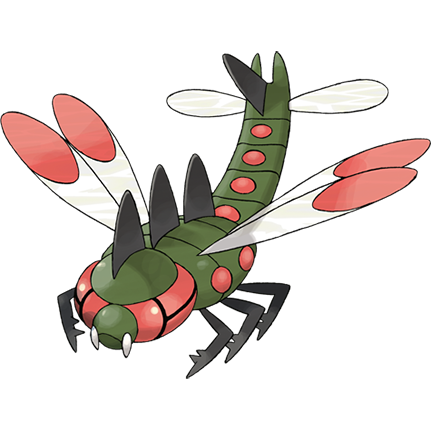 Poor little Yanma would wallow in obscurity until Diamond and Pearl, when it finally evolved into Yanmega, which is hands-down one of the coolest looking bug types and quite high on the list of coolest looking pokemon in general. Yanma may be precious, but dragonflies are above all else predatory, and Yanmega really looks the part. This is a BIG, dangerous, carnivorous insect straight out of a primordial swamp, named after the giant Carboniferous dragonfly Meganeura.

I love when realistic insects are played for cuteness, which Yanma had in abundance, so perhaps I should be more disappointed that Yanmega aims for pure menace and terror, but it's just too gorgeous. The contrast between the army green and the red markings, the more appropriate insect eyes, even the way those black spikes down its back seem to exist only to make it look more "prehistoric" as a very small child might understand the concept.

Yanmega just oozes pure coolness and fun from its every segment, pretty much the pokemon for anyone who wants an insect that not only really really looks like an insect, but looks like it could hold its own against the starter pokemon or the average legendary, and that's not even all that far fetched; it has both impressive offensive stats and fairly high speed, with an additional free speed boost every turn thanks to its ability.

It's just too bad this is a fourth-gen evolution, which means one of the best fully-evolved things we get to review for the second generation wasn't even introduced with it. It's sure gonna be weird when we get up to the Diamond/Pearl pokemon and we end up skipping almost quarter of them, since we'll have already covered all these evolved forms. I definitely don't regret doing it this way, though; it lets us compare designs across generations from the very start, not to mention gives me a whole lot more to talk about on what were otherwise single-stagers.

What's not to love about a giant, monstrous prehistoric dragonfly?