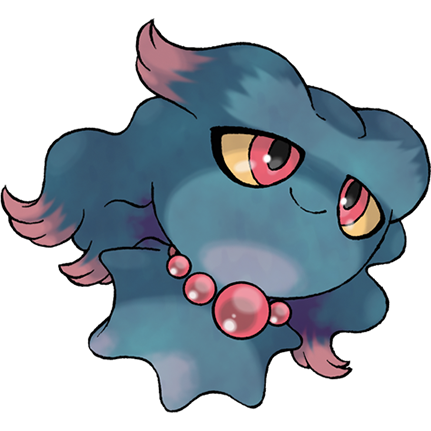 With only a single ghost-type line in the first 151, the prospect of at least one new ghost was almost as exciting than the addition of entirely new types...though I was more than a little disappointed when it turned out to be exactly one ghost.

Still, Misdreavus is a very nicely designed and endearing little phantasm. It's actually supposed to represent a banshee, and was once the only pokemon capable of learning perish song, an ability which automatically faints Misdreavus and its opponent in five turns. Nasty!

I appreciate the fact that, unlike Jynx, Misdreavus are not presumed to be exclusively female just because they have little dresses, flowing hair and pink pearls, or even the fact that banshees in mythology are always the ghosts of women. These are monsters, after all. There's no reason for them to be bound by human gender norms, especially considering there's no reason for humans to be bound by their own gender norms.

I also have to say that I especially like Misdreavus's eyes. They're nicely colored, nicely shaped, and low enough on its face to be exceptionally cute. This is a key to cuteness a lot of cartoonists don't seem to realize; lay the eyes and mouth out on a single line if you really want something to look innocent. 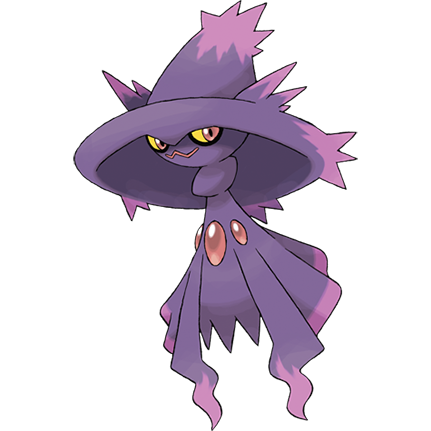 So, once again, a formerly single-stage pokemon received an evolution in Diamond and Pearl, and once again, it's rather divisive. Mismagius does lose some of the pleasing flow of Misdreavus's design, with a more solid looking "witch's hat" and an unnatural looking jagged mouth, but you can put me firmly in the pro-Mismagius camp. It's still a ghostly banshee, but it's also a floating witch without any arms or legs, and it even retains those lovely eyes I was just talking about.

I'm glad this comes immediately after the butchery of Murkrow. It almost washes it away. Almost.

A funny thing about Mismagius, though, is how bizarrely people continue to misinterpret its anatomy, even on its own Bulbapedia page! (At the time of this writing, anyhow)

...What "lump" in what "long neck?" You mean Mismagius's *TORSO?* Does anyone really not realize Mismagius is an armless, hourglass-shaped humanoid? Do I need to illustrate where Mismagius's limbs would go if it had limbs? Just because said torso is a strange, football-like shape that protrudes out through the monster's back doesn't mean it's not still distinctly a torso. Even the fact that it uses the "dress" as arms in the anime doesn't change that its shape is still definitely meant to represent a skirted human-like form.