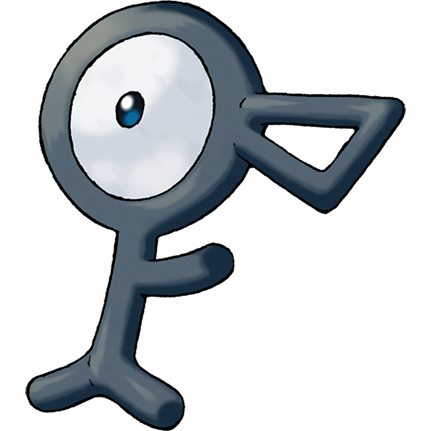 For the first time, we come to a pokemon so totally weird that even I tend to forget it's a pokemon at all, but every time I remember the existence of Unown, I'm charmed all over again. Learning only the move Hidden Power, these little psychic-type sweethearts are all but useless in battle and seldom exist as little more than a collectable gimmick, but the whole idea of these mysterious, ancient creatures who happen to resemble floating, one-eyed runes is just cool as heck.

There's an Unown representing every letter of the English alphabet, plus two punctuation marks, for a total of 28 distinct forms, and as if I couldn't love them enough already, every single one has a completely unique animation in X and Y:

EEEEEEEE! LOOK AT THEM GO!!! THEY'RE HAVING A LETTER PARTY!!! THEY'RE SO HAPPY TO BE ALL THE LETTERS! My personal favorite is cute little Y gently waddling in place, but N is just killing it on the dance floor. S and Q are really getting into it too, X is just having a great time watching everybody else, and P...well...nobody knows what P is doing, but we're all very supportive of it.

It's interesting to have pokemon that strictly exist to be sort of a weird presence rather than viable fighters, but I obviously wouldn't mind if you could bring an Unown to a pokemon battle without getting laughed at.

A lot of cool ideas for Unown evolutions or mega evolutions can be found around the internet, but personally, I think you should be able to build a pokemon from Unown. Each one could offer a different move, allowing you to put any four together (with some vulgarity filters in place, I guess) to function as a single, powerful psychic type with those four different moves. By default, this could be a balanced defensively-oriented pokemon, but the addition of the question mark Unown could make it specially offensive, while the exclamation mark would pour more stats into physical attack.

Another possibility? The moveset, ability, stats and even typing of your Unown could all be determined by the actual word they spell out, with a long, secret list of possible combinations for players to discover on their own...