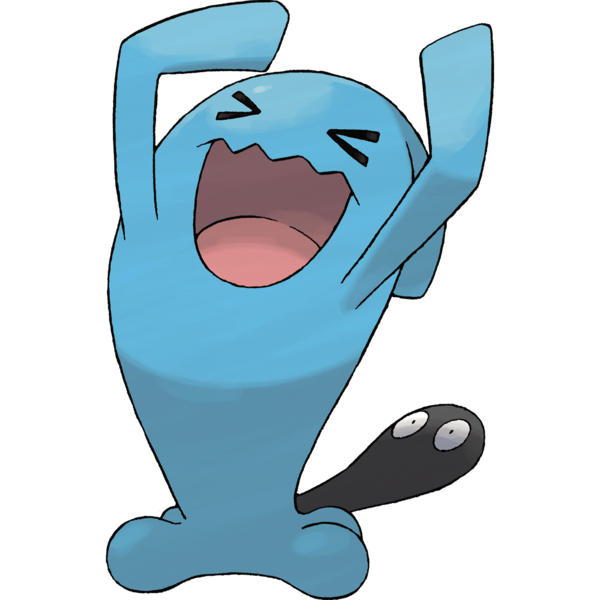 THAT'S RIGHT!!! IT'S TIME FOR WOBBUFFET! The pokemon so hilariously quirky and delightful, it's the only one Team Rocket has hung onto in the anime - besides Meowth, of course - for more than one generation, having remained by Jessie's side (whether she likes it or not) since 2001 and counting. At this point, Team Rocket without Wobbuffet would be blasphemy of the highest order.

...So what the hell IS a Wobbuffet? Even after all these years, it's still a good question.

Known as Sonansu - which sounds exactly like "that's right!" - in Japan, Wobbuffet is a bright blue, rubbery bag-like psychic type with an adorably pained expression not unlike a ghost about to go down Pac-Man's throat. Fascinatingly, it debuted as one of the only known pokemon limited to exactly four possible moves, the maximum number any pokemon can know at one time. This means that every single Wobbuffet once had a strict, pre-determined battle strategy, and a pretty interesting one to boot, so we may as well go over those four classic moves for those who are just tuning in to this whole "pokemon" thing:

In a nutshell, Wobbuffet is a pokemon capable only of either defending itself or deflecting damage, rather than making a first strike of its own. This makes perfect sense out of the creature's design, too. It's a punching bag! Literally AND figuratively!

Wobbuffet's gimmick was admittedly rather tricky to pull off, but once the third generation rolled around, Wobbo became downright terrifying. This was due in large part to its new ability, shadow tag, which makes it impossible for an opponent to escape or switch out. 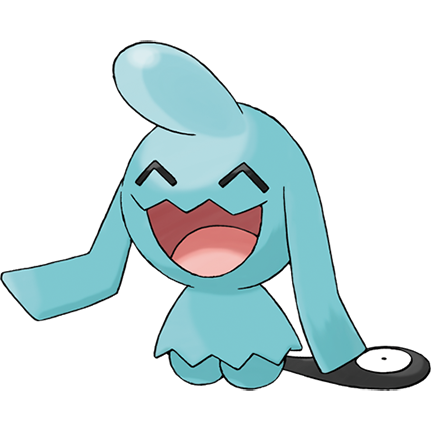 The other thing that rocketed Wobbuffet to the top of competitive banlists for a while was the addition of its baby form, the adorable Wynaut, who gets to learn three additional moves before evolving into Wobbuffet. These are:

SPLASH: doesn't do anything at all.
CHARM: greatly lower's the opponent's Attack stat
ENCORE: forces the opponent to repeat the last move it used for 2-6 turns.

"Charm" is actually just as useless on these guys as "splash" - you don't want to lower the opponent's attack if that's what you need to bounce back at them anyway - but encore can pretty much seal an opponent's doom. Once you lock them into the same attack for a few turns in a row, you can just keep using the appropriate physical or special deflecting move - or Destiny Bond when you're almost out of health - and trap them all the while with shadow tag.

It's a testament to Team Rocket's lovable extremes of incompetence that they've had a Wobbuffet all this time and still keep losing to Pikachu's thunderbolt, which everyone knows by now is a special move. 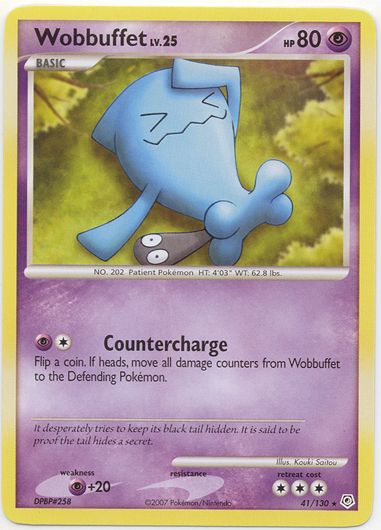 Their creative, thematic fighting style aside, the most interesting thing about Wynaut and Wobbuffet is the nature of their "tails," which the pokedex alludes to repeatedly:

So this "tail" with some important "secret" obviously has eyes on it, Wobbuffet tries to keep its "tail" hidden in the dark, and it will thrust the rest of its larger, more conspicuous, sturdier body directly into harm's way to protect its "tail" at all costs. Isn't it obvious we've been looking at Wobbuffet backwards? That the "tail" is its actual head? In the Pokemon Stadium games, those eyespots are even animated to "blink" periodically, and in many poses, it even appears to be using them to look around. The "punching bag" certainly must contain some or even most of its other organs, since that's the part that eats, but the creature apparently considers most of its body expendable.

Wynaut and Wobbuffet aren't just big, rubber bag monsters with beaver tails, but tiny, black, presumably very fragile flatworm-like creatures, which protect themselves with a much, much larger, balloon-like "false" body, or perhaps what we can think of as elaborate, inflated mouth parts. How clever and just absolutely darling is that!?