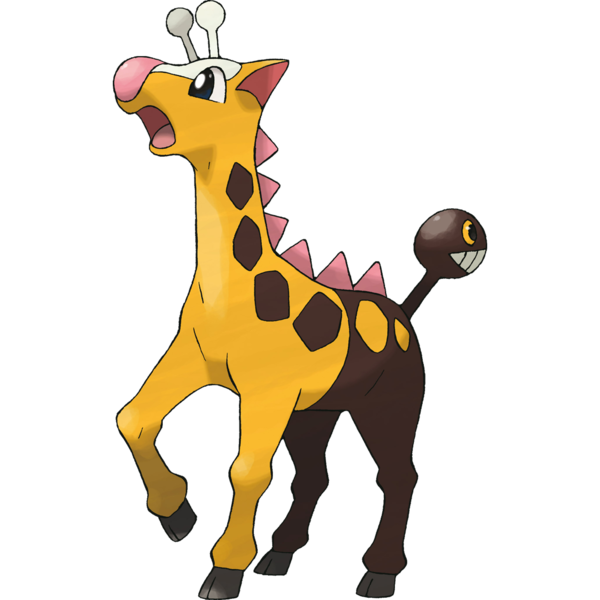 There are a few things of interest regarding this unevolving one-off. For one thing, that second head on its tail is simply delightful, like one of those chomps from Mario, and I really wish we had a fully evolved pokemon with a face like that. Apparently, the tail has its own crude little brain and will reflexively bite anything approaching Girafarig from behind, which is a pretty neat defense mechanism.

What's even weirder about Girafarig is its typing. It's both normal and psychic type, which means that for the first five generations, this was the only normal-type pokemon paired with any other type besides flying. This is, as we've discussed before, because the normal type inherently indicates a lack of any elemental powers, but I guess what's going on with Girafarig is that its front half is a normal type and its rear head is psychic? I don't even know. It doesn't even look like it should be psychic so much as dark, which even thematically fits a nasty, bitey little secondary head.

Some fans believe Girafarig references the obsolete but still charming hypothesis that some dinosaurs, particularly Stegosaurus, had secondary brains in their tails, and Girafarig certainly has rather saurian-looking spikes down its back. I'm not so sure if that was the intent, but it's an interesting interpretation.

Girafarig seems like a prime candidate for a mega evolution down the road, but I'm going to be very disappointed in gamefreak of Mega Girafarig doesn't emphasize the chomp-head, maybe even make it the bigger head and turn the whole pokemon around? It'd certainly live up to having a palindrome for a name, at least.

The very last anecdote I can come up with about Girafarig is the confusion it caused in early leaks of the second generation. It comes immediately after Wobbuffet, both are psychic types, and both have small, black tails with eyes on them. Naturally, many people assumed there was some sort of relationship here, or even that Girafarig evolved from Wobbuffet. How anybody rationalized a giant blue rubber evolving into a giraffe, I can't even begin to guess, but it's also rather interesting to point out that both of them come immediately ever the Unown, which are also psychic types, and also just small, black shapes with eyes...what might be going on there?

Even without an evolution, Girafarig was a neat little experiment in pokedom.