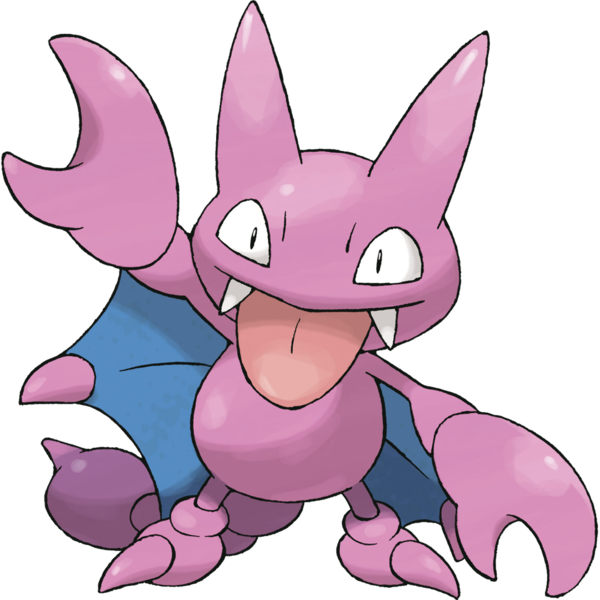 How wonderful in every single way is Gligar? When we first saw this thing in a leak way, way back when, we all jumped to the presumption that it was a Golbat evolution, and it certainly would have been fascinating for the flying/poison bat to evolve scorpion characteristics. It would have even made sense of its typing! Boy were we surprised when Golbat actually had a completely different evolution in this gen, and the bugabat here turned out to be a flying/ground type.

The very idea of a gliding scorpion-bat hybrid is amazingly unique among Pokemon. Rarely has the franchise simply hybridized two totally unrelated animals in such a blunt, straightforward fashion, a chimeric mashup straight out of some medieval bestiary, and it's a combo that works so well. Bats and scorpions haven't a single thing in common, yet their fusion here feels weirdly natural, and its aesthetic execution is just terrific. The lovely shade of blue and purple, the huge pointed ears and the razzing tongue make for such a stylish, immediately recognizable design that I can't help thinking of Gligar as one of the "core" pokemon, like Pikachu or Mewtwo or any of the starters.

According to the dex, Gligar's preferred mode of attack is to latch on to an opponent's face while it stabs them with its venomous tail. That is hilarious.

And you know what this whole thing has always brought to mind for me?

The legendary chupacabra has only been around since 1995 and has never been given any scorpion-like characteristics, but it's certainly a desert predator commonly portrayed with bat-like features, sometimes just a full-fledged Chiropteran, and early depictions even gave it gliding membranes. Sometimes it was even said to have both protruding fangs and a long tongue. I'm not gonna claim that Gligar is consciously supposed to be Pokemon's equivalent to the goatsucker, but that's always been where my thoughts wander off to.

Gligar is also our fourteenth pokemon to have suddenly evolved in Diamond and Pearl... 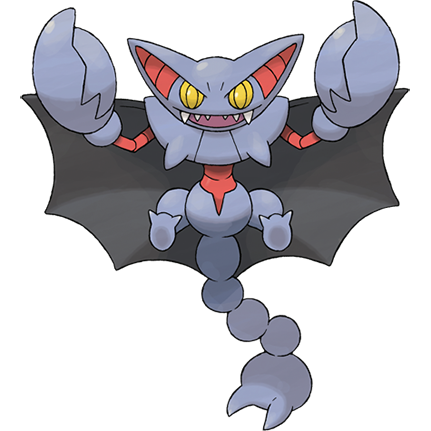 GLISCOR feels like a pokemon scientifically impossible to not find cool on some level, exaggerating both the bat-like and scorpion-like elements of Gligar without shifting the balance too far in one direction or becoming too messy a design, looking more than ever like a monstrous bat with an exoskeleton. I kinda miss Gligar's shade of purple, but I love the contrast between Gliscor's grey-blue and its redder, segmented elements, like softer flesh between gaps in its chitin. The gothic-looking cape in place of its wing membranes makes it look significantly more vampiric than any other bat-based pokemon, and I love those round, intensely yellow, cat-like eyes, which add a touch of crazed menace to what's already one of the deadliest looking of all pocket monsters.

Gliscor doesn't even just remind me of a goatsucker, but of basically every weird and terrifying cryptid, urban legend and local bogeyman out there, the kind of thing a sleepy desert town might concoct to thrill tourists and scare the daylights out of kids. It doesn't directly reference any such thing, but feels like it would have an invite to the same party as the Jersey Devil, Mothman or the Snallygaster, is what I'm saying.

Until the fifth generation sort of pushed it just barely aside, Gliscor was even one of my go-to team members. There aren't a lot of Halloweenier looking Pokemon.