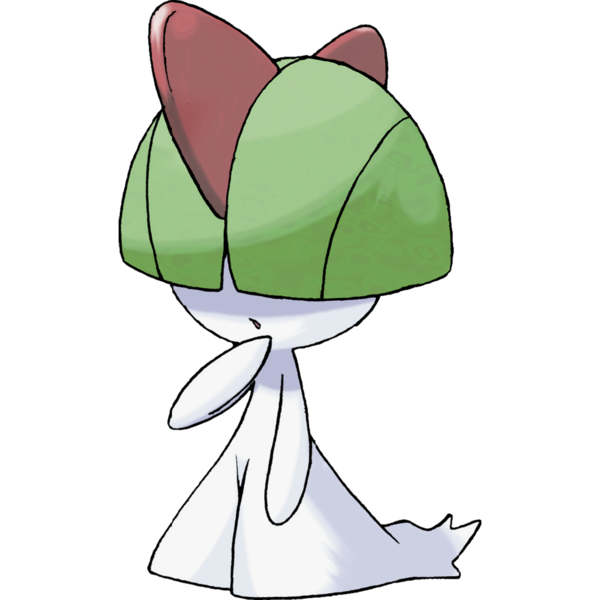 If you've followed me long enough, you might expect me to tear into today's pokemon line, but truth is, my feelings about the Ralts family are pretty mixed, and more positive than negative.

Ralts itself is a strange little psychic type, more recently upgraded to both a psychic and fairy type, and I really dig its style. I have no idea what the green and red parts of these pokemon are supposed to be - if they're skin or keratin or chitin or what - but I like that we usually can't see this one's eyes. It's a shy, shuffling ghost-kid with a dorky bowl cut. It feels fairly suitable for a creature that apparently senses the emotions of other beings and tries to avoid confrontation.

The name, which is the same in both Japanese and English, seems to come from "Waltz," though in a few other countries, it's called Tarsal, which also refers to a bone, but here it's probably meant to be an anagram of astral. 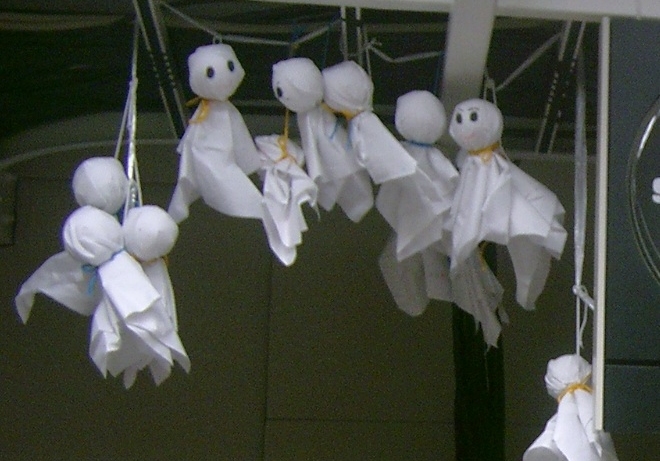 If Ralts (and even its final evolution) have any particular visual inspiration, it's more than likely a teru teru bozu, which, if you're not familiar, is a small ghost-like doll traditionally said to ward off rainy days. "Teru" is basically the verb for sunshine, and the name can sort of be translated as "sunny sunny monk." The third generation seemed to have an obsession with these things, probably because this was the generation that introduced weather mechanics to Pokemon, so there's actually three entirely different, entirely unrelated pokemon lines in Ruby/Sapphire that seem to draw some inspiration from sunshine monks. 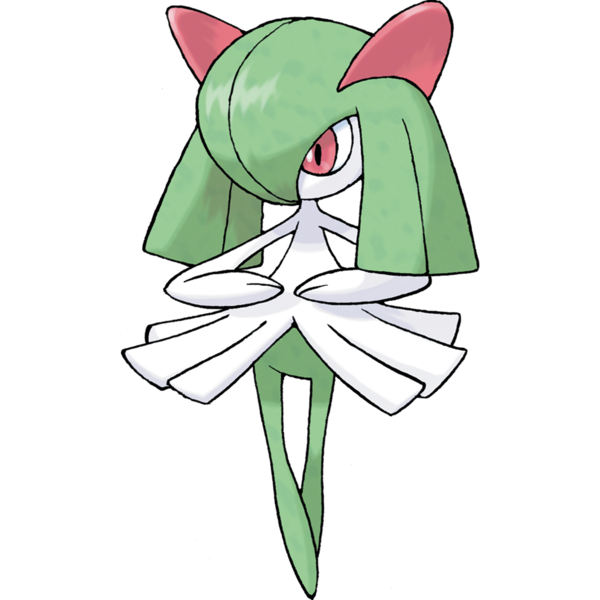 Anyway, this is another case in which everything I liked about a first stage is abruptly dropped, but it's interesting how this pokemon goes from awkwardly shuffling on its oversized...pants?...to an agile ballet dancer, Kirlia. It retains the theme of sensing human emotions, and its name is an especially obscure and interesting reference. Kirlian photography is an imaging method often connected to quack "psychic" research, allegedly revealing the emotional auras of living subjects. 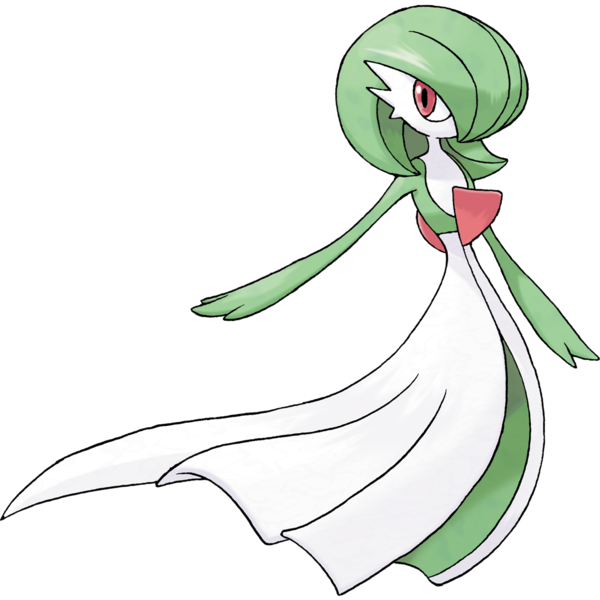 ...And then, we FINALLY reach Gardevoir, the pokemon that changed the fandom forever. Perhaps even moreso than the Eevee line, there are people into Pokemon almost strictly out of raging nerd lust for this big-eyed tissue phantom. It certainly doesn't help matters that its official title is "The Embrace Pokemon," and that its personality gimmick is an undying emotional devotion to its human trainer, even willing to sacrifice its own life for their protection.

Isn't the relationship between trainer and pokemon already weird enough? You either beat them up, capture them, and train them into an obedient pet or you breed them, hatch them, and raise them from babies into an obedient pet, except this one falls head over heels in love with you and also happens to kinda maybe look like some kind of anime person in a dress, if you squint. I guess that's why, having just checked so you don't have to there are currently three thousand, eight hundred and fifty pornographic images of Gardevoir on the rule 34 website alone, and that number goes up every day, so it's already going to be massively out of date by the time you read this. 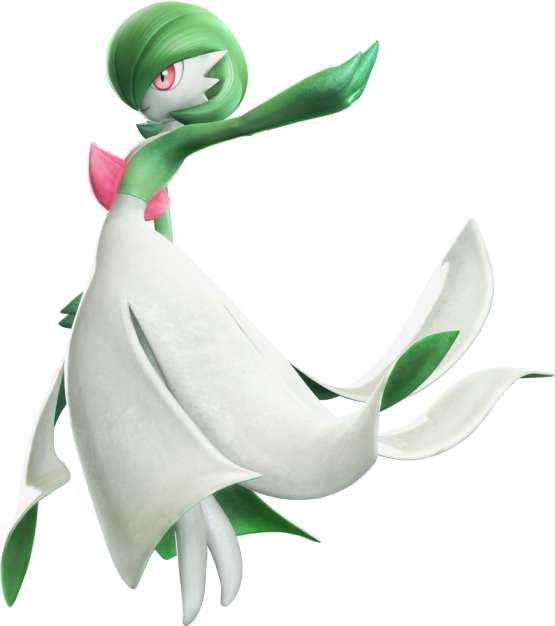 ...But, okay, whatever. It's neither Gardevoir nor Gamefreak's fault that everybody and their grandma apparently wants to fondle that jutting, pink sternum, or whatever the hell that's supposed to be, and I'm certainly in NO position to poke fun at anybody for finding a cartoon monster attractive. I just think this particular phenomenon afflicts Gardevoir a little more than makes sense.

In truth, and as you may already know, I actually really like the various pokemon resembling abstracted humans, and I love how this official model from the recent Pokken Tournament gives its "dress" such an unmistakably fleshy texture. Gardevoir has a sort of "angelic space alien" vibe to it I find intriguingly eerie; if its head were only onion shaped, you would have a nice "ballroom Flatwoods monster" motif going on.

It's a shame, though, that as soon as a human-like pokemon looks any goofier or more monstrous than this, it often plunges straight into countless "worst ever" pokemon lists around the web. Just ask Mr. Mime or poor Conkeldurr. 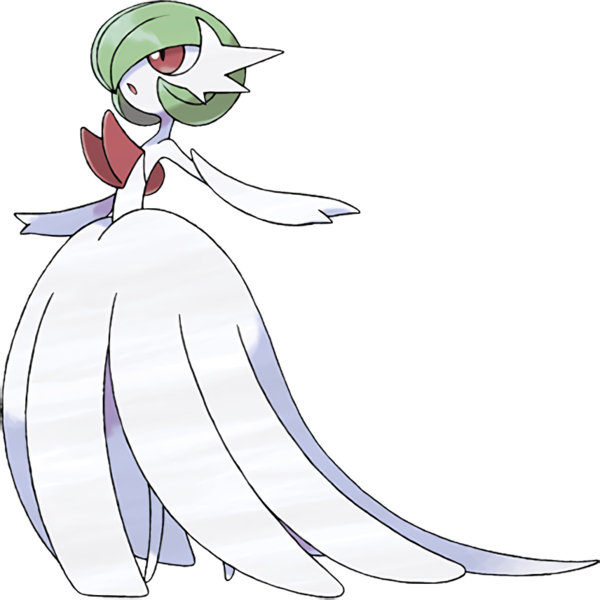 So, later, Gardevoir received a mega form expanding its slimmer dress into a whole ballroom gown, and weirdly splitting open its sternum-heart-thing. Perhaps the most interesting thing about Gardevoir's design, Mega or not, is how much it resembles a flower, especially an orchid, without actually being a grass type. Did you know there are actually quite a few orchids that imitate bees and wasps to fool them into "mating?" I'm not necessarily suggesting Gardevoir is some sort of vegetable siren that uses humans to perpetuate itself, perhaps for once-nefarious but now forgotten purposes if you subscribe to the possibility that pokemon were once engineered as biological weapons, but I'm not NOT suggesting it.

And despite the whole fandom constantly describing Gardevoir as "feminine" or "woman-like," Gardevoir is actually equally likely to be male or female at a 50/50 ratio. Nobody has to be a lady to wear a dress, and especially not when they're actually an alien monster with a skin cape.

In fact, and I can't believe I forgot to talk about this earlier, but Gardevoir's Japanese name is Sirnight. I guess the idea might be that Gardevoir is addressing others as "sir knight," but it's really cool to think of this spindly thing in a fancy gown as a "knight" itself, using the power of its emotions to protect its human trainer as surely as any sword.

Yes, that's right. Gardevoir isn't totally my style of monster, but I don't think it's terrible. In fact, I think it's pretty cool. It stands out, it's reasonably memorable, and it's nicely weird. 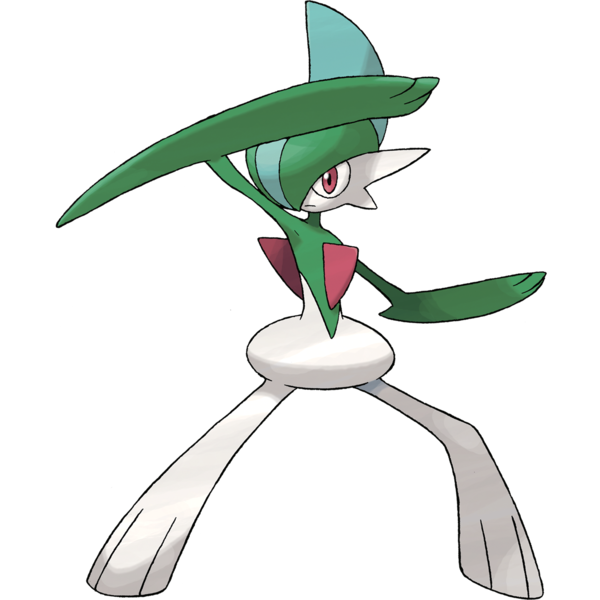 ...So, having just said what I just said, you shouldn't be surprised that I AM going to totally rip into this lazy idea. Gallade was introduced in the fourth generation as an alternate evolution for Kirlia, with bladed arms and an emphasis on physical offense.

That, in itself, is not a bad concept...but it's kind of boring and predictable, isn't it? We just went over why Gardevoir's "knight" interpretation is so interesting and unique, and here comes this completely conventional sword-swinger which, to add insult to injury, is male only for no reason I can think of. Even real knights weren't strictly male. 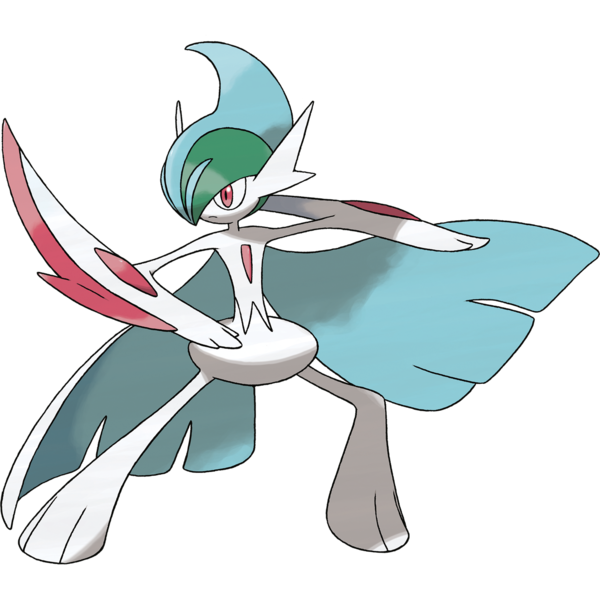 Oh, yeah, and then they gave Gallade a mega with a cape or whatever.

If you like Gallade, cool, I can see people liking it, but to me personally, it's a painfully predictable, arbitrarily limited split evolution that doesn't add anything worth adding to the Ralts line. Maybe I would like it if it instead wound up being Gardevoir's mega form, but as it stands, Gallade feels like unnecessary pokedex filler pandering to Gardevoir's explosive fandom.

Every list of the "laziest" pokemon concepts fails utterly if it does not include Gallade, but we already knew they failed utterly when so many of them included precious angels like Voltorb and Trubbish.