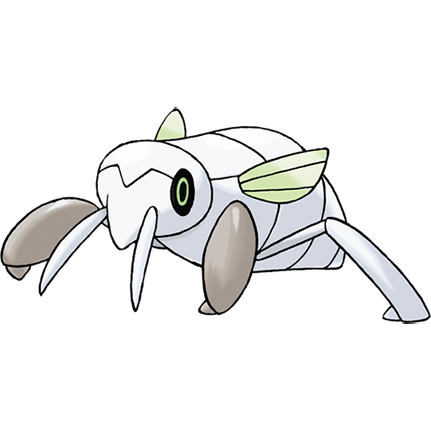 If you're even tenuously familiar with this pokemon line, I'm sure you know how excited I am to review it, and you probably aren't surprised that it's the first thing I associate with Ruby and Sapphire. This little cicada and its big surprise might be the biggest reason I can forgive the third generation's odd shortcomings, honestly.

We did already have a cicada nymph pokemon once before, the bug/grass Paras, which was also a lot cuter and more organically insectoid than Nincada, but that's alright. This bug/ground still looks great, with its eerie eyes, pale exoskeleton and vestigial wings. 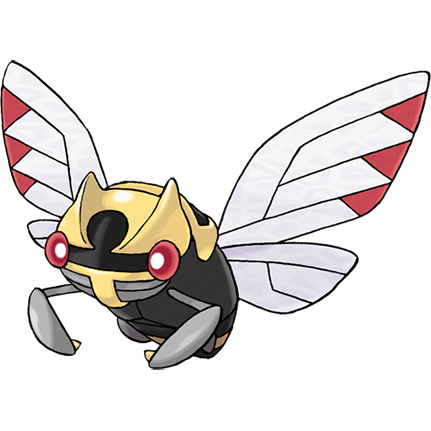 So unlike Paras, Nincada is free from any parasitic fungi, and undergoes a more natural transformation into a full-fledged, winged cicada. Ninjask definitely lives up to what I'd expect from a mature cicada pokemon, immediately recognizable as its insect basis. The fact that its head looks like a golden, futuristic helmet is an obvious shout-out to Sentai characters like Kamen Rider and various Ultramen, maybe even a little bit of Ultraman's arch-nemesis Baltan, which was literally just a cicada monster the studio modified with the addition of a horned helmet.

The Tokusatsu connection is more than just visual, too. Ninjask, as its name implies, is a ninja cicada, with the coveted "speed boost" ability to raise its speed stat every single turn. The pokedex lets us know that Ninjask moves so quickly and so stealthily that it was once believed to have the power of invisibility, and you'll usually only hear its ear-splitting cries before you ever see it coming.

A speedy little ninja-cada is a very cool concept, but it's by far not the coolest thing about the Nincada line, because it also comes with one of the weirdest hidden gimmicks of any pokemon evolution... 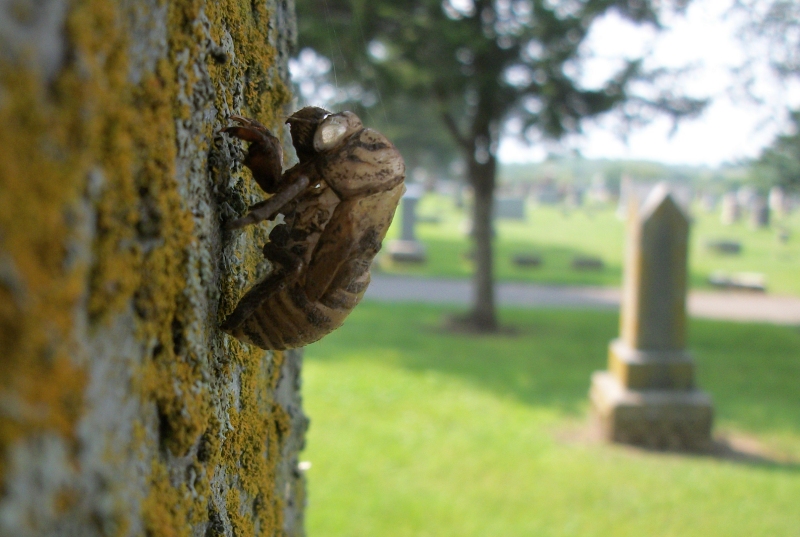 All arthropods go through molts, but none so noticeably as cicadas, which tend to leave their rather large exuviae - their old exoskeletons - clinging conspicuously to tree trunks and walls throughout the warmer months, all around the world. This is one I photographed myself, hanging off a tombstone in an Iowa graveyard, and that's especially appropriate for this review.

When Nincada evolves, it too leaves behind its old exoskeleton... 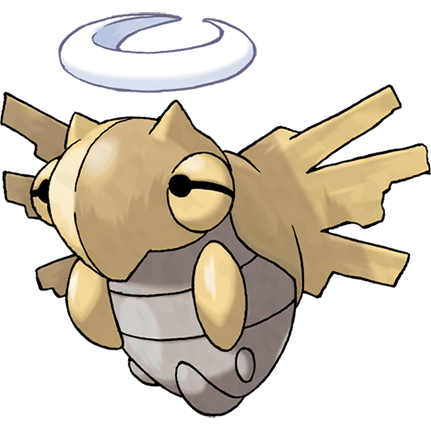 ...As the ghost (and bug!) type pokemon, Shedinja. An empty, unliving insect exoskeleton inexplicably possessed of some otherworldly consciousness. The chitinous phantasm will appear spontaneously in your team only so long as you have an empty slot when you acquire Ninjask, making this the only case in which one pokemon simultaneously evolves into two. I kinda hope it won't be the last time, because that's an idea with a lot more potential. What about a multiplying protozoan pokemon, each stage splitting until you've got three variants? What about a ghost type whose head comes off in its final stage, so you end up with a headless specter and a floating skull?

Wonder Guard makes Shedinja completely immune to any damaging attack that isn't "super effective" against it. As a bug and ghost type, that means Shedinja can be damaged solely by rock, ghost, flying, dark, and fire type moves. That's only five out of the eighteen types in the game, and it's entirely possible to get into a situation where the enemy team has no remaining moves that can touch this floating carcass.

It is, of course, quite the gamble to put a Shedinja on your team. It can still be killed by damaging weather effects, status conditions and the wildly popular "stealth rock," you can't be sure that an opposing pokemon isn't packing one of its weaknesses at a glance, and if your opponent already knows they'll have difficulty with the crunchy revenant, they're probably just going to forfeit the battle...and that's victory as empty as Shedinja itself. 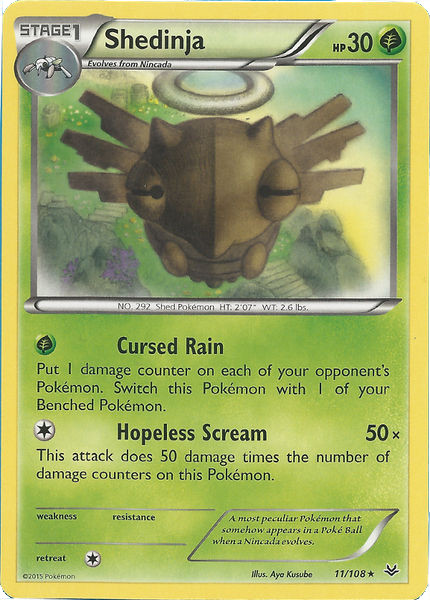 Moving on to its design, Shedinja has a very pleasant visual humility to it. It's a small, compact, drably colored creature that doesn't try too hard to look "cool," but there's a certain eeriness to its unassuming serenity. Imagine the player who doesn't even know what this thing is when it's sent into the fray, and their strongest legendary dragon, lacking the right damage types, is inexplicably helpless against this silent, staring, hovering shell of a monster. That's pretty disquieting, and speaking of which, how much do you love this TCG card's attack names?

I always liked how Shedinja has both a halo and blunt horns, which feel appropriate for something that sort of exists in a totally neutral limbo-state. It also does a fairly good job of looking hollow even from the front (more on that in a moment), the bell-like eyes really stand out, and I especially adore how it forms "wings" from the torn-open chitin on its back. 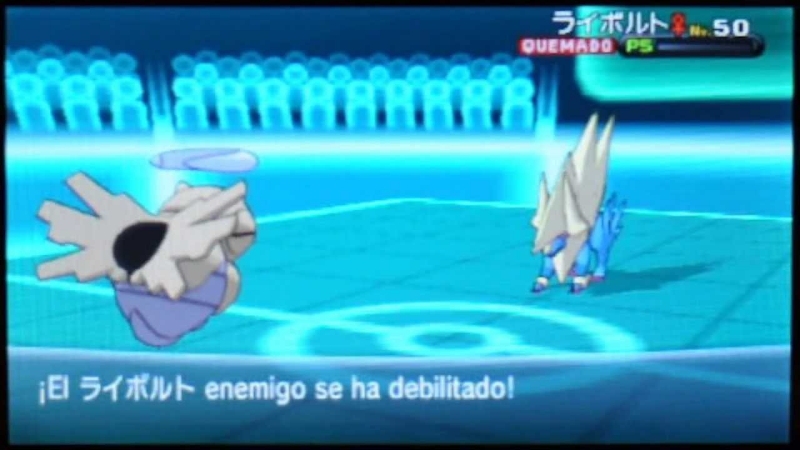 And speaking of that, Shedinja's single most striking design feature can actually only be seen from behind: a gaping, empty black void where Ninjask emerged from its old shell. That's creepy as heck, and the pokedex even says there's an old superstition that Shedinja will steal your soul if you gaze into that cavity.

Everything about Shedinja as a concept is fantastic. This is almost exactly the point at which Pokemon's creativity really kicked into overdrive, and it seemed like there really was no limit to how outlandish they were willing to go, but whether any pokemon has ever gotten as bizarre and clever as Shedinja is a matter of opinion. If you ask me, Shedinja is a high point for imagination that the franchise has only seldom approached since, but that's not really a complaint about pokemon itself so much as more high praise for Shedinja in particular.

You know a series is something special when it offers more than one entirely different, entirely unrelated option for a dead cicada monster.