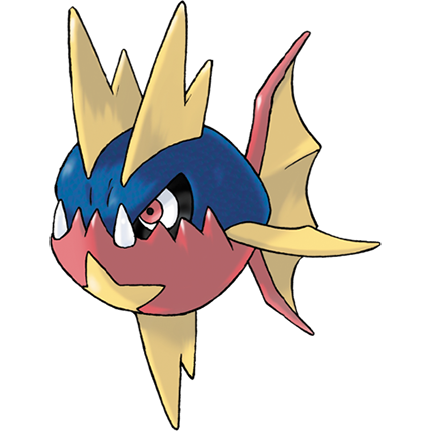 I've always loved the role piranhas occupy in our popular culture, exaggerated though it may be. They never look in cartoons like they do in real life, but you can always tell that's what you're looking at whenever a little cartoon fish has big, scary, jagged chompers. Carvanha captures that perfectly, the spirit of a piranha in an otherwise completely fanciful creature, and it's the game's first-ever water/dark type line! 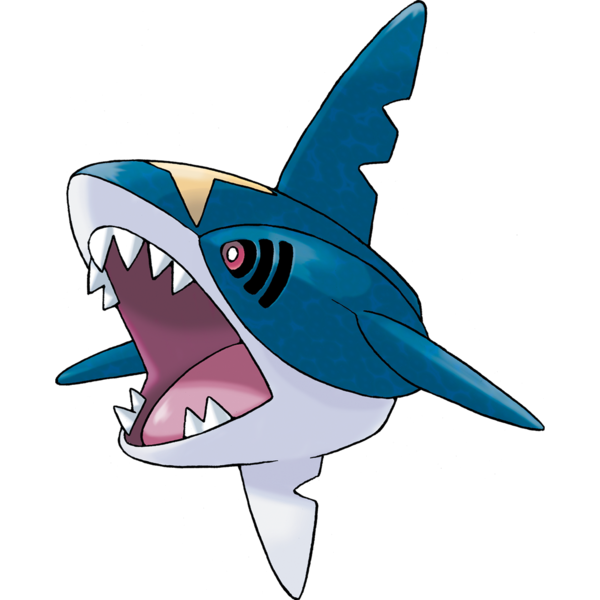 It's a natural fit, by pokemon logic, that a tiny fish with a scary reputation evolve into a much bigger fish with a much scarier reputation, exaggerated though it also may be. The fact that the sharks of the pokemon world all begin their lives as the piranhas of the pokemon world also presents a really interesting life cycle, since the dex confirms that Carvanha lives in freshwater jungle rivers. This would imply that all sharks in this universe must return to these rivers to spawn, like sea lampreys, Japanese eels, salmon and many other real-world aquatic animals. Are there enough rivers in this setting to sustain the entire planet's sharks, though?

There's not really that much to Sharpedo's design. It's a shark crossed with a torpedo, but the two already look so similar that there wasn't a whole lot for them to do but cut the animal's tail off. The way the eyes are kind of inside the gills is cool, though, and it lifts a shark directly enough that you can't really complain. If you do want a weirder, more elaborate shark pokemon, the next gen has you covered. 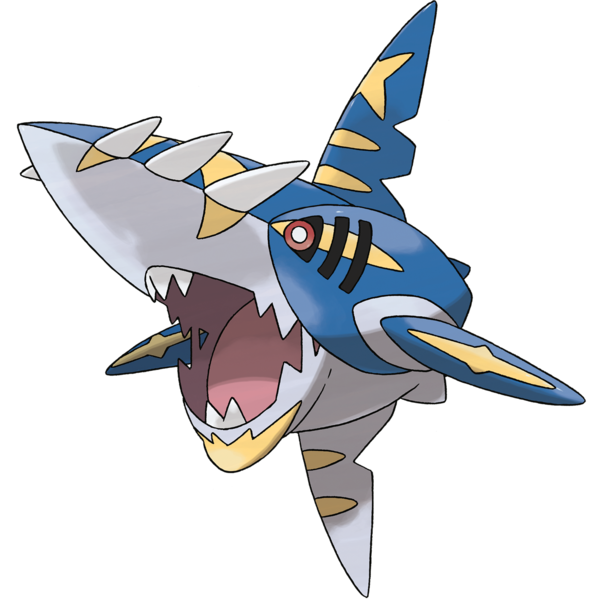 Sharpedo also mega evolves, and at first, I thought this was one of those megas that just gets way too busy to look right. The official artwork certainly makes it look that way, basically just Sharpedo with way too many more of those yellow "scars," a scarier mouth, and sawblades on its snout.

We've already seen the sprite for this thing, however, and in-game, it doesn't really look this busy.

Once I saw (image found here) that those sawblades are retractable, I liked this mega a whole lot more. I still think the yellow markings go overboard (haha, overboard!) but it's otherwise just a slightly larger Sharpedo with switchblades in its face, and that's actually pretty cool. I also like its rear end, which seems able to flare open into four propeller-like blades, though they can't spin, so if that area does anything to propel Sharpedo, it's probably by expelling gas.

Three or fourish out of five. Not outstandingly creative, but the world wanted a shark pokemon and that's what we got, with a cool if predictable typing.