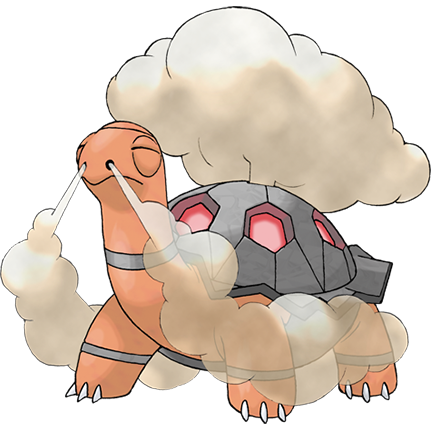 It's sure been a while since we've bumped into one of these forgotten, low-tier, one-stage underdogs, hasn't it? The pure fire-type Torkoal is pretty much the third generation's Qwilfish, a cute idea and a competent design that gets left in the dust by basically every other pokemon. It even comes immediately after Numel and Camerupt in the dex, so you might expect it to be some sort of counterpart line, but the poor thing never evolves and never gets any love.

It's a shame, too, because this is just such a lovely looking little pokemon. The entire design is stylized to look like some sort of ancient, clay oven, with a face very befitting of both a tortoise and a piece of pottery. It feels like it was already conceived with a future evolution in mind, but hasn't received one in three additional generations.

Torkoal might have been another three-point-fiver, but I'm giving it another half ball out of sympathy.