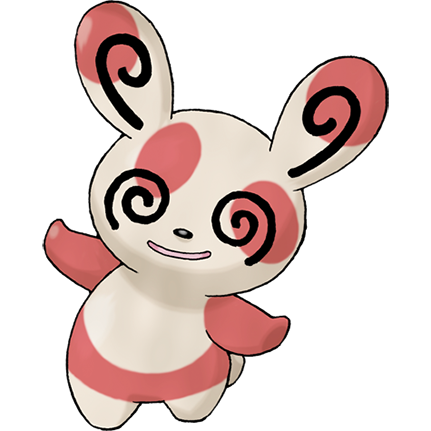 This normal type is another smaller, weaker non-evolver, but remembered much more readily by the fandom than the likes of poor Torkoal or Qwilfish, I guess because it's a cute mammal with an extremely weird face and a few gimmicks up its sleeve. Ostensibly based on a red panda but a little rabbit-like in appearance, Spinda is constantly dizzy and themed around the "confusion" status effect, learning the move teeter dance which confuses all other pokemon present in battle. Its Own Tempo ability makes it immune to confusion itself, while the Tangled Feet ability increases its evasiveness when confused.

Spinda is also one of the few pokemon with fully randomized markings, every individual Spinda bearing algorithmically-placed spots on its face and ears. There are technically billions of possible combinations, but it doesn't amount to much, and it's too bad this is the only pokemon with such a feature.

Very cute, but not much to it. I do love its animations.