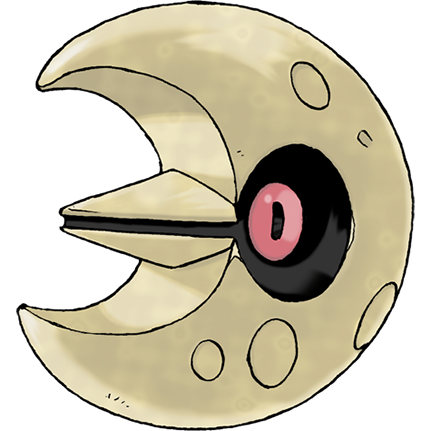 I LOVE these two pokemon. I feel like they don't get near enough appreciation for either their unique concepts or kickass designs. Referred to as the "meteorite pokemon," Lunatone and Solrock are floating, psychic rock creatures that apparently just emerged one day from the site of a meteor strike. That's some regular Colour out of Space weirdness.

Lunatone is my favorite of the two, resembling a cartoonish crescent moon with an expressionless "beak" and eerie, pinkish-red eyes set deep in crater-like sockets. Playing up its nighttime theme, its gaze can either transfix its foes with terror or lull them to sleep, and it learns a selection of ice-type TM moves. Like Cacturne, it's another of the most Halloween-appropriate pokemon that nobody seems to appreciate as such, and I even used it religiously from its first appearance through generation four. 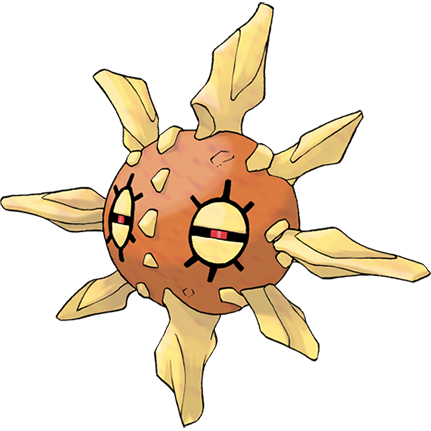 Meanwhile, Solrock is the sun-themed counterpart to Lunatone, and stylistically very different from Lunatone, yet despite its connection to warmth and daylight, it's almost even eerier. Those eyes make me think of some unfeeling, alien robot, and what if that's exactly what these things amount to? What if there's a spacefaring civilization out there whose technology revolves around imbuing stone constructs with sentience and a capacity to self-replicate?

I also love how nice those stony "rays" look, no two precisely alike, each just a pleasantly organic shard of rock. As you may have guessed, Solrock learns fire-type moves wherever Lunatone gets ice attacks, and its eyes emit intense, blinding light as a defense mechanism. (Scans from serebii) Both of these pokemon are just so damn surreal. You can befriend, train, and command a living, telepathic meteorite that looks like a cartoon sun or a cartoon moon. Even after all the toxic sludge mutants and fire-breathing dragons, it's Lunatone and Solrock that really make me think "should humans seriously be messing around with this stuff? Yikes."

I'm sure with all this talk of a sun and moon pokemon, it's hard not to think about how the seventh generation is actually called "Pokemon: Sun and Moon." If Lunatone and Solrock don't get any fresh attention, they'll have REALLY dropped the ball. Maybe megas? Maybe proper evolutions? It might be kind of interesting if a mega form didn't actually change their designs, but just added some sort of creepy, rocky alien body to the meteorites. Just picture Lunatone hovering above a spindly, luminous torso covered in little craters.

I'm a bigger fan of Lunatone's spookiness, but both of the meteorites get an easy five.