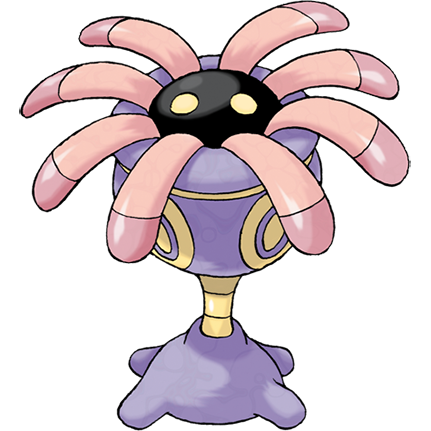 Here's another reason I actually like third gen more than second gen: fossils came back, and the prehistoric organisms they chose to represent this time around are even more interesting than an ammonite and a trilobite. This rock/grass type is based on a sea lily or crinoid, a group of filter-feeding echinoderms (like starfish and sea urchins) still with us today, but vastly more abundant in prehistoric oceans the farther back you look.

Oddly enough however, Lileep's thick, shiny tentacles look significantly more like those of an anemone than a crinoid, and it even feeds more like an anemone to boot, using the tentacles to ensnare passing sea creatures.

What I love most about Lileep are, of course, its eyes. Anything with little glowing eyes in blackness is an easy winner in my book. It's so cute, yet so ghostly. 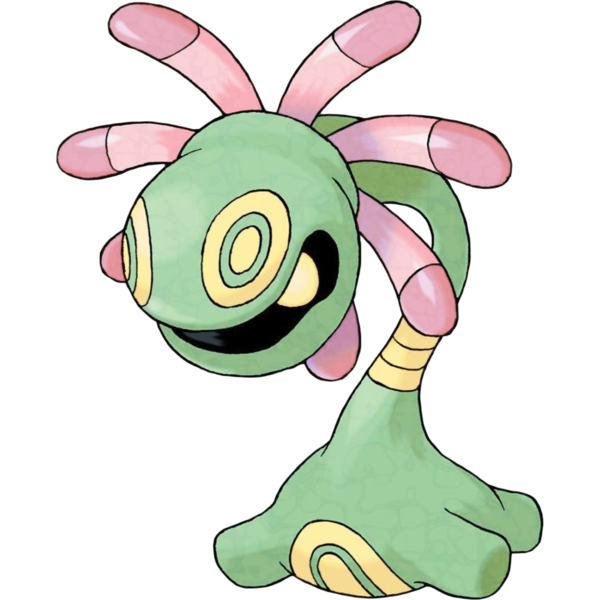 Lileep retains the eye-in-mouth look when it evolves into Cradily, though at first glance, you can almost mistake its eyes for a pair of big teeth, with a set of false eyespots above them. Its tentacles are still anemone-like, and even said to secrete digestive enzymes, while the pokedex bizarrely categorizes this one as a "barnacle" pokemon. Meanwhile, if you take off its tentacles, Cradily is the spitting image of a deep sea predatory tunicate (image courtesy MBARI), so I guess what we have here is a hybrid of various stationary sea creatures, some of which may only be happy little accidents. Additionally, Cradily's base looks just a little like the concrete tetrapods famous along Japan's shorelines.

Unfortunately, there's something about Cradily I just can't quite get into. I like its concept a whole lot, I mean it's basically a crinoid Venus fly trap, but there's still something about the design that doesn't quite do it for me. The differences between it and Lileep are negligible, yet I like Lileep a lot more. Just the slightest change in eye placement can also change the whole personality of a design.

Still, it IS a man-eating-plant sea lily.