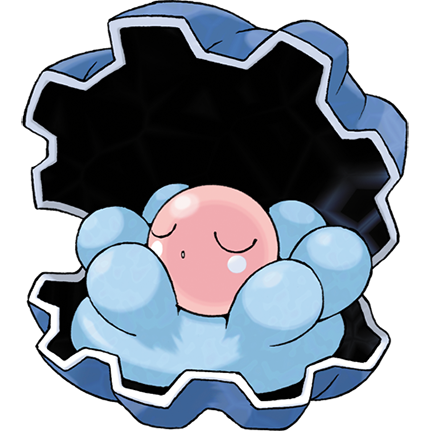 Today, we at last get to review what I've traditionally used as navigational buttons in both my pokemon and deep sea biology writings, naturally one of my favorite lines in the generation. Clamperl is an interesting little bivalve with a very nicely designed shell, not as adorable as Shellder but still fairly charismatic. Its pearl is rather interestingly also its head, which puts a rather morbid new twist on Spoink, though Clamperl is said to shed and replace its pearls on a regular basis.

Clamperl is also found only in the "deep" ocean, thanks to the pokemon move dive, which I really wish was implemented more in later generations. We could have had a whole abyssal realm to explore! 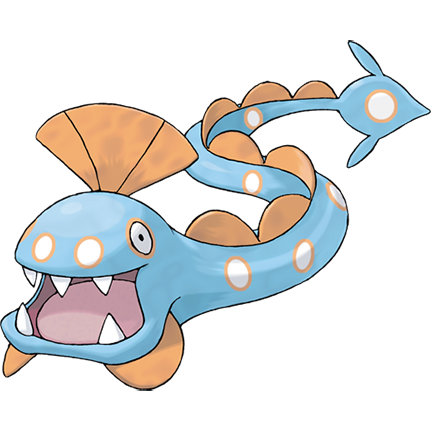 In an ultra bizarre twist, Clamperl evolves from an invertebrate mollusk to one of two possible fish when exposed to either the "deep sea tooth" or "deep sea scale." The tooth will evolve Clamperl into Huntail, and you can see the remnants of its clam shell as the goofy "fin" atop its head.

As a design, I really love this freaky eel. I'm always a sucker for staring, fishy eyes, and they look even better on something with jagged teeth, like the chomps from the Marioverse.
Huntail is also based on one of my favorite animals since childhood, the magnificent "gulper" or "pelican" eels. Granted, the real thing is actually much more outrageous in appearance and it's kind of a shame that pokemon actually toned down those weirdo proportions, but Huntail at least does a better job of looking like a deep-sea fish than Lanturn did.

Huntail also uses its fish-shaped, luminescent tail as a lure, which is something the actual animal does as well! 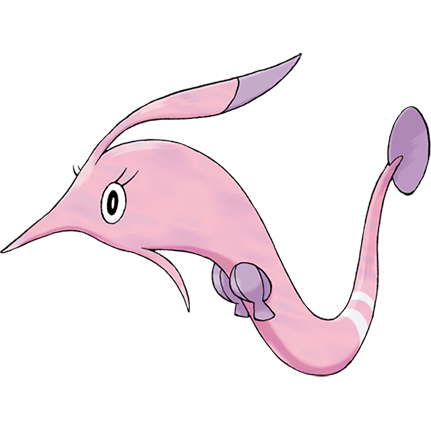 So what happens when you give Clamperl the deep sea scale? You end up with Gorebyss, a strange, pinkish creature with a clamshell bikini top and cutesy eyelashes. Though renowned for its beauty, it's also said to insert its pointed snout into living prey and suck out their insides. Awesome!

...But what IS it? The most common consensus among fans was either a snipe eel (another deep-sea fish), or a pipefish, though I've repeatedly run across comments insisting Gorebyss is a dolphin, of all things. The pipefish is the easiest connection to see of the three, and the snipe eel is a very good guess that shows some research effort, but the truth is a quite different animal from all the above:
Chimaeras, sometimes less romantically called "rat fish," are ancient cartilaginous animals closely related to the sharks and rays, most of which live in the dark depths of the abyss - especially the long nosed chimaera, which is not only the spitting image of Gorebyss, but takes on a more pinkish hue when pulled from the water. Clamperl is an interesting case in which a pokemon evolves into two possible forms and none of the three are related organisms. A chimaera is even more distant from a gulper eel than you are from a tree frog or a kiwi bird, let alone the fact that two vertebrates evolve from a clam. What actually links the three together isn't biology at all, but a simple "deep ocean" theme, and like Remoraid, I can really appreciate a pokemon whose evolutions are "conceptually" rather than physically tied together.

I also just love the heck out of the abyss.

The entire line gets a five, all three of them are perfect.