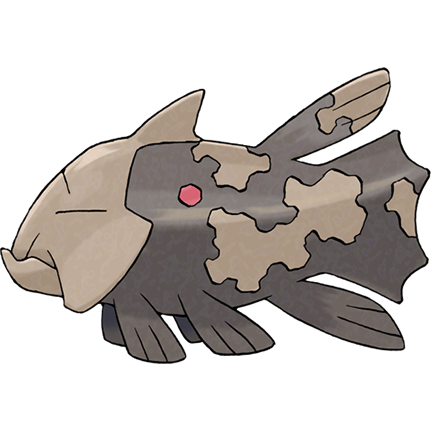 We've got another non-evolver here, but I guess that's kind of the whole point, isn't it? Relicanth is based on the Coelacanth, a fish famously referred to as a "living fossil," not really because it's been "unchanged" for millions of years (a frequently misused concept), but because its entire order was thought to have died out during the Cretaceous period until a living specimen was captured in 1938.

Appropriately, Relicanth is a water/rock type, much like other "prehistoric" pokemon, but you don't need to resurrect one from a fossil; you just need to be lucky enough to catch one of these rare critters wild.

As a pokemon design, Relicanth is very nice. As simplified as it may be, I'm pretty sure I'd recognize it as a stylized Coelacanth without being told, and I love how the closed eyes, jowly gills and jagged underbite give it an elderly appearance. I'm just not sure what that single, red spot on its side is supposed to be, though I guess it adds a nice splash of color where it might otherwise feel a bit empty.

A great choice for a basis, and excellently designed!