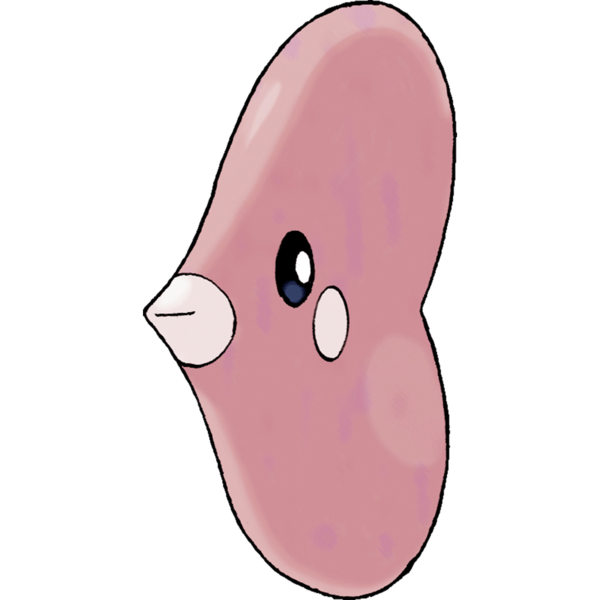 To call today's pokemon "hated" is something of an overstatement, but public consensus does not seem to hold Luvdisc in a very favorable light. It's been called the most "pointless" and "useless" of all pokemon, as well as one of the "laziest" designs of all time. It is, after all, little more than a pink heart with dot-eyes on it, and it's a single-stage water type - already the most common pokemon type - with incredibly low stats.

...But is that really such a crime?

There are other pokemon, like Qwilfish and Kecleon, that seem to want to be competitive battle-monsters and beg to be granted an evolved form. Luvdisc is arguably one of them, but even if it never, ever evolves, I don't think I can fault it. It really does seem like it only exists to be cute and inoffensive, just another little fishy to populate pokemon's oceans, and I don't think there's anything inherently wrong with that.

Luvdisc also kind of excels in the non-violent "beauty contests" introduced this generation, and definitely seems to be geared more for those than for regular combat, which is also fine, but it's a shame the contests were phased out from the fourth generation onwards. Ultimately, there's only two real "complaints" I have in regards to this pokemon:

First, a pokemon called Alomomola showed up about two generations later, and absolutely everything about it SCREAMS "Luvdisc evolution"...but the two are entirely unrelated. In fact, even where it would make all the sense in the world, no pokemon from the fifth and sixth generations would have any evolutionary connection to any previous pokemon, with the exception of a single new Eevee form.

But, you know, maybe that's kind of okay too. Maybe there's room in the Pokemon world for two totally unconnected, pink, heart-shaped fish. Maybe they're related species without being evolutions. Why not?

My only other real complaint? Calling a heart shaped fish "love disk" is one of the most awkward names in Pokemon. It's a funny kind of awkward, but a more obvious play on "discus" was staring them right in the face: KISSCUS!

Just because something isn't exceptional doesn't always mean it's not worthwhile.