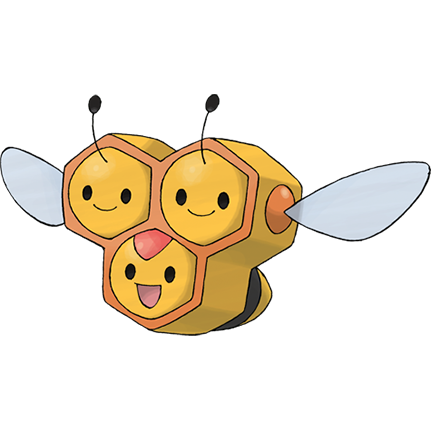 In a nice throwback to Butterfree and Beedrill, the Burmy line shares its habitat with only our second-ever Hymenopteran pokemon, Combee, and what an absolutely precious critter. You've got three bees that also look like drops of honey and also fly around joined in one chunk of honeycomb, apparently building their own hive from their happy little hexagonal bodies. I love how there's just one free wing and one antenna per uppermost bee, the combination of them forming one complete insect-creature. 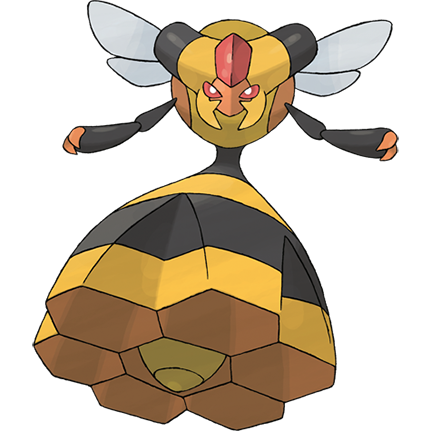 And just like the Burmy line, Combee evolves according to its gender. If your Combee is entirely male, it just doesn't evolve. The males are the drones, of course! If it's female, on the other hand - indicated by that red mark on the lower bee - it evolves into Vespiquen, a queen bee that also borrows from paper wasps with a "dress" that also functions as an entire nest. That's just plain awesome, and she even has three totally exclusive moves: Attack Order, Defend Order, and Heal Order, representing the swarms of Combee she apparently keeps in that dress-nest.

Vespiquen's also got a fairly cool head, with vicious mandibles that also look like part of her big, queenly "hairdo." It's just too bad that, like Wormadam, her stats are pretty poor, and she's even outclassed by Beedrill thanks to its mega form.

An impossibly cute trio of bees evolve into an impossibly badass mother wasp, what's not to love?