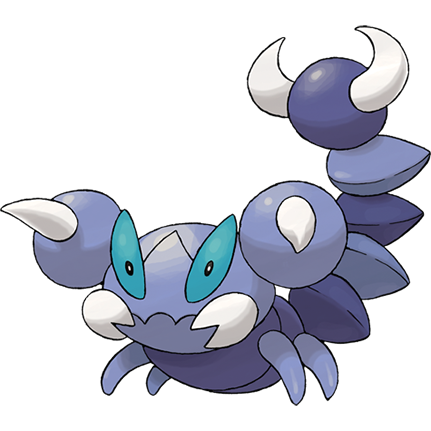 A pure scorpion pokemon sure seemed overdue, didn't it? And considering this generation also gives Gligar an evolution, Diamond and Pearl were by far the scorpingest pokemon games of all time.

So, Skorupi is a rather obvious bug/poison combination, but it's pretty cute. I love those vertical eyes, more like a crab's eyes than a scorpion's. It's also interesting how it has two stingers where its pincers should be, and a pincer where its tail stinger should be. 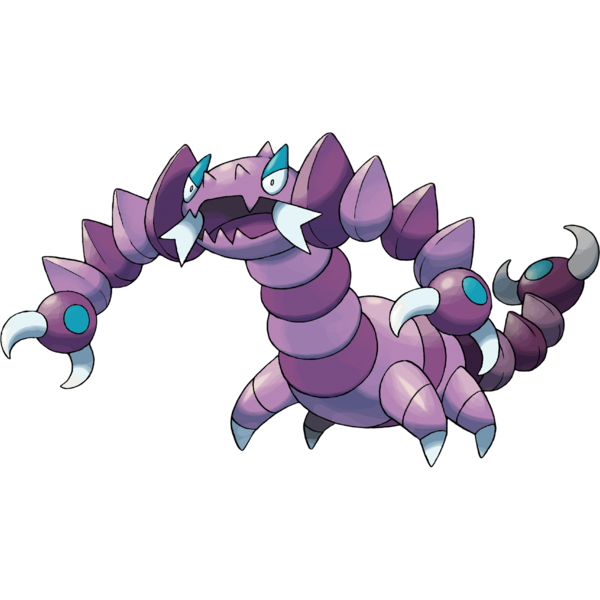 Skorupi's evolution, Drapion, interestingly drops bug type in favor of dark type, making it the second dark/poison combination in this generation. It loses the interesting stinger-claw gimmick, but retains the tail claw, and it puts the head on the end of an elongated neck, which is a really interesting look for a scorpion.

Drapion has a lot of that the chunky, plastic, artificial look that brings down many pokemon designs, but I really like what they did with that here, the alternating shades of purple really giving it the look and feel of some demented children's toy, or a cross between a scorpion and the sandworms from Beetlejuice. I love the accordian-like look of its segments - even if they tragically don't function that way - and I love the simple, spiky pac-man ball that is its face, with curiously forked "tusks" protruding from its mouth. They certainly can't be mandibles, since Arachnids don't have those.

Funny enough though, the most common complaint I've seen leveled at Drapion are that its "arms" are attached to its head, and that it would look better if they were down on its body. Not only do I think this would look incredibly boring, but the "arms" or claws of a scorpion are part of its face. They're an enormous pair of pedipalps, which are a set of manipulatory mouth parts.

A cool poison type, a cool dark type and a cool scorpion.