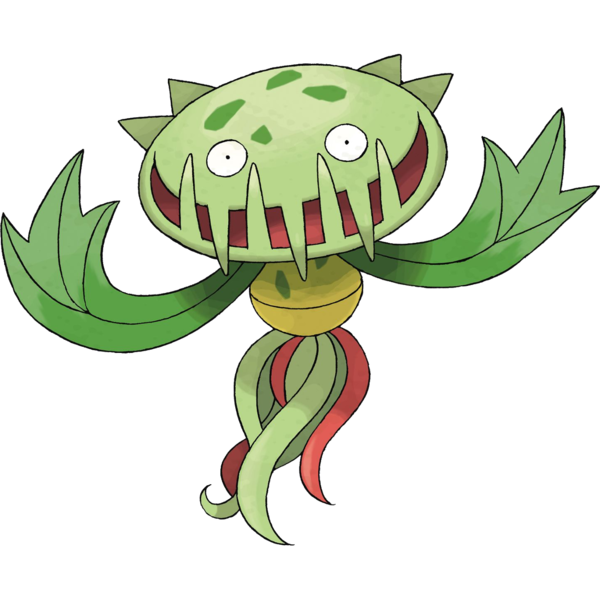 Long, long ago, in my review of Victreebel, I expressed my delight with the fact that the first carnivorous plant pokemon wound up being a pitcher plant, rather than the more obvious Venus Fly Trap...but it's still quite the shocker that it took 455 pokemon to finally see one of the world's most famous of all plants and most common bases for plant monsters. When it first leaked, I even thought it might be an alternate evolution for Victreebel, not unlike Gloom's split into Bellossom a couple generations prior.

At least it was worth the wait, because once Dionea at last saw fit to grace the world of pokemon, it still didn't take the more common, obvious "Audrey II" or "Piranha Plant" design route. You know the one I mean, the iconic "man-eating plant" with a mouth on the end of one big, long stalk. Instead, Carnivine's huge, saucer-shaped head and jaws sprout from a small, round bulb, a pair of leaves act as both arms and "wings," and it trails a a cluster of tentacular roots or vines around like some sort of botanical jellyfish. Most delightful of all are its eyes; the round, fishy kind I love to death on just about every pokemon they adorn. 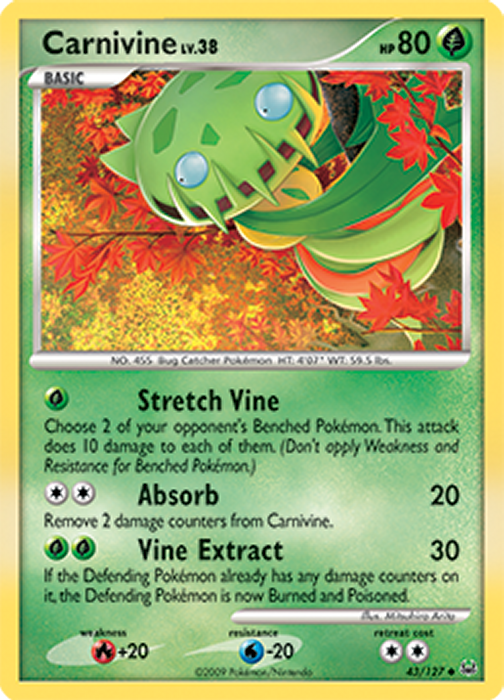 Almost cooler than Carnivine's unconventional design is its unconventional behavior. While every other chomping plant monster attacks from the ground, Carnivine is an arboreal hunter, hanging from treetops to ambush prey from above. This behavior even seems like the real logic behind its levitate ability, since its pokedex entries never, ever mention that it can hover in the air; only that it walks on its tentacles and crawls up tree trunks to lie in ambush. The anime got this right, but in-game animations continue to show Carnivine floating like a balloon. It's an equally interesting concept, but I personally find it cooler that "levitate" was seemingly used to symbolically represent something that simply hangs from treetops. It doesn't make impenetrable sense, but neither does the fact that countless water type pokemon are canonically supposed to be swimming in water wherever they're engaged in battle. 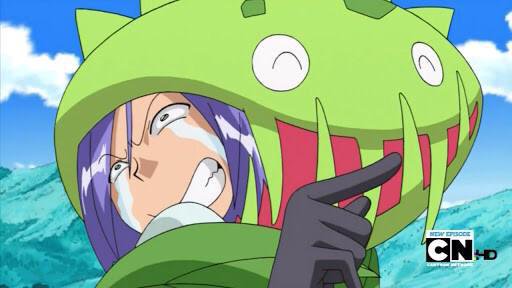 In a loving tribute to good old Victreebel, a Carnivine even spent some time with James, and expressed affection by chewing on his head. The funniest part of this is that Carnivine was supposedly one of James's childhood pokemon, and was attempting to devour him even then. What IS up with James and plant monsters?