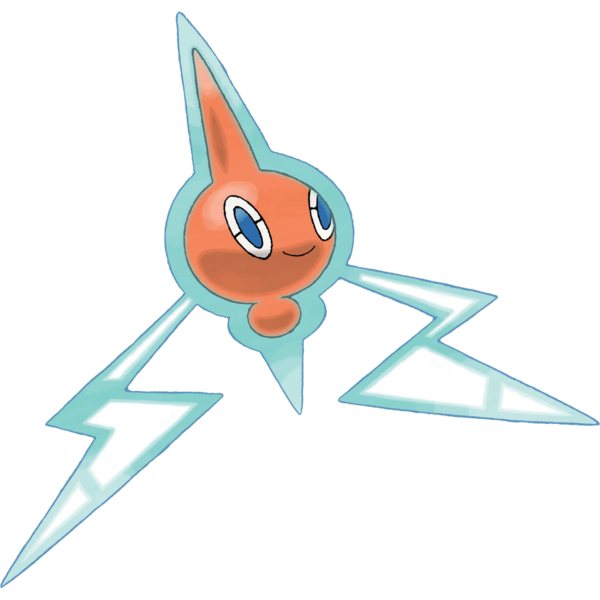 That was quite the leap! We last reviewed Pokemon #460, and here we are at pokemon #479. That's because Diamond and Pearl marathoned new evolutions for existing pokemon, which we've already reviewed on those pokemon's respective pages! We're left with the very last non-legendary in the generation, a unique electric/ghost type found hiding in a creepy old television in a creepy old house. Outside its typing, it seemed like a rather unremarkable one-off for something so late in the dex, all the way up until Pokemon Platinum, revealed Rotom's secret... Though it emerged from a television, Rotom in Platinum could re-enter one of several other electrical devices...and transform completely into one of several other forms. Originally, these forms remained electric/ghost, but in later generations, Rotom's ghost typing would be swapped out for a more thematic element. "Fan" Rotom, for instance, is of course electric/flying, and Rotom's little lightning-bolt "arms" even turn into breezy curls! 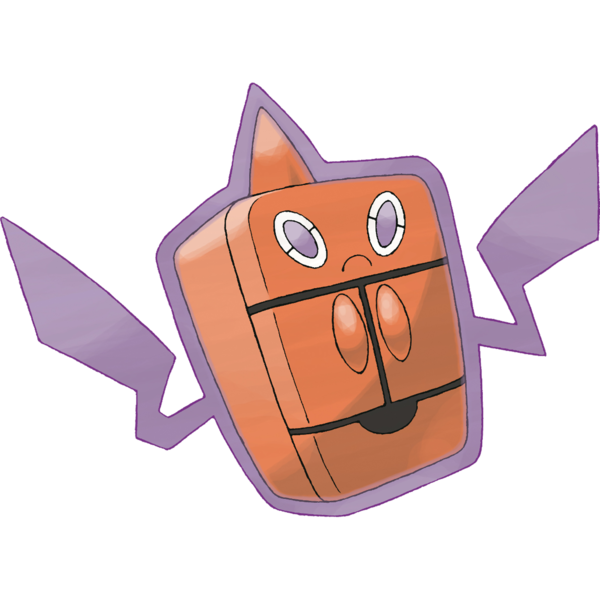 Next up is electric/ice "frost" Rotom, an entire haunted refrigerator. It's actually kind of inconsistent whether these forms represent Rotom in different shapes - still comprised primarily of "plasma" like Rotom classic - or if these are the actual, physical appliances under Rotom's control. Either way, the fact that you can send a REFRIGERATOR into battle is pure delight. 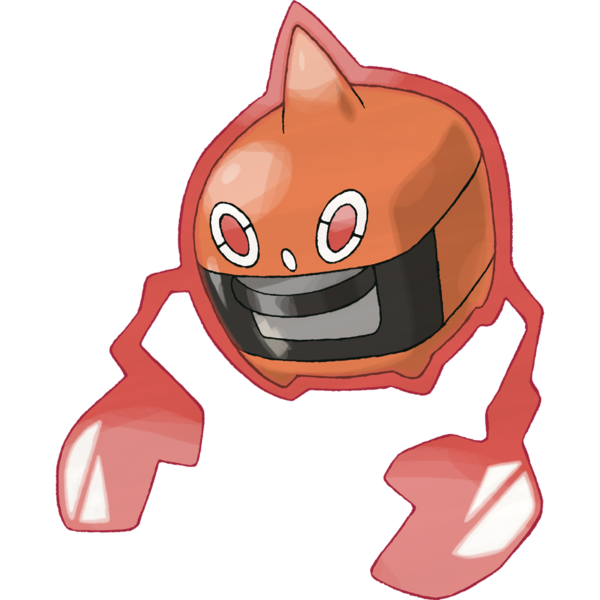 Naturally, there's also an oven-based fire type Rotom, and its appendages now look like oven mitts! I'll take this opportunity to express how much I like Rotom's eyes. Together with the spike on its head and the consistent orange color scheme, it really makes every Rotom form tie into one iconic, recognizable character. 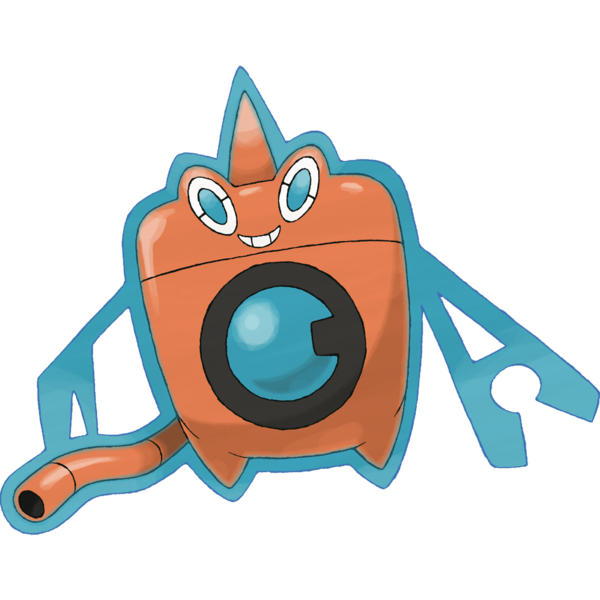 What's almost as funny as a killer Refrigerator? How about a damn washing machine? This is one of the more interesting forms, with its hose tail, window chest and tong appendages. Its typing is also the most competitively viable of all the Rotom. Aren't you glad a washing machine is not only a pokemon, but a pretty good pokemon? 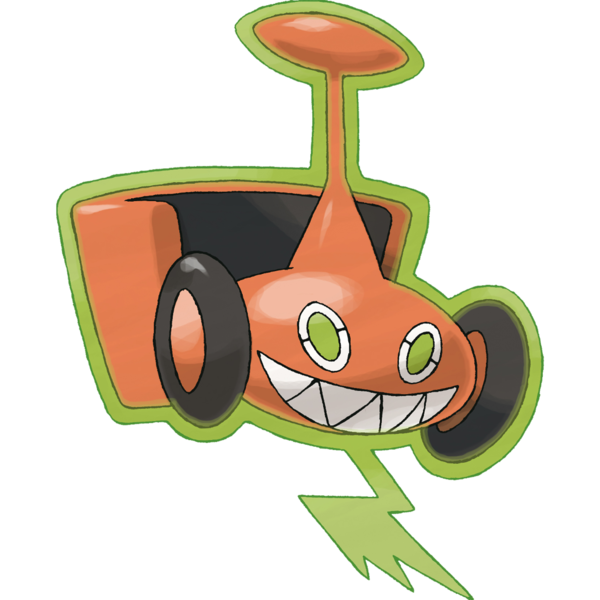 Finally, we have what I think is the cream of the crop, and a pokemon that will also actually cream your crop (I won't apologize). "Mow" Rotom is an electric/grass type LAWNMOWER, and I just cannot get over a lawnmower as a pokemon, sorry. Not when they gave it that lovable Cheshire-Chain-Chomp smile, the only Rotom with such a divergent mouth and easily the most terrifying of the bunch. Sure, the others have various means of burning you, crushing you, freezing you, suffocating you and blowing your important paperwork around the room, but piss off a Mow Rotom and you'll be nothing but an overtime check for a forensic team.

The only question here is how, exactly, Mow Rotom can be grass type. The other four make sense. Those appliances produce wind, water, fire and ice. A lawnmower only cuts things. Plant material is not a natural element of a lawnmower unless it's been thoroughly used and never cleaned out. Is that what's going on? Does Rotom possess not only the lawnmower, but a nasty film of pulverized grass clippings? What if it possesses a new, unused lawnmower? Do you get a pure electric type? These are the IMPORTANT questions, people! 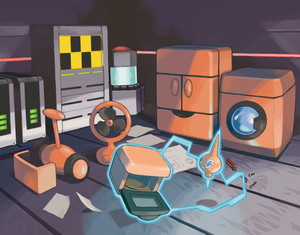 Rotom is one of the oddest and most amusing pokemon in the whole franchise. Plenty of ghost types represent haunted objects, but only Rotom is a pokemon that can haunt different objects at will, and focuses specifically on modern, electrical inventions. It's a pity we haven't gotten as many Rotom forms as Eeveelutions, because there's still penty of potential left. Personally, I've always wanted an electric/poison Rotom taking the form of either a vacuum cleaner or one of those fancy, electronic Japanese toilets. An electric/psychic laptop or even television would also be cool as heck, or why not an exceptionally massive, ground-type electric car? Really, the possibilities are endless, though the upcoming Pokemon Sun and Moon has finally dusted off this pokemon in the most wonderful way... 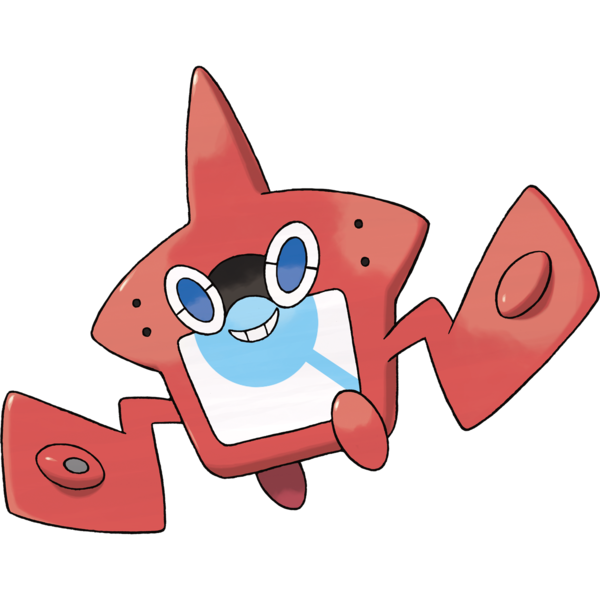 I don't plan on adding new Sun and Moon forms or evolutions to any other pages - we're going to be tackling them one by one after finishing Generation VI - but I'm making a special exception for Rotom, especially since we don't even know if this new form IS going to function as a pokemon in itself. Pokedex Rotom is going to be the player's personal guide through the Alola region, and it's about damn time the Pokedex become a character in its own right. The anime experimented with the idea in its early seasons, referring to the thing as "dexter" and sometimes giving it a snarky attitude all its own, but that never felt completely "canon" and was eventually dropped altogether.

I love the idea of a living, sentient pokedex to accompany us on our journey, and I love that it wound up being Rotom. I'm not sure whether this means we'll get any actual, trainable new Rotom forms, but even with the pokedex alone, I'd be pretty happy.

Awesome and lovable in every way. One of the best things about this generation, easy.