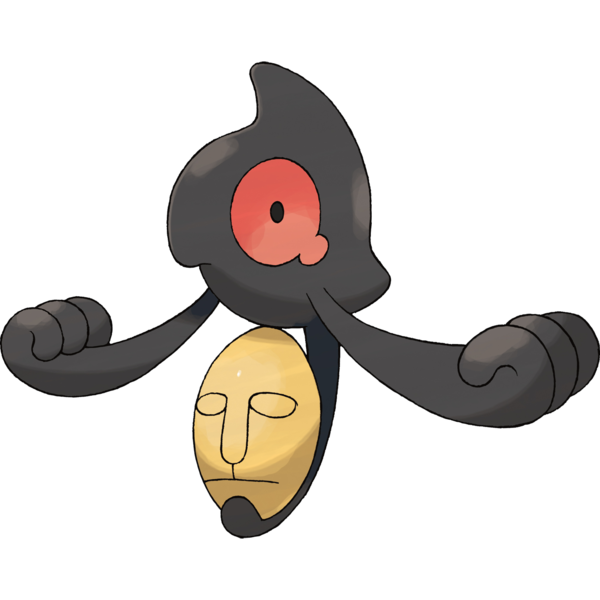 Ghost-type pokemon almost NEVER disappoint, and today's are easily up there with the all-time coolest of the type, if not among the coolest pokemon ever.

It all starts with Yamask, a captivating little shadow-wisp just barely shaped like a human face in profile, with huge, intense red eyes that also sort of look like they're "crying"...or bleeding. This design would already be flawless all on its own, but it also grips an eerie, golden funeral mask in its little tail. What's up with that? Let's ask our old pal, Dexter!

That's right, boils and ghouls, this pokemon used to be a person. And then they died. And then their soul became a pokemon. And it cries about it. We used to debate all the time whether ghost-type pokemon were ever really "ghosts" in the traditional sense, and now we know that at least some of them are. Some of them are people who woke up after thousands of years to be mauled by a big hermit crab and imprisoned as a child's pet. Of course they cry. 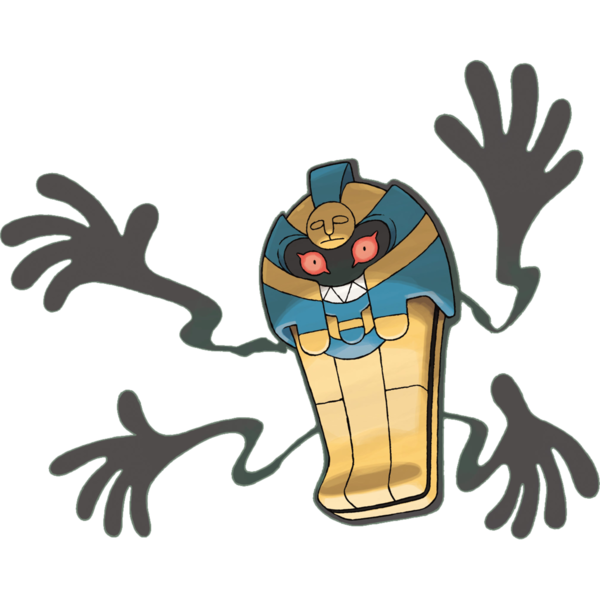 And then - AND THEN!!! - Yamask gets so fed up with people breaking into its burial grounds with their electric zebras and their burning orangutans that it evolves into an entire dazzling, golden sarcophagus that engulfs and mummifies people alive. The pokedex mentions that they "like to eat gold nuggets," but they also swallow human beings (or pokemon) until I guess they starve to death and dessicate, or maybe it drains them of nutrients and fluids to speed the whole process along.

This is all wonderfully punctuated by this monster's unique, signature ability, "mummy," which simply replaces its opponent's ability with "mummy." They can then pass "mummy" on to one of your pokemon, of course, at least unless they switch out, making this the only pokemon ability to work like an infectious pathogen.

Cofagrigus is different enough from Yamask that it's kind of a downer if you were hoping for more of the same from the masked shadow, but there's just no arguing the cool factor of a haunted sarcophagus monster with a twisted grin and multiple, shadowy arms - especially when we get to see it scuttling like a cockroach.

I also really like the subtly organic vibe I get from the sarcophagus itself. There are people who hate when a pokemon looks "man made" and I have seen them include Cofagrigus in that equation, but to me, its body looks very much like a shell that evolves to imitate a sarcophagus. Even Lucario looks more angular, unnatural and man-made than this golden coffin, which could just as easily be a chitinous beetle-like carapace.

The one and only issue with Cofagrigus is the English name, which at one point was even automatically filtered as profanity and therefore impossible to trade or send into battle. Great job, guys. This could have been averted just by moving the "r" one space over; Cofragigus is close enough and still sounds cool. Other alternatives that occur to me include "Cofraghoul," "Mummifrite," "Sarcoffin" and "Endtomb," among others. Anything, really.