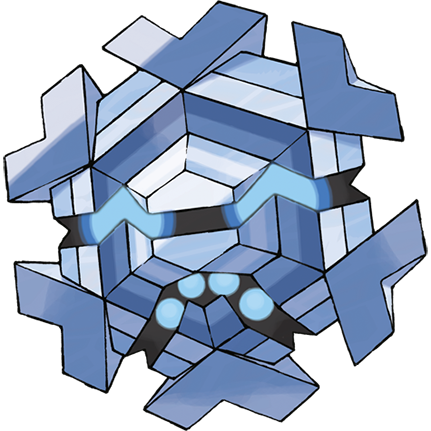 I'm always eager to defend the abstract, non-biological pocket monsters, but even I wasn't sure how to feel about this one when I first saw it. Just a big, massive snowflake with some glowing orbs for "eyes" and..."teeth?" I guess? It looked just enough unlike any other pokemon that I felt more neutral, bordering on positive rather than the immediate adoration I've had for other inanimons. 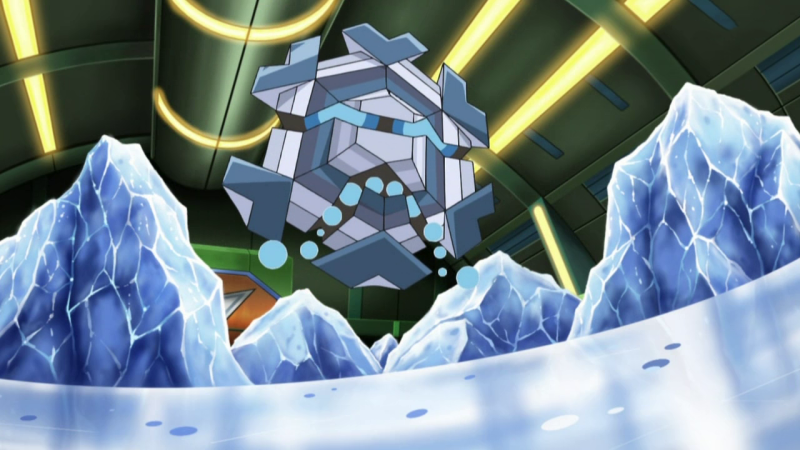 It was a short lived uncertainty, of course. The more I thought about how weird this thing is, the more I appreciated it. This is a floating, crystalline monster made entirely out of sentient, frozen water that forms high up in the atmosphere and constructs its own "ice chains" to capture prey. Yes, according to the dex, this thing is a carnivore. We're also told that if it gets too hot, it converts into steam - not just water - but can re-form good as new when temperatures lower enough.

Everything about this feels like some really out-there concept for a space alien you might find in more imaginative science fiction pulps or post-cthulhu tales of "strange horror." Beings that form themselves from nothing but water molecules, able to maintain themselves only in the cold, hiding themselves in the clouds as they trawl for people and animals to devour.

Even removed from the creepiness of its backstory, it's just plain RAD that you can send a giant flying ice crystal into battle...and that it looks like a boss sprite from an 80's arcade game.

We're handing out fives left and right lately, aren't we?