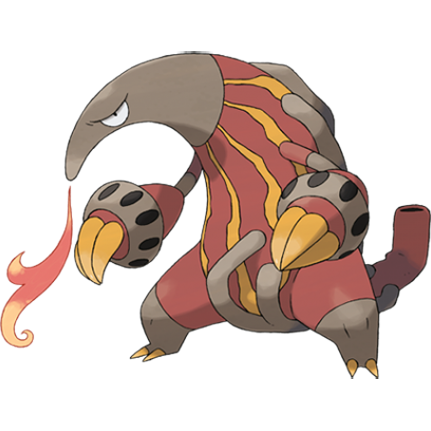 So I don't normally put version counterparts together on the same page, but I feel like I have to make a special exception for these two. Heatmor is a delightfully quirky fire-type anteater pokemon, and I love almost everything about this design. The style and placement of its eyes, the fun proportions to all four of its appendages, the exhaust-pipe tail and especially the organic "ducts" irregularly growing through its body. That's so cool, I wish it were a feature of at least a couple other pokemon. 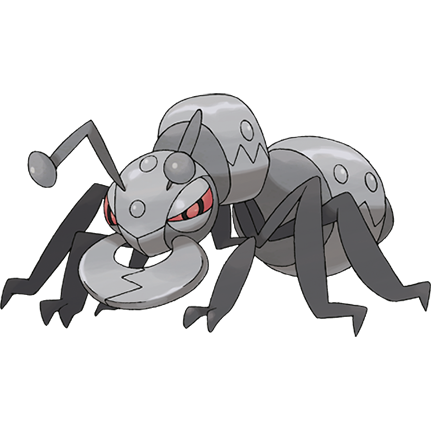 ...Because in the pokemon world, ants are made of metal. Durant is bug/steel, which gives it a quadrupled vulnerability to fire-type attacks. Heatmor's pokedex pulls no punches telling us that it melts through the body wall of poor little Durant and sucks out their innards.

Durant's design is also excellent, one of those rare bug types to actually follow a more or less correct insect body plan, with especially cool looking eyes and even rivet-like nodules in its metallic armor.

The only problem with Durant, and it is admittedly a BIG sticking point for me, is that an ant of all possible animals would be a single, non-evolving pokemon. Where's the queen? The larvae? The maxims? The winged reproductives? Anyone who can count ants among their favorite animals (let alone topping their list) had to feel a little disappointed that nothing about Durant or its role in the game is thematic to a real ant's famous social life.

Instead, Durant exists as little more than a 1:1 counterpart gimmick with its natural predator. What a wasted opportunity.