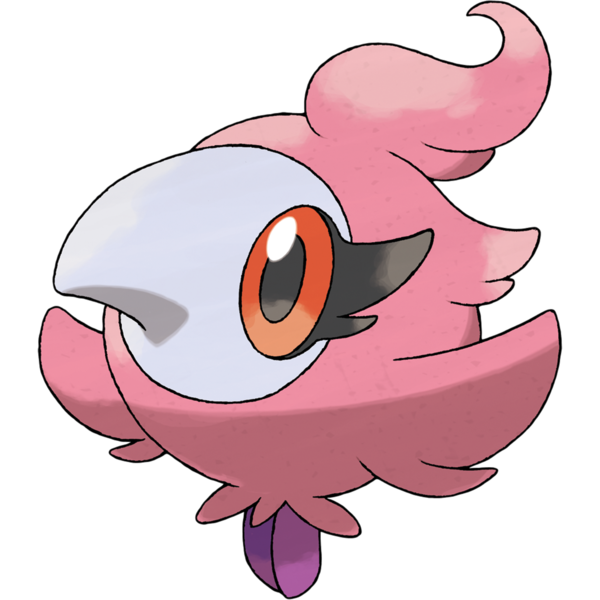 Spritzee was the first of the new fairy pokemon actually revealed to the public, if I recall correctly, and the fandom fell pretty hard in love with it. Why wouldn't they? It's a poofy, pink bird with fabulous lashes and spooky red eyes in what looks a very great deal like a plague doctor's signature, beaky white mask. The fact that Spritzee is "perfume" themed seemed to clinch the reference, since the very purpose of a plague mask was to be stuffed full of sweet, fragrant herbs and oils under the mistaken notion that nice smells could counteract the "miasma" responsible for disease.

Fans eagerly speculated, debated and anticipated how Spritzee might evolve, with most expecting something dark, elegant and ominous. 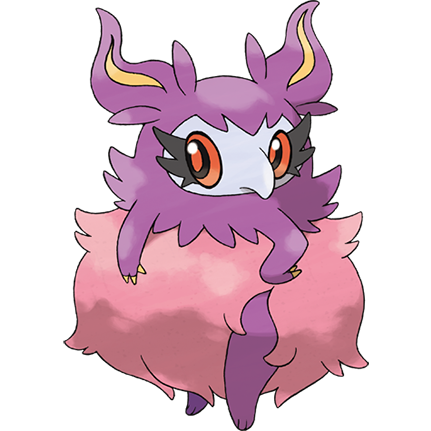 This would turn out wildly incorrect, as Spritzee would instead evolve into a pudgy, fluffy gremlin called "Aromatisse," with more of a "ballroom dancer" motif than some sort of creepy bird doctor. Don't get me wrong, a plague doctor would make a pretty cool basis for a pokemon. I get the appeal. I was the one advocating these things as a Halloween icon a good year or two before they suddenly exploded into mainstream popularity, and can imagine any number of ghost, poison, dark, flying, even bug-type pokemon counterparts (a giant flea with a pale, beaky proboscis, for instance) ...But I, for one, am glad Spritzee didn't go down such an expected route. It doesn't even retain any of its avian aspects when it evolves, dropping the feathery wings in favor of clawed arms and sprouting a pair of wavy, mammalian ears. All it keeps is pretty much its face, its best feature anyway.

Wasn't I JUST singing the praises of "monster" pokemon with no obvious animal basis? This is just the sort of thing I hoped we would get from the fairy type: a goblin. A troll. A bugbear. A whimsical, colorful, fantastical monster with just the slightest dash of creepiness that could have stepped out of Jim Henson's Creature Shop back in the 1980's.

And yeah, I've even used this fluffy, pink boggart on my actual teams for pure aesthetic.