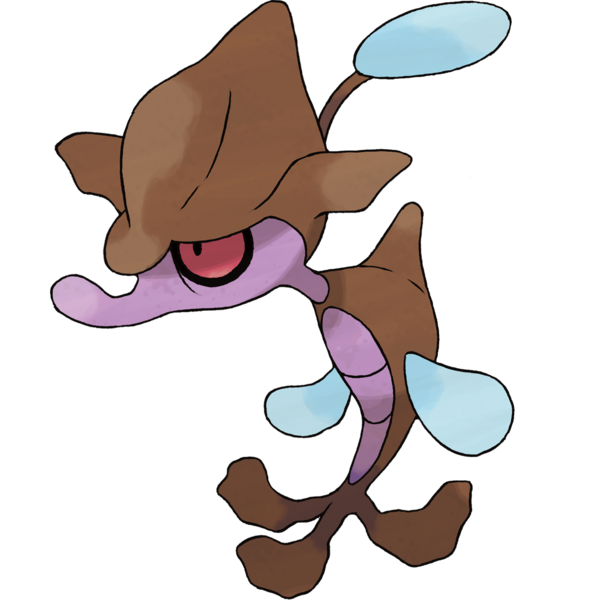 They're spoiling us with these sea creatures, aren't they? I've always positively adored the bizarre anatomy of seahorses and sea dragons, but in popular culture, they tend to get saddled with the same saccharine roles as doe-eyed aquatic ponies or regal mer-stallions, all despite the fact that they're always carnivorous.

As usual, it's up to Pokemon to save the day. Kingdra was already pretty badass for a hippocampus, and now here comes Skrelp, whose almost sickly design, noxious color scheme, melancholy red eyes and water/poison typing are all so perfect that I'm almost as in love with this little dweeb as I am Gloom or Trubbish.

I even love the way its proboscis looks like a goofy, upturned elf nose.

Just like its real-world inspiration, this creepazoid uses its resemblance to seaweed to ambush its prey, though the Pokemon version specifies a resemblance to rotten seaweed, and finishes off its unwary victims with a spray of toxic sludge! It's a concept and final design so perfect, I once again must rate an unevolved pokemon on its own merits first:

My perfect, flawless antisocial child with terrible hygiene who is also a seahorse. 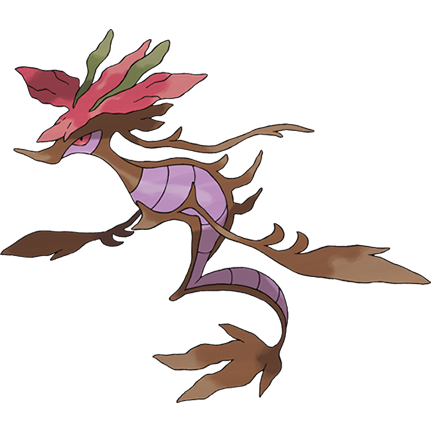 So, after all that gushing, you probably expected me to be a little let down by Dragalge, and I am, though at least not terribly so. Certainly not to the extent of Lanturn.

Yes, Dragalge does lose a lot of Skrelp's special, skeevy charm, and pretty much goes the full-blown "elegant badass" route I'm usually indifferent towards...but it's not as if a whole lot of those are ever poison type, and in an even bigger twist, Dragalge actually drops its water typing to become our first-ever poison/DRAGON pokemon. That this honor would go to a "seahorse" is the kind of surprise angle that's always been a hallmark of this series, and a hallmark I think Gamefreak has only utilized better and better with every generation. 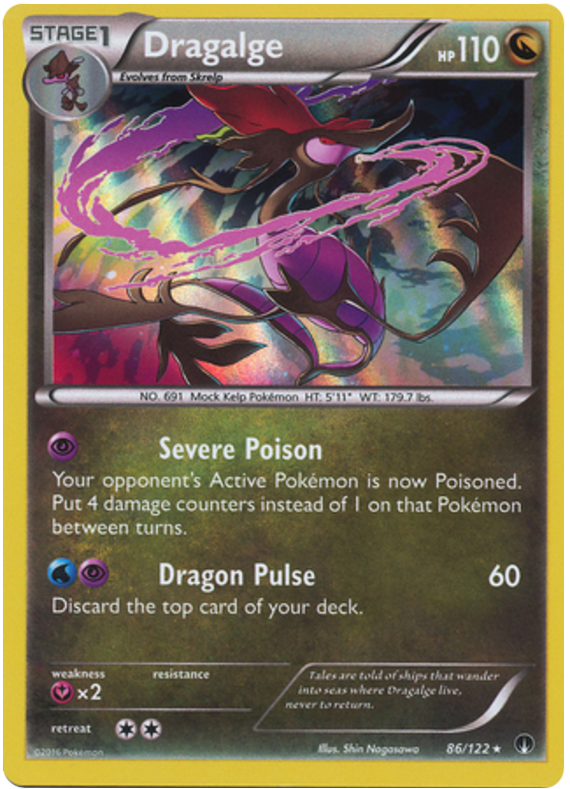 Heck, in the right lighting, Dragalge's beakier snoot and mean red eyes are almost, almost as cool as Skrelp's melancholy mug, and the poison type really was overdue for something pink and frilly.

Relishing the edgy reputation of both its elemental types, Dragalge is said to secrete a corrosive poison that can "eat through the hull of a tanker," and is widely feared for its habit of sinking ships - not unlike Jellicent and Gyarados. This is also likely in reference to the real-world Sargasso Sea, an oceanic region where buoyant sargassum weed really can amass in almost hazardous concentrations, capable of gunking up a boat's propeller and, allegedly, spelling doom for more than a few seamen in past centuries.

Still gets a five...but I'm still just so enamored with the first stage. What a difference the face can make.