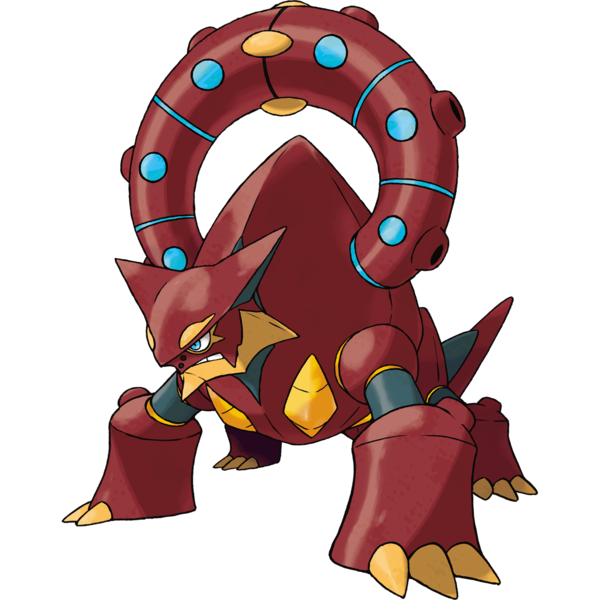 Our very, very final sixth-generation pokemon feels like an odd one to end on. Volcanion isn't especially epic, symbolic, cute or strange or frightening as far as legendaries go. I'd have expected a design like this to come a bit before the likes of Xerneas and Yvetal, if it even had to be a legendary at all. Throw in a prevolution, and Volcanion would have fit in just fine among such regular monsters as Avalugg.

What Volcanion does have going for it is its type combination, fire/water, representing volcanic steam. Unfortunately, it's a combination that feels kind of wasted on a nondescript, quadrupedal beast. I know it's basically an elemental steam beast, and that's interesting, but I'd have expected fire/water to represent something even weirder than that. Some of my own ideas for the combo have included a kappa that specializes in sulfuric springs, a dragon-like multi-headed hydrothermal tube worm and a mechanical-looking "steam powered" diving beetle. Every time a wild new typing is shunted off to a legendary, it feels like they really just didn't have a better idea at the time.

On its own, I guess Volcanion is still reasonably fun. There's plenty of merit to generic, elemental monster-things even if they aren't all that groundbreaking, but I still feel like its placement in the pokedex is arbitrary. It seems a shame to send off an entire generation on such a mediocre note, but that's what we've done more often than not. Legendary pokemon are just sort of there, you know?

Just sort of there.