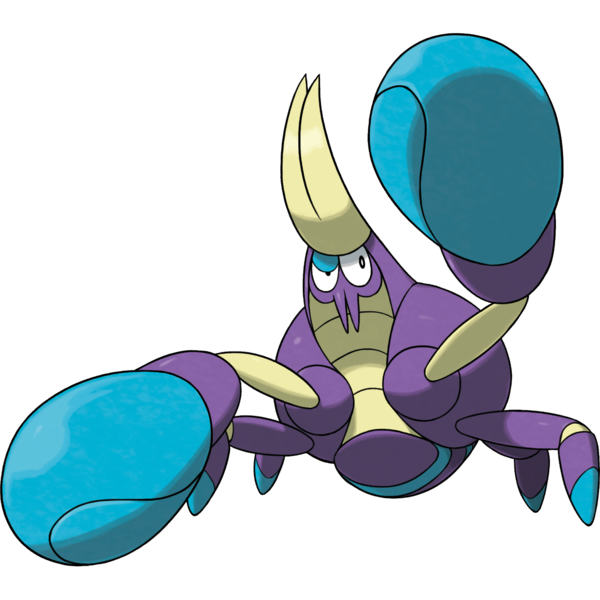 Our next pokemon line is a major mixed bag, but certainly an interesting one. This pure fighting type is clearly based on a "coconut" or "robber" crab, and the design does great justice to its source. Just look at all those beautiful, crabby details! Even better is the unique personality they've given this curmudgeony crustacean, with a perpetual "black eye" from one too many boxing matches and antennae shaped like a hilariously exaggerated bouffant.

This one's lovely pokedex entries let us know that it often loses its arms in fights, but it's okay because they grow back and the arms are delicious.

With a cool real-world basis, attractive color scheme, cool design and delightful amount of character, Crabrawler was an immediate hit with fans and already earns a perfect 5/5 rating. 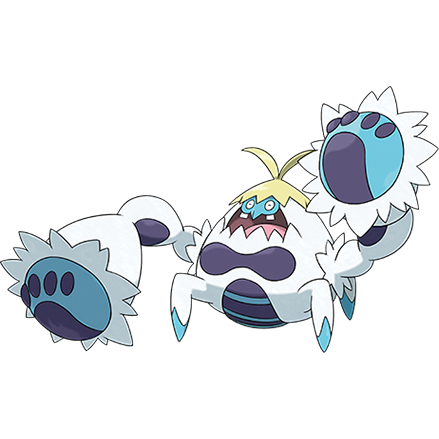 Crabrawler's stats are, unfortunately, quite low on their own, and the poor thing doesn't evolve until brought to an icy mountaintop, again at the end of the main game, at which point it evolves into Crabominable here, a fighting/ice type, which is...well, unexpected, at least.
The basis for this shaggy snow-crab should be obvious to all marine biology nerds - the "yeti crab" known from deep-sea hydrothermal vents, making this a welcome addition to our small selection of "abyssal" themed pokemon. It's an animal already begging to inspire a pokemon, and I'm glad it did, but...did it have to be like this? 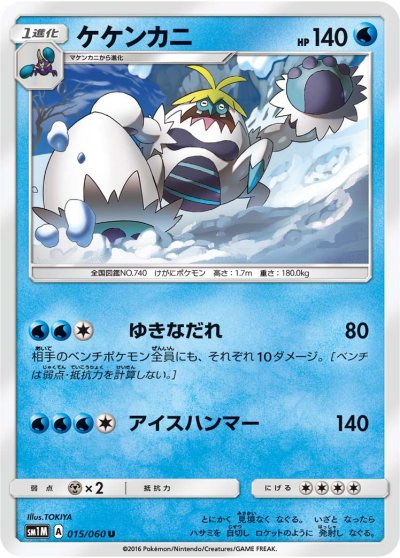 I like Crabominable, sure. Its bug-gorilla design is plenty entertaining enough...but it's so far removed from Crabrawler that it just feels like they happened to have these two different concepts lying around that both happened to be crabs and just sort of slapped them together. Everything fun and special about Crabrawler is lost in an evolution with such a different theme and personality, and the two would have been better off as non-evolving version counterparts, or something.

...And considering where Yeti Crabs actually come from, this would have made more sense as a surprise fire/water or fire/ice type, wouldn't it?

I'll still give it a five because LITERAL YETI CRAB, but come on. Don't do this to Crabrawler!