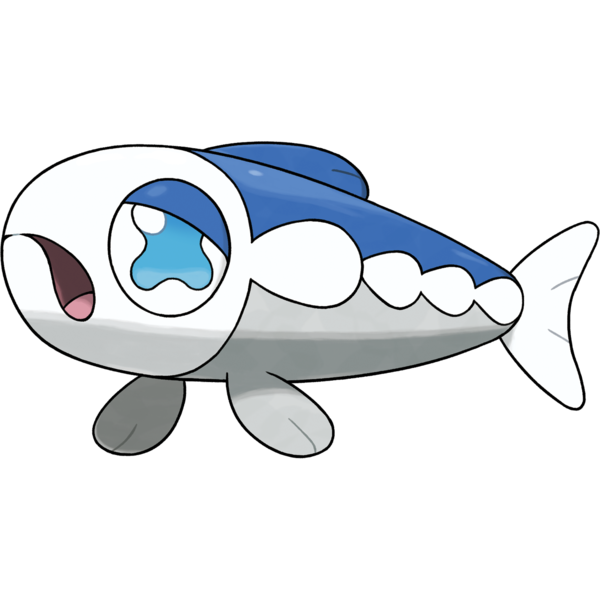 Every Pokemon generation has its common, pure-water pisciform, and I previously nominated Feebas as my favorite of these, but the sheer silliness of this little sardine instantly captured my heart. The tiny size, ridiculous frown, perpetually tearful-looking eyes and adorable name are all just too perfect a combination, and it's about damn time we had a tiny, schooling fish pokemon. What else are Wailord going to eat when there's still no krill?!

As we've repeatedly learned from this franchise, however, the pitifulness of a given fish is proportionate to its potential capacity to kick your ass. 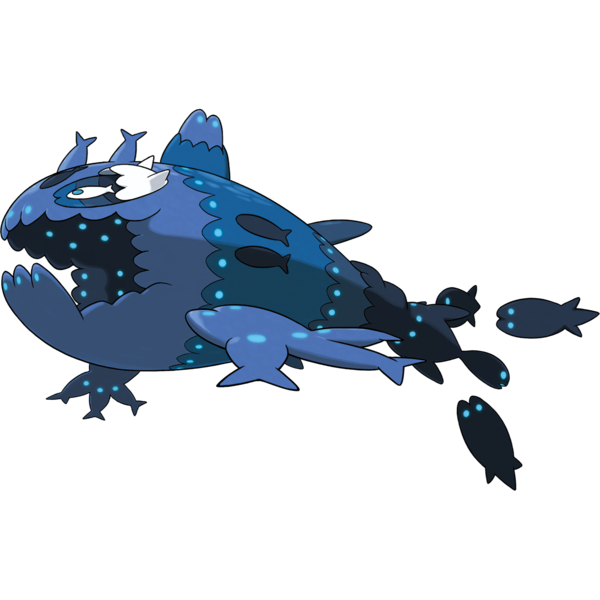 In Wishiwashi's case, asskickery comes not in an evolution, but in a wonderful change of form. This change is activated by Wishiwashi's signature "schooling" ability only after level 20, so it does work kind of like an evolution, but it only represents a school of several hundred ordinary, unevolved Wishiwashi acting together as a single massive body. I've always wanted a sort of "swarm" pokemon like this, but I never would have expected it to be a school of fish! I guess Finding Nemo's popularity in Japan really rubbed off on Gamefreak.

"School form" Wishiwashi is a pretty killer design, too, communicating the fact that it's made out of smaller creatures without the need to draw or render every one of them individually. The glowing eyes are my favorite touch, making all those silly Wishiwashi into something surprisingly ominous. The pokedex even says that their shining eyes are what attract them to one another...when a single Wishiwashi basically starts crying. NO!!!

Unfortunately, Wishiwashi's friends are a bit flaky, because if the school's health drops to a quarter or less, its impressive stats plummet and it returns to the form of just a single, delicious anchovy.

And make no mistake: anchovies ARE delicious. If you don't think they're delicious, you're not eating them right.