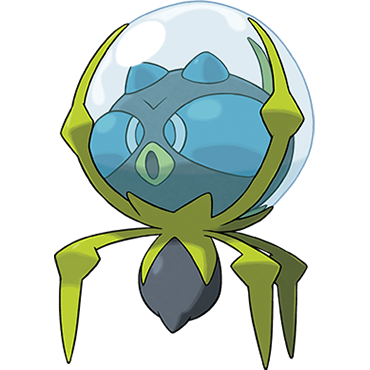 After the cute but relatively lighter moment that was an extra dirty horse, we're in for another continuous chain of outright amazing designs and concepts, beginning with the wonderful DEWPIDER! It's exciting enough to get another spider pokemon, but even more exciting to get another bug/water pokemon, one of the most obvious and most frequently requested type combinations since the fake-out that was Surskit.

Whatever the concept behind it, Dewpider also offers a generally cool, quirky and unique design, with three of its legs holding a bubble of water around a face that isn't really at all spider-like, but uniquely endearing regardless. I love that little beak-like mouth, and the fact that the blunt "horns" on top seem to be a second pair of eyes!

It's unfortunate that Dewpider has only six legs, but I guess we're kind of accustomed to that with spider pokemon.
Dewpider is also another of those Pokemon with a highly specific basis I've already rooted for in the past, which is already a predominant trend in a generation we aren't even halfway through! 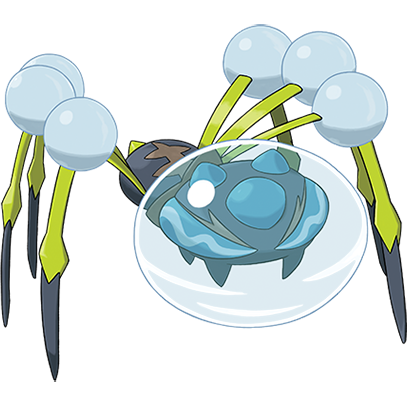 Eventually, Dewpider evolves into the menacing Araquanid, officially the first fully evolved bug/water pokemon in the series and a damn cool design. It actually sort of reverses proper spider anatomy, with legs attached at the abdomen and a much larger head, but the additional eyes are now more obvious, the lower "wrap-around" eyes even cooler looking, and I do like the ring of four opposing fangs slung underneath.

My only complaint now is that I'm not totally feeling the bubbles on its knees. Maybe if they matched the transparency of the helmet I would like them better, but instead they kind of look like weird pearls or styrofoam balls stuck to its legs.

It's also too bad that there's no longer a set of legs holding the cranial bubble together and it lost the tripodial stance that made Dewpider look so unique. If their body plans were essentially reversed, I really would have found them even better and more interesting; Araquanid definitely looks more "normal," while Dewpider looks a more advanced evolutionary course. Still, Araquanid is one cool looking pokemon, and it's not half bad in-game, either. Its bug typing would normally negate the water type's resistance to fire, but its unique "water bubble" ability halves all fire damage and gives it immunity to burn status. At the same time, water bubble doubles the power of its own water-type moves, which were already receiving a 50% boost from its water typing. Its base attack stat isn't great, but as long as it's using a water attack, it can hit pretty hard. 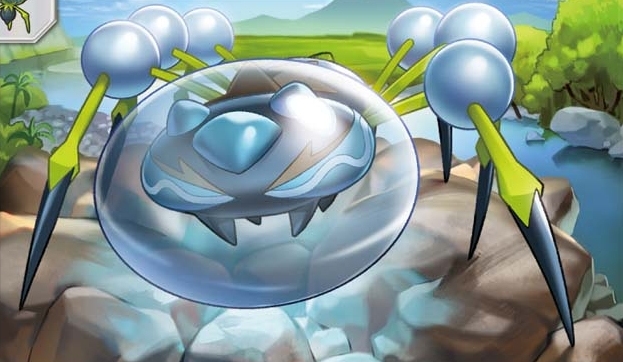 Araquanid's pokedex entries are intriguingly at odds with one another between the two game versions. In Pokemon Moon, we're told that it's a surprisingly kind, caring creature who brings weaker pokemon "protectively" into its water bubble...but in Sun version, we're told that smaller pokemon are sucked into its bubble to drown as it attacks.

Which is it? I guess it depends on the situation. An Araquanid probably feasts on such tiny bug pokemon as Caterpie or Ledyba, but perhaps sick, injured water types like Luvdisc or Barboach tug at its maternal instincts?

...Or maybe it tries to help, ends up drowning things by accident, and figures it may as well enjoy the free meal.