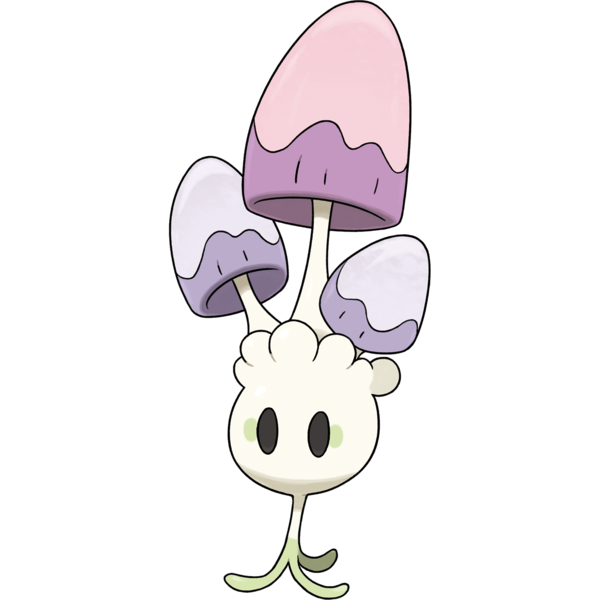 Ever notice that a mushroom-based pokemon line comes precisely once every other generation? Paras in the first, Shroomish in the third, Foongus in the fifth, and now Morelull in the seventh...and while I've loved all of them for different reasons, I have to say Morelull is the best of the bunch as a mushroom. Paras has the best overall concept, yes, but it's as much an insect pokemon as a fungus pokemon, and its mushrooms, taken on their own, are a little mundane. Breloom, meanwhile, is more of a dinosaur-bird-thing than a straightforward toadstool, and Foongus has that pokeball motif that just isn't to everyone's taste.

Morelull, on the other hand, is pure fungus, no bells or whistles, and with by far one of the better designs I've ever seen for a mobile mushroom. Most have a tendency to place a face on either the cap or the stem, even though what we know as a "mushroom" is only the "fruiting body" of the real organism, the mycelial network hidden below ground (or in an old, rotten log...or in the flesh of your itchy feet.) I'm so glad that Morelull's ADORABLE little mouthless face and equally adorable, three-pronged sprig of a body so appropriately begin where its fruiting bodies end!

Cooler still, Morelull is a symbiont that feeds - in moderation - by tapping its "roots" into the trees and plants of its forest, again like the real deal. It produces light, which is common to many actual fungi, and best of all is its grass/fairy typing. Fairies and mushrooms are like peanut butter and jelly!

Unfortunately, you know what it means when I rate an un-evolved pokemon. 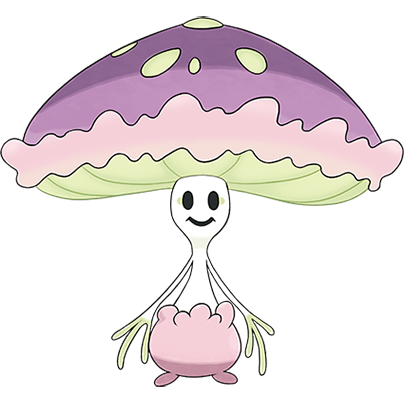 Pokemon, seriously, you have GOT to stop dropping so many of your best characteristics when you evolve. We're not halfway through this generation and we've already watched Crabrawler, Cutiefly, Mudbray, Dewpider and now Morelull lose at least something special through their metamorphoses. Couldn't Morelull have just sprouted a bigger, broader cluster of mushrooms and a more elaborately branching "lower body" of mycelia? That would have looked amazing.

Still, this is no repeat of Lanturn or my dreaded Goodra. This is a bit more along the lines of Trevenant, where an evolved form may be more "generic," but still has its own charm.

Shiinotic's predictable humanoid stem-body is as much blessing as curse. The classic "mushroom man" we've seen in countless other fantasy settings certainly felt missing from our selection of pocket monsters, and I definitely appreciate how much this thing looks like a ghostly space alien. The mushroom cap itself is very nicely designed, I love its overall color scheme, and its boneless arms are especially cool looking. It's also another of those pokemon, like Litwick or Pumpkaboo, who follow in the footsteps of the Will O' Wisp, using their luminescence to confuse those who tread on their territory...and feed upon them once they tire. This is all just so classic to both a fairy and a mushroom creature, I really can't fault it too much for an otherwise unremarkable body plan.

There's another thing here, too; the resemblance to an "alien" isn't accidental! The whole design can be read as a little spaceman emerging from a UFO, which is just delightful! 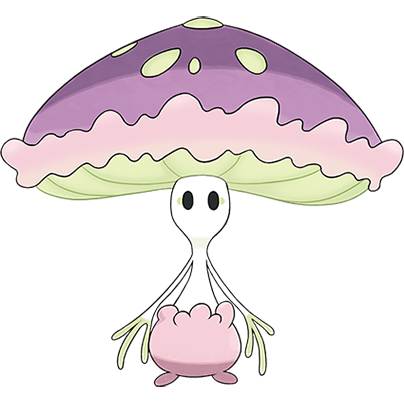 That said, I think I'd still like Shiinotic a tad better if it kept Morelull's mouthlessness.