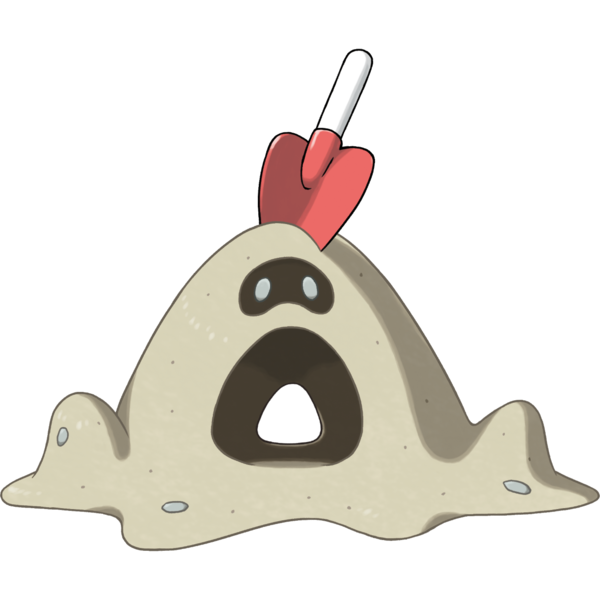 About dang time we get to an inanimate object, if you don't count Comfey, which I don't, because it's entirely a living plant creature. Sandygast, on the other hand, is another clever entry in Pokemon's long line of Tsukumogami, and this time, it's a "sandcastle" that's sprung to life as a malevolent ground/ghost spirit - or at least a sand pile made by a small near-infant, complete with a discarded shovel!

Sandygast's design has that simplistic sort of perfection I love so much in countless first-stage pokemon; you can't go wrong with a living, creeping pile of something, whether it be sludge or trash or soil or sand, and I'm always a fan of eyes set in a single socket. The mouth hole going all the way through Sandygast's body - a "tunnel" built into the "castle" - also adds a lot of novelty to an otherwise straightforward "blob monster" design.

Cute though it may be, Sandygast is a ghost type, and very few ghost types get by without a dash of horror. Said to originate from the grudges of the dead, anyone who reaches into Sandygast's mouth or touches its plastic shovel will fall under its mind control - compelled to keep adding more sand to its body. 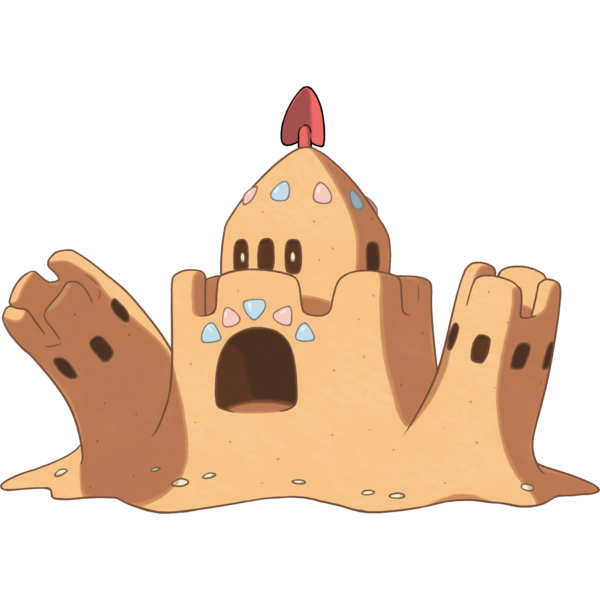 ...And with the aid of those possessed servants, Sandygast eventually builds itself up into a proper castle, Palossand, said to generate a vortex to ensnare living things and drain away their life force, as Ken Sugimori himself saw fit to demonstrate thusly:

My VERY favorite detail, however, is that the shovel sticking out of Palossand's head is constantly rotating, like a little sonar dish, and that is exactly how it functions, apparently picking up the presence of delicious "life energy." I love object monsters enough as it is, but it's all the more fun when practical "biological" uses are found for their nonbiological components.

A welcome addition to Pokemon's many weird and wacky spooks.