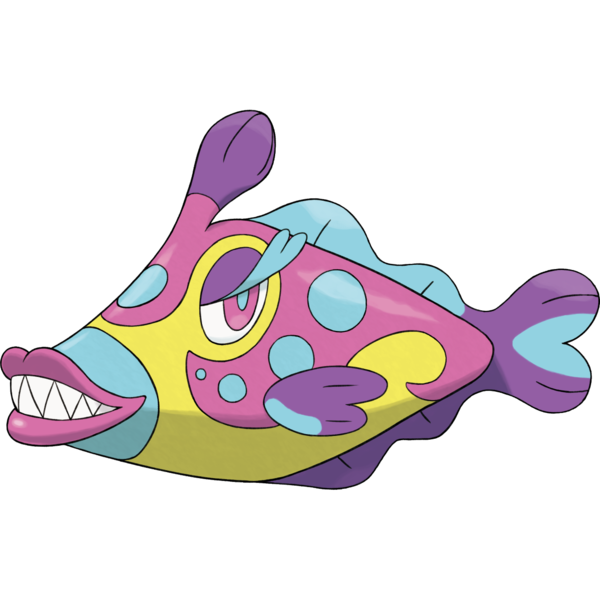 You know I enjoy a good fish Pokemon, and while today's example could have used an evolution or two, I definitely see a lot of charm in this flamboyant water/psychic combo, immediately recognizable as a triggerfish, an animal in the same order as both the pufferfishes and the gigantic mola-mola. 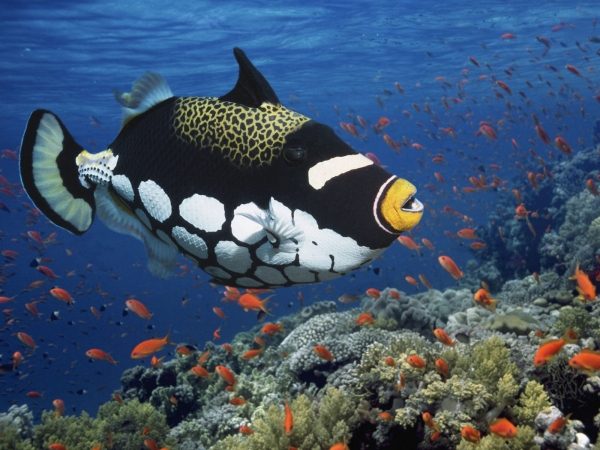 Triggerfish (as well as the closely related "filefishes") are distinguished by almost equine, tapering muzzles housing remarkably powerful jaw muscles, allowing them to bite through the tough shells of mollusks, echinoderms and crustaceans with each. Their namesake, meanwhile, is the thick, sharp "trigger"-like dorsal spine, allowing them to "lock" themselves inside their rocky dens or stab a would-be predator from below. Notoriously ornery, triggerfish tend to bully other fish in close quarters (such as the home aquarium) and easily draw blood from an unsuspecting diver with their formidable bite.

Both major weapons of the triggerfish are creatively incorporated into Bruxish, its "trigger" adapted into a flower-like psychic antenna it can use to induce headaches, confusion and loss of consciousness in its prey. Disturbingly, those exposed to these psychic waves can also hear the maddening sound of the fish's grinding, gnashing teeth, a sound that sends most wild pokemon fleeing.

Bruxish is said to conceal itself in sand with only this antenna exposed, and with its almost lure-like appearance, I was somewhat expecting an evolved form along the lines of an anglerfish - an animal still begging for better representation in this series. Nonetheless, I'm glad that something as specific as a triggerfish received such a thoughtful pokemon interpretation, and it's even one of Alola's more thematically appropriate animals; real-world Hawaii's official state fish is the reef triggerfish, Rhinecanthus rectangulus, known in the Hawaiian language as Humuhumunukunukuapua'a.