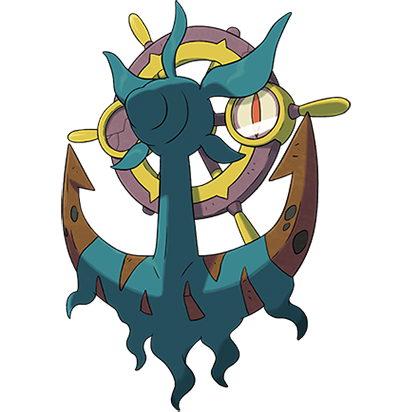 OH MAN this one's cool as SHIT! I had to cuss a bad word it was so cool!!! Dhelmise was among the amazingly few Alolan pokemon not spoiled in the months leading up to the game's release, and I knew from the moment its sprite leaked that it would be one of my new favorites. I mean, just freakin' look at it; it's a rusted, slimy anchor and decrepit ship's helm forming a sinister, floating "face" together. If that's not rad as hell or at least respectably interesting, you probably think the pinnacle of Pokemon's creativity comes in anthropomorphic dog form, don't you?

There's much more to Dhelmise than there first appears, however. I easily guessed it would be a ghost type, but we all kind of assumed it would also be water type or steel type, being part of a shipwreck and all.

Instead, the so-called "Sea Creeper" Pokemon (EVEN ITS TITLE IS AWESOME!) is another ghost/grass type, because the Pokemon itself actually isn't the anchor, but the algae. Specifically dead algae, or "the spirit of seaweed adrift in the ocean," which infests and animates marine wreckage as a defensive weapon. The fact that it uses its anchor rather than being its anchor is actually integrated into its brand new ability, "steelworker," which boosts the power of steel-type moves by 50%. This is the same bonus a steel-type pokemon would enjoy when attacking, but doesn't come with any of the steel type's weaknesses, again because the anchor is something dhelmise "carries" rather than an integrated part of its being.

In addition to a signature ability, Dhelmise is also blessed with a signature move, Anchor Shot, a steel attack which otherwise works exactly like Decidueye's "Spirit Shackle." Learning a number of other useful moves - like the coveted Rapid Spin - the Sea Creeper is arguably even a bit better than the owl starter. 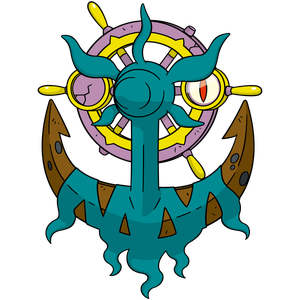 As absolutely killer as this haunted flotsam may be, my single favorite thing about Dhelmise is the simple fact that a Pokemon is finally just a bunch of slime. No anthropomorphism, no actual "face" of its own...just a bunch of green scum that also happens to be a sapient monster. A sapient GHOST monster. A bunch of undead diatoms want to be your friend and they can't wait to wreck a few dinosaurs and fairies with the gigantic hunk of steel scrap they dragged off the sea floor. That is such a bizarre, amazing concept in or out of a Pokemon context.

Didn't William Hope Hodgson write about something like Dhelmise? No? Well he may as well have. He wrote like ten dozen stories about weird things occupying shipwrecks. That's why "Hodgson" is the best possible nickname for a Dhelmise after Kelporeal and Shiverme. The best possible nickname the game will allow you to enter, anyway, because any variation on Sargassum gets flagged as profanity.