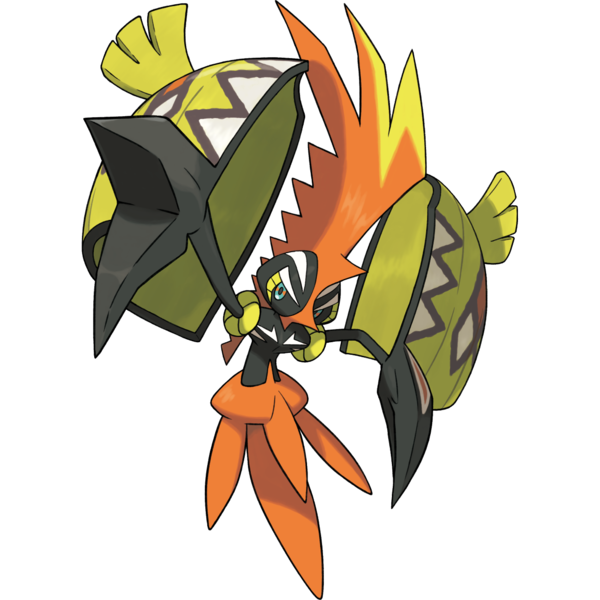 We now hit the Alola region's first legendary Pokemon, a quartet rather than the usual trio, and among the few pokemon to ever receive two-word names, though the word "tapu" is just a distortion of "kapu," which is where "taboo" comes from and still a serious religious term, which is a little awkward.

Some people get on the defensive when this kind of thing is brought up, but I don't think there's any harm in discussing this kind of cross-cultural confusion, and we simply can't review the Tapus without delving into how they relate to their obvious inspirations - the four actual guardian deities in Hawaiian spirituality.

So, each of these four fairy types are distinguished by a wooden "shell" or "mask" evocative of a different animal. In Tapu Koko's case, we have an electric/fairy combo known for its great speed and for being one of Alola's most fearsome defenders, with rooster-like plumage and a bird-like mask. It's pretty interesting how how its pincer-like hands come together to form a beak!

This Tapu seems to match up pretty closely with the god Kū, or Kūka'ilimoku, a god of war commonly represented with red-feathered figures and comb-like headgear.

Funny enough, "koko" can be read as "blood," when what they probably meant was "kokō," the sound of a rooster's cry. As written, "Tapu Koko" apparently looks like "Blood Taboo"...but maybe that was intentional, considering the war aspect.

As a Pokemon, I'll just be giving Koko a four for its unusual and stylish anatomy. 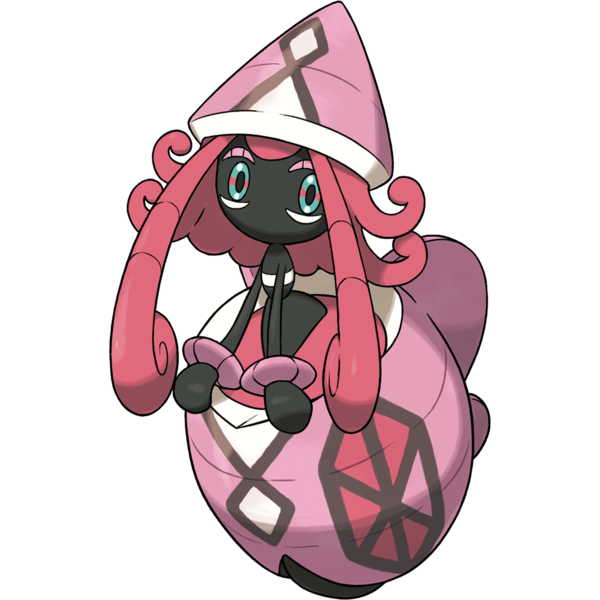 Moving on, I'd say the second Tapu is by far the most interesting to me personally. Tapu Lele, guardian of Akala island, is a psychic/fairy that, at first glance, almost resembles some sort of squid or cuttlefish, though the actual intent is that it resembles the head of a butterfly. When retracted, Lele's "hair" becomes a set of antennae, and she extrudes a black, coiled tail like a butterfly's proboscis.

Lele's claim to fame in-canon are the healing effects of its powdery scales, but Lele is far from the sweet, nurturing figure more typically packaged with healing abilities. It's even described in the pokedex as "guilelessly cruel," and the official website even saw fit to tone down its description in English. Our version says that Lele once used its healing scales to end a bloody war and bring peace to its island, but the original Japanese goes on to say that the battle only ended because "the warriors, empowered by the scales, all fought to their final breath."

This combination of restorative, medicinal powers and sadistic malice is a rare one, and coupled with its butterfly motif, Lele might be one of the game's most interesting and unsettling fairies.

I'm not entirely sure that squid-like appearance is just in my head, either. If Koko aligns with Kū, then Lele would be most similar of all to Kanaloa, associated with magic and the forces of the underworld...but said to most often take the form of a squid or octopus. On the other hand, Lele's restorative magic and resemblance to a flying animal might derive from the god Kāne, associated with the sun and sky and said to have contributed most to the creation of humankind. Either connection feels like a bit of a stretch, but at least Lele is unique? 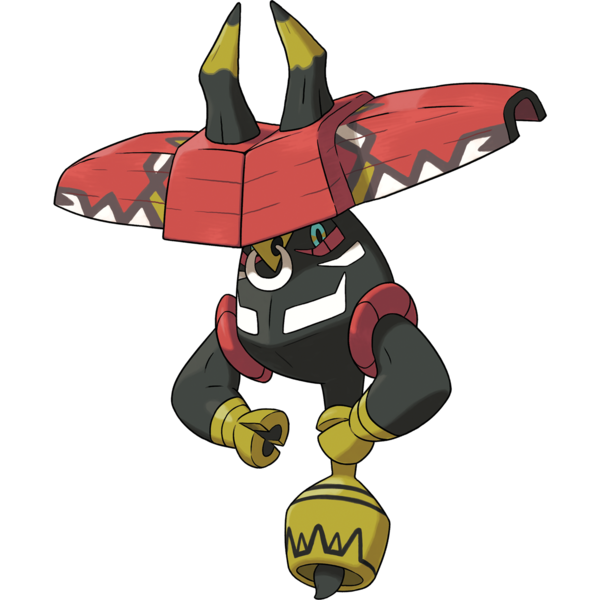 The third Tapu, guardian of Ula'ula island, is a gentler, more easygoing creature than either Lele or Koko, said to abhor violence until truly pushed too far - much like the bull it resembles. When its casing closes, it forms the rough shape of one big cow's head, though in this case, the inner fairy-being sort of already looks enough like its "mask" to feel more redundant.

Bulu is interestingly grass/fairy, I guess because a bull is so associated with grassy meadows. It ends up being one of the only grass types in the game to not actually appear plant-like or fungus-like in any way, though another upcoming Pokemon has it beat!

If Bulu draws from any of the four Hawaiian gods, it would be the god Lono; a deity associated with many forces of nature, but most notably with fertility, rain, agriculture, music and peace. Nothing in there about him being bovine, but I guess this is Pokemon. 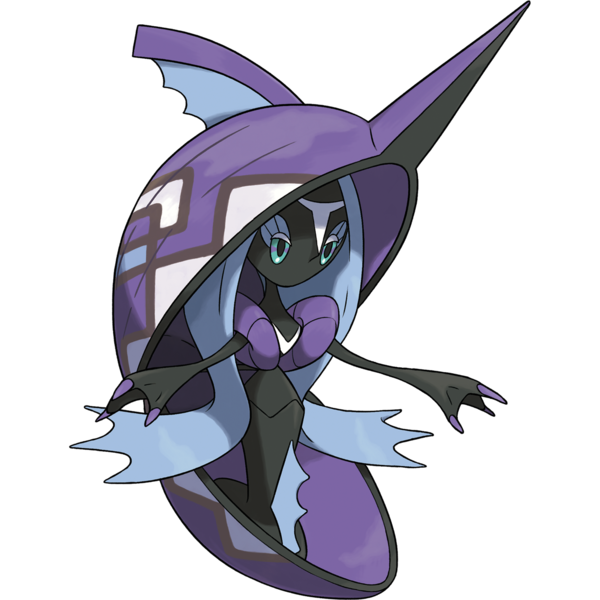 Finally, we have the water/fairy deity of Poni island, Tapu Fini, with the fairly cool design concept of a "mermaid" in a bivalve-like shell that also forms the head of a swordfish. I've seen some wishful thinkers interpreting it more as the head of a dolphin, but that's distinctly a more fish-like dorsal fin, and the sharpness of the snout is a dead giveaway.

Fini has more typical characteristics we might associate with a mer-woman; a protectiveness towards the sea, a mistrust of humans and the ability to produce healing water. In a dark but also very appropriate twist, she can generate a fog described as inducing a "self destructive trance," and said to have resulted in a number of shipwrecks. This little mermaid can drive people to suicide on the high seas, just like the original sirens.

Unfortunately? None of this has anything at all to do with any particular god, unless Fini's destructiveness and connection to the ocean are enough to link it with Kanaloa, the squid.

It seems rather more likely, I suppose, that Gamefreak modeled only Koko after a particular god and just sort of BS'ed the other three, and maybe even Koko itself was just sort of accidentally that similar to Kū. Creative liberties to this degree are a norm for Pokemon, it's true, but native Hawaiian culture in particular is very poorly understood by the rest of the world, often reduced to nothing more than rough impressions of "hula dancing" and "tiki"-like images stripped of context. If they "had" to base Pokemon on Hawaiian gods, they may as well have gone all the way and aimed for a little more authenticity, if only to spark some further interest in understanding the real deal behind that "tiki stuff."

Again, I'm rating based entirely on the designs themselves, so I'll still give Fini a good one on its own merits.

As cultural references, the four "Tapus" could have shown more effort; I feel like the previous generation's norse-inspired beasts, for instance, balanced a level of accuracy with Pokemonesque embellishment fairly well.

As Pokemon alone, these things are still interestingly designed with a lot of personality, and what's really compelling is their signature in-game "Z move," as you see here. What IS this headless giant? Is it simply a body the Tapus can manifest and control, or is it a separate being they work in tandem with, the true guardian of the Alola region?