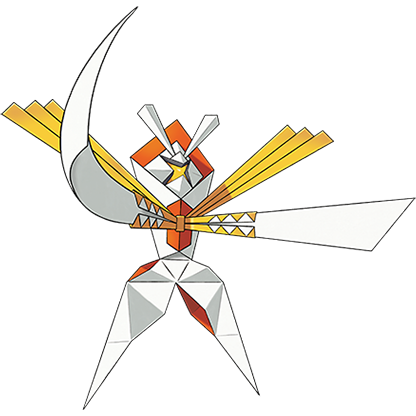 Since this is the last "version exclusive" UB, it's worth mentioning their unusual numerical distribution. Though Buzzwole and Pheromosa are counterparts caught in the same location, there are only two Buzzwole in Sun to four Pheromosa in Moon. Inversely, there are two Celesteela in Moon, but four Kartana in Sun! Unlike its steel/flying counterpart, Kartana is a grass/steel Pokemon, and the reasoning behind it is also a little simpler than the bamboo space princess; this one is merely a steel type because its limbs are like "swords," and grass type because it's made of paper! Together with Tapu Bulu we now have two grass Pokemon in one generation who aren't in any way actually "plant"-like (nor overtly fungal), and personally I think that's pretty neat.

SO, Kartana! Look how happy it is!! I love the idea of a deadly paper swordsman with an almost two-dimensional body, its paper "fortune teller" face is a very clever touch and it has an overall sort of insect-like appearance. Like Pheromosa, I feel like this is also another one closer to Pokemon's usual aesthetic feel, though if it had been a more conventional Pokemon, they probably would have put eyes on it. Outside the Starmie line and now technically Dhelmise, true facelessness seems to be a feature exclusive to some of the UB's, emphasizing their "alien" nature I guess...though according to conceptual art, that luminous opening in Kartana's face is actually its "eyes." Not "eye," it just says "eyes." Speaking of which: 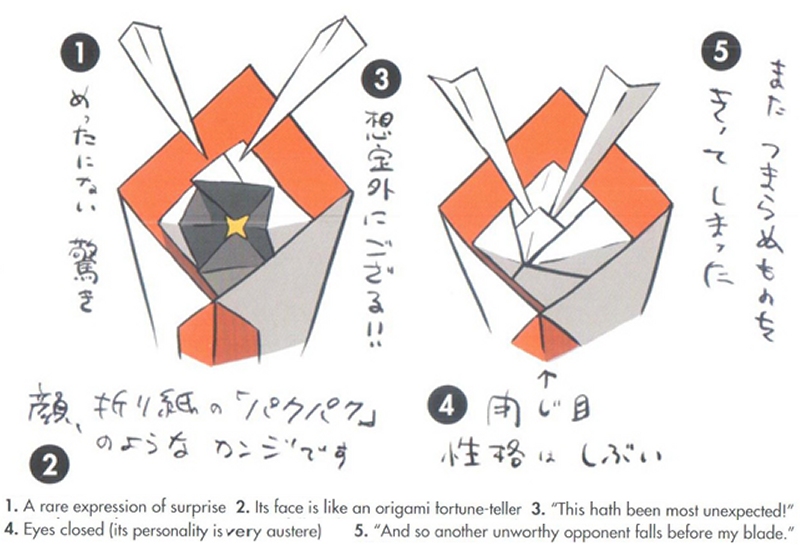 Would you look at those ADORABLE notes?! Why can't we see production stuff like this for every Pokemon?! Kartana wasn't my favorite of the UB's at first glance, but I love it easily twice as much just knowing that it thinks like an old-fashioned samurai. Notice that its antennae, or maybe they're just angry eyebrows, somehow detach and hover around its face here. Even cuter!