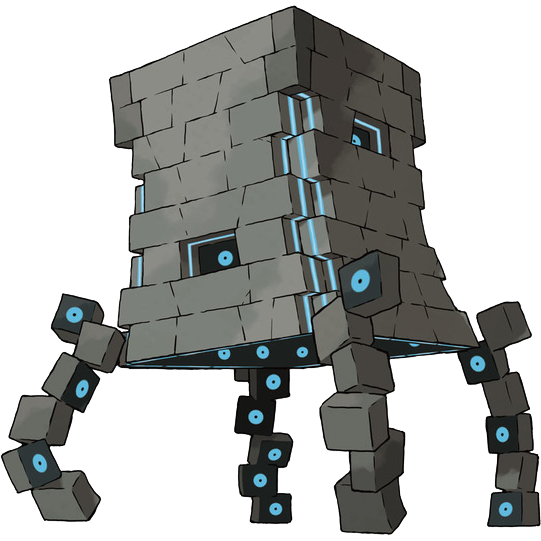 Now this one's all sorts of fun! STAKATAKA, which is even fun to say, is a concept I even proposed already when I reviewed rock types as a whole; a colonial being of living bricks! Its rock/steel typing is a little regrettable, as it results in some glaring elemental weaknesses for what should conceptually be an incredibly tough monster, but players have found ways to make an all-out offensive Stakataka work remarkably well, so you really can't judge a brick by its cover.

Stakataka could hypothetically take any shape it wants, but it usually chooses to form a hollow, rectangular tower with four segmented, spindly "legs." Every individual brick is a small, independent Ultra Beast itself, with a stony skin on one side and a single, spooky eye on the other. Seeing this pokemon in action is a real delight as the brick-creatures flip around to take a peek, their eyes turn red under stress and they sometimes rearrange themselves. The visual effect reminds me somewhat of the youkai, Mokumokuren, and also a lot like some long-lost evolution of Unown. Most of all, it fills a much needed niche for those who wanted an architectural-looking Pokemon that wasn't also a sandcastle. Nothing's wrong with Palossand, of course, but there's a difference between a sandcastle monster and an actual castle monster! I know people other than me don't prioritize team "aesthetic" a whole lot, but Stakataka looks especially good on a team of mostly "Medeival Fantasy" pokemon:

Shhhh we can pretend that bug is a European knight until we really get one that looks the part.

If I have only one minor critique about Stakataka, it's that this is another Ultrabeast that kind of looks like it could have been a regular pokemon. It's not that any concept at this point is too strange to be a regular pokemon, but my favorite of the beasts are still those whose very visual feel is counter to any other Pokemon's design style, and I could stil have seen Stakataka as a one-off in any other generation. I guess I'm just still torn as to whether I prefer the line completely blurred or prefer the UB's to be their own distinct category of entity.