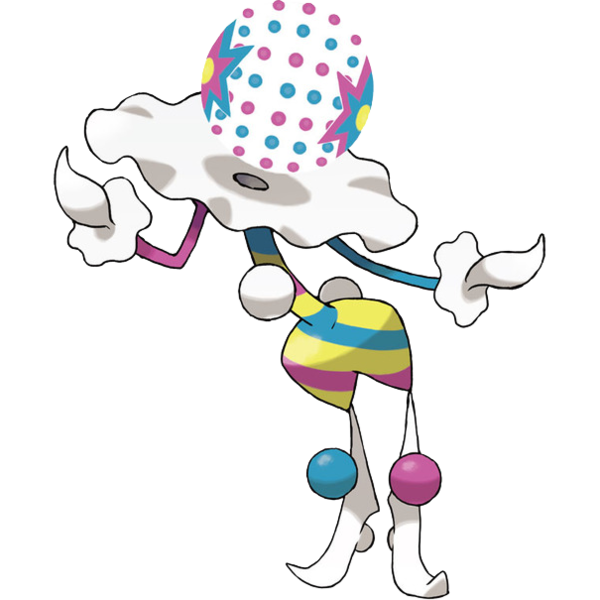 Alright, now they've definitely spoiled us on all these beasts. Unlike many, I was actively hoping we would get at least one more that didn't really "look like a pokemon," something that looked like it came in off some other game like Celesteela or Xurkitree, and this weirdo does not disappoint. You can see that its overall motif is a sort of alien circus clown, with a psychedelic, hovering sphere for a head and tubular body that's both very human and very very not.

And while I've said before how much I enjoy the rare eyeless pokemon, those stars on the opposite sides of Blacephalon's cranial orb are in fact its ocular organs, which I think lends it quite a bit more personality and charm while still looking very, very strange.

Best of all, this monster is a ghost/fire pokemon, and its gimmick is that its head can explode. It's actually a fireworks themed space clown, and it playfully tosses its head around like it's entertaining a crowd. A crowd of hapless prey. The pokedex says it "slithers" towards its victims, surprises them with a dazzling explosion, then drains away their very vitality in classic ghost-type fashion! Of the few vaguely clown-like Pokemon we've had, this is surprisingly the first one explicitly aiming to be scary, so at long last, Pokemon has found its Pennywise.

And since I put together a theme team around Stakataka last page, enjoy Blacephalon's Circus of Horrors, now updated for Gen VIII:

When I first reviewed Blacephalon, I gave it only a normal 5/5, but since then, I've come to feel that it's definitely one of my top favorites for its perfect blend of strange, scary, cute and fun. And again...it's a Pokemon whose head explodes!