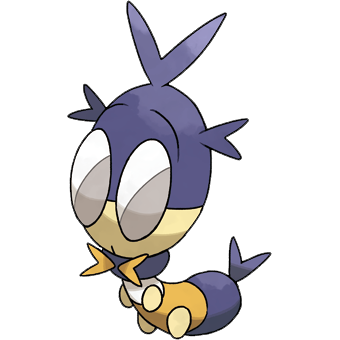 Next comes the usual bug-type Pokemon with a three-stage, complete metamorphosis and WAIT, OH MY GOSH, LOOK AT BLIPBUG!!! LOOK AT IT!!!! IT HAS GLASSES AND A LITTLE DOT MOUTH AND A LITTLE BOW TIE!!!!!! It's a NERD! It's a NERDY WORM!!! IT'S LIKE A BOOKWORM!! Its Pokedex says "A constant collector of information, this Pokémon is very smart. Very strong is what it isn't." MY HEART.

I don't like its color scheme all that much (what's wrong with the expected green?) but as a design overall, this one is adorable! Most if not all larval bug types have been adorable, but the geeky motif just pushes this one into an easy 5/5. Sadly...as an early game larva, you know it's going to be changing quite a bit. 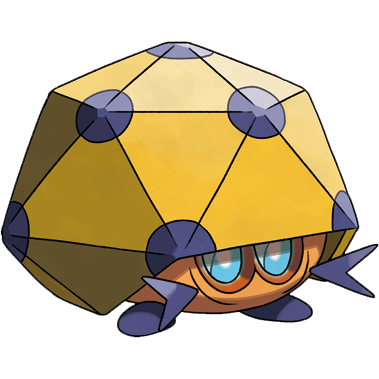 And...not as big a fan anymore. Dottler has grown on me, and it's actually based on a Doppler Tower, with Blipbug apparently being a sort of radar antenna. Still, Blipbug was superior!!! Interestingly, it is at this point that the line becomes our first ever Bug/Psychic type, which would have set me up to expect something pretty fascinating for it to turn into. Alas... 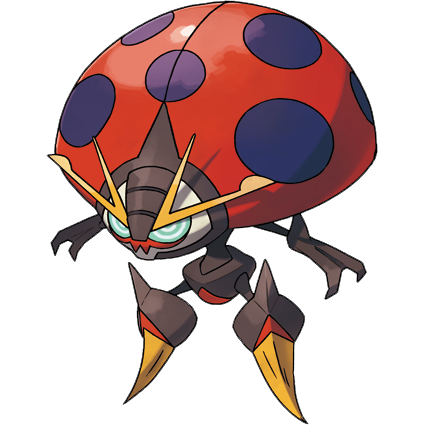 I'm sorry, now they've lost me entirely. I completely understand those who adore how much this Pokemon looks like one of Doctor Eggman's robots or a Mega Man X boss, but I'm just not that big on it. Its bug/psychic typing is reflected by the idea that it's an "orbiting satellite" and what looks like a beetle body really houses its gigantic brain, but if you told me we would get a bug/psychic Pokemon with a huge brain I might have pictured a hundred different things that would have been more exciting to me than Pokemon's second ladybird beetle. There are SO MANY unused insects, including other beetles, that could have occupied this spot! Some would have even allowed for basically the same design, like a tortoise beetle! Look at this one and tell me you're not in love:

Orbeetle also gets a Gigantamax form turning it into a gigantic, alien spaceship, because in Japan, the spots on a ladybug are referred to as "stars," so you have species like the "seven star" and the "five star" ladybug. It's novel, I guess, but still, would have been a lot more novel if it had been a brand new arthropod to the franchise. At the VERY least I'd have wanted it to keep the cute, quizzical nerdiness of its predecessors; retaining Blipbug's personality I might have loved it even as a predictable Moth-like Pokemon, like an astronomer luna moth or a witchy librarian death's head. I know this line's theme was "radar equipment," but I'd have even liked the satellite ladybird more with a "geekier" look to it.

For the record, my old fan idea for a bug/psychic was always a "big brained scientist" too, but mine was a tick, sucking information from hosts instead of blood. My earliest sketches for it even had a similar body plan to Orbeetle with a huge "head" and dangly little "body," but I eventually decided that it didn't look tick-like enough, and this This became its last incarnation to date:

Ideas for "Psychiatik" eventually turned into a grislier looking Mortasheen entry, though quite a bit different from the above design. I think this might be the first time I've linked to a Mortasheen monster from these reviews, so if you're one of the people only just tuning in for the Pokemon stuff, that there is my own horror-themed battle monster setting. Maybe my Pokemon version is still too "grotesque" with the bulging veins and stuff, but you get the idea!

In the end, Orbeetle still gets a 3/5 from me because it's objectively competent for what it aims to be and a lot of people love it for very fair reasons, but I just personally feel that both Blipbug and the psychic/bug combo had a lot more creative potential.