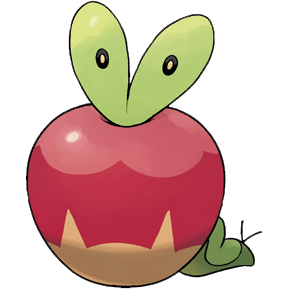 Oh no...OH NO! IT HAPPENED! IT FINALLY HAPPENED! I HAVE A NEW ALL TIME FAVORITE! Do you have ANY idea how much I immediately love that there's a "wormy apple" Pokemon? Do you really? I don't think you do. I don't think you possibly can. No matter what it looked like, a wormy apple Pokemon was predestined to skyrocket straight up my all-time favorites list to rest somewhere alongside Gloom, Garbodor and Buzzwole, but it even comes with an entirely unique sort of design I've never before seen, with remarkable leaf-shaped eye stalks protruding from the top of the fruit! A fat little green tail emerges out the back, and despite the fact that we never ever see it in-game, they actually modeled what the whole thing looks like:

The most remarkable thing about Applin is, however, that it is grass/dragon. Is that a "wyrm" joke?! It's a wyrm in an apple?! This is the best thing ever. The best.

Too bad almost no evolution could possibly live up to it... 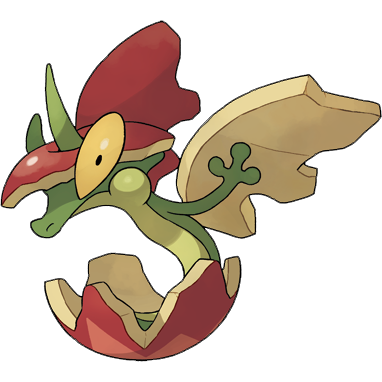 But, for some reason, it just doesn't?

I feel like I ought to love it a lot more than I do, and it's hard to pin down why I don't, but it's most likely because the design has simply shifted too reptilian. In popular culture, the "worm" in an apple is often an oligochaete annelid, like an earthworm, whereas the "real" apple worm is usually a caterpillar or a maggot. Applin could have passed for either, but Flapple passes for neither; it's much more like a little green dinosaur or a cartoon gecko, which means my single favorite aspect of the concept has been discarded.

There was actually a SPLIT SECOND when I first saw a blurry screenshot of this Pokemon that I thought it had a tubular proboscis mouth, like this:

...And it was only for a moment, but I liked that easily twice as much, and I still do. It fits the "acid spitting" aspect and it looks less like just, well, a lizard. Lizard Flapple would only net a 3.5/5 from me more personally, but I will give it a 5/5 because I still deeply respect the concept of a buggy eyed apple dragon, and I know how much the rest of you find everything about it to be perfect. 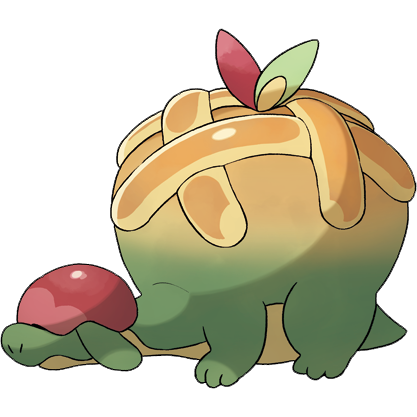 Then there's "Appletun," the "sweet apple" evolution, and after what I said about Flapple, it goes without saying that I like this the least of the three Pokemon we've now seen here. I'm sure this has put a big red target on my forehead already, because this thing is a DARLING of the fandom right now. People cannot get enough of it. It even has a pretty big volume of borderline to outright fetishistic fan art that probably isn't surprising if you already know how much that happens to Yoshi and other round, dopey-looking dinosaur characters. I don't get it myself, but you do you.

In any case, this just isn't a Pokemon for me. I can at least see what's (platonically) cute and appealing about it, and personally I love that those floppy "ears" are actually the same old eyes:

That's so great! It's a Pokemon whose eyeballs dangle! But alas, the rest of it is still just a fat turtle thing, or it would be, if it had been drawn like it had a shell on its back, and that brings us to my other problem: why wasn't it?

I actually strongly dislike the sudden, blurry shift from this Pokemon's green lizard skin to its golden "pie crust." It just looks terribly terribly wrong to me, like something's missing from the model. What makes this particularly frustrating is that a pie doesn't even look that way, but do you know what a pie does look like?

...But anyway, they loved this line SO much that they didn't just stop at two evolutions. They also gave both of them Gigantamax forms, but oddly, they both have the same Gigantamax design, and it doesn't look anything like either of them.

.......Con...sarnit..........this was a THIRD opportunity to give this line a final form I might have really loved, and they ALMOST do by making it some sort of giant, mutant Applin, but while Applin's "true face" was simple and adorable, I find this colossal critter's mug even more disquieting than Skwovet's swollen doll face.

No offense to the designer at all; it's just that the combination of puffed-out cheeks, lolling tongue and soft, toothless mouth are fundamentally unpleasant to me in a way that's difficult to put to words, except perhaps that it reminds me of how a sick infant looks when it's coughing, so I guess it does go right back to my beef with the Cabbage Patch kids. I also happen to know that this "toothless and puffy" formula is generally appealing to the aforementioned Dirty Yoshi Fan Club, and after its reveal, not a day went by before I saw someone in tumblr tags express that they thought this Gigantamax's mouth looked "inviting." Interpret that however you will.

Just a few sharp, dragony fangs in those jaws, once again just a minor detail, might have gone a long way to making this thing look a little less creepy. As it is, I want to give this form a 2/5 for its mangling of Applin's perfection, but since I still admire the basic concept, it gets another three outta me. I just wish it kept that unholy visage down in its apple like it did when it was a perfect, tiny baby.

In the end, Applin's evolutionary options are nowhere near the disappointment to me that Sliggoo's were, but each still takes a step or two backwards from what it almost promises me. It seems like only Eevee is ever permitted to have more than two evolutions, but if I were to design a third for Applin, it would really just ramp up everything already there:

I'd just really love a fully evolved Pokemon that still looks a lot like an Applin, and if it must add more anatomy, I feel like turning the apple itself into a "mouth" was staring them right in the face!