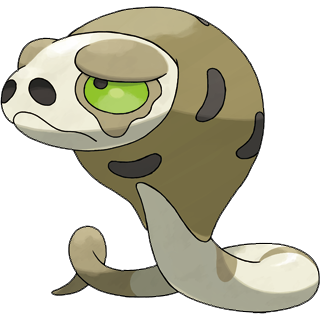 Well, it has been a long time since a snake Pokemon. Silicobra is a pure ground type, and I have to say I actually love its design the most of any snake in the series! Arbok is good, sure, but Silicobra has that pleasant, smooth teardrop shape and sad, sleepy eyes. Ever since X & Y I do feel like we've been getting more Pokemon with rounded, fleshy forms, and that's definitely a really good thing in my book. The idea is that Silicobra is just like a spitting cobra, but it doesn't produce venom at all, instead spraying sand from its nostrils to whip up a sandstorm! I really like when a Pokemon takes an ability from its inspiration and just changes the element of it, like how Eelektross is an electricity-sucking lamprey or and Heatmor is a flame-spouting anteater. 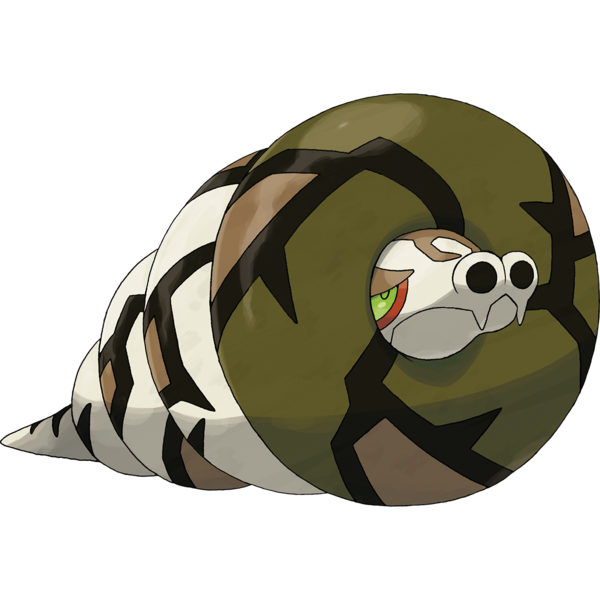 Silicobra evolves into Sandaconda, which isn't nearly as cute and charming, but it's another very nice snake design. The ring around its neck looks at first like part of its coils, but that's supposed to be its "sand sac," the same thing as Silicobra's hood. Some have noted that its nose now resembles a shotgun, so it's sort of like a hunter crouched in bushes? Maybe that's reading too into it, especially since it lives in deserts anyway.

I like Sandaconda's special Gigantamax form well enough, too. Now that it rotates like a giant, living sandstorm, it's definitely one of the more dramatic and appropriately formidable giants, though I'm not sure how its organic "sand sac" can spin all the way around unless it's physically detached from its body, right? Weird. Another problem, as many have noted, is that when Gigantamax forms do look this different and this much more dramatic than their base forms, it still feels like we were simply robbed of a real "evolutionary stage," that relegating these designs only to a temporary powerup, maybe even a Galar-only powerup, may leave these Pokemon sort of "incomplete" in the future.