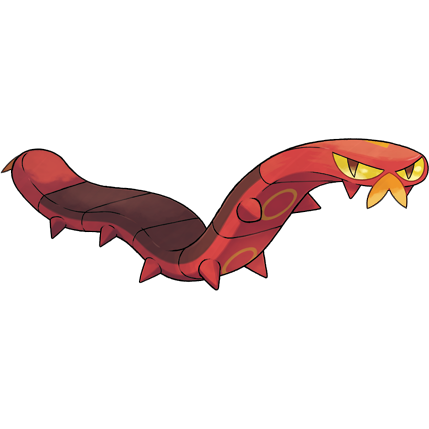 Sizzlipede is Galar's second all-new bug type line, and everything about it is great! Well, almost. I mean, what's NOT great about it isn't really its own fault, and that's the fact that it's our second centipede line. This wouldn't stand out if not for the fact that the first new bug line in Galar was also a repeat. That aside, while I still think Venipede is perfect in every possible way, this little critter is equally so! It's such a delightfully flat little invertebrate, with those wonderful grouchy eyes and little mandibles and nubby cone legs. It's a bug/fire type, so those rings on the underside are basically like ceramic burners. It wraps around its prey, roasts it to death, then eats the freshly cooked meal! 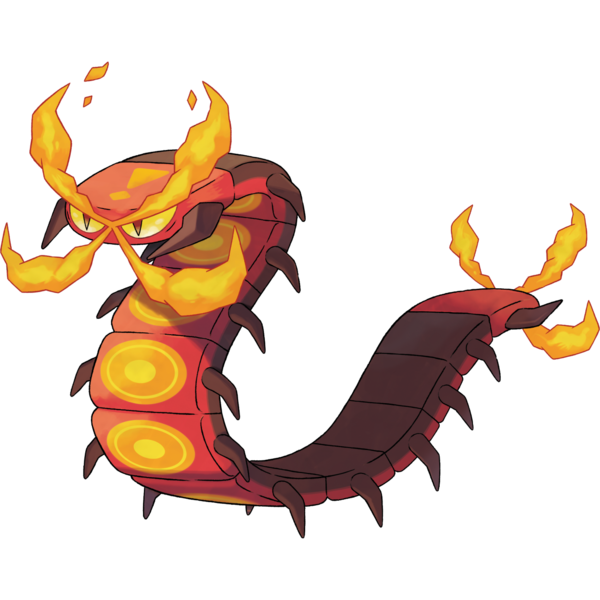 The evolved form is a bit more conventional looking, but still solid. Now it has flames representing its antennae, and a tail that's almost identical to its head, lacking only eyes. It certainly looks a very, very great deal more like an actual centipede than Scolipede does, though as I've said before, it's not totally necessary that a Pokemon feel the niche of representing any given animal 1:1. If you loved centipedes and you didn't like Scolipede, then Centiskorch has got you covered.

This is also a Pokemon designed to have a gigantamax form, and it's one of the most impressive looking G-max designs in the game; incredibly long, thin and winding, with really lovely looking slot-shaped eyes, a "bubbling" pattern on its back and an "exclamation mark" on its head, as if its entire body is some kind of thermometer ready to burst! It even has a pretty neat attack animation where it scrunches up like a radiator coil: Neat! A centipede also makes a lot of sense for a G-max Pokemon or any giant monster, for that matter, because there's a great deal of mythology surrounding huge-sized 'pedes. This is especially true for Japan, where giant centipedes were said to be even more menacing than dragons! This isn't a Japanese setting, but I thought I'd mention that. My final verdict on this line is still fairly mixed, however. The Gigantamax form actually feels like the complete realization of its concept, with that thermometer gimmick, but this leaves its true "default" form feeling like Venipede's lesser cousin.

Repeating an animal isn't egregious, no, sometimes I even prefer they take another shot at a particular creature, but Venipede, Whirlipede and Scolipede used venomous centipede anatomy to build three creatures not actually centipede-shaped at all in a very memorable, unexpected "Pokemon" kind of way. This line applies fire typing to a real animal with about as much flair as it could have, I suppose, but it wouldn't have even taken too much modification for it to have represented some other long-bodied invertebrate. Just look at this bobbit worm: A number of marine polychaete annelids already look amazingly similar to centipedes. There are also several species known as "fire worms" for their fiery colors and painful sting, as well as species that live in boiling hot springs or near hydrothermal vents! They could have easily had a fire-type sea worm with the same gimmicks and nearly the same design, which may have ultimately made little difference to everyone else, but a brand new animal is still always going to be preferable to even a good repeat. There's even another animal that already looks almost exactly like the first stage, the prehistoric Odontogriphus!

These are still cool looking enough centipedes that a 3/5 would be too harsh, but it still falls a bit short of 5/5 for multiple reasons. Even if they were our first-ever centipedes, I might still take issue with how direct the design feels.