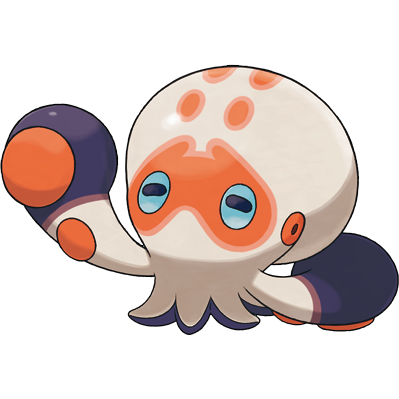 After the franchise's second salamander (after Wooper line!) and second centipede, we get its second octopus. Alright, understandable, it's been almost twenty long years since Octillery! I kinda wish Octillery had gotten a regional evolution or something but a whole new octopus is fine I guess. Clobbopus is cute! It's a much more realistic take, with adorable octopus eyes and a nice bulbous shape to it. It even has a mouth in the CORRECT location, a little dot one you can sometimes see beneath its tentacles! Excellent! It's also pure fighting type, with a punching theme. A boxing octopus!

That's genuinely pretty fun, although, it's still a tad straightforward, isn't it? This is the kind of cute-but-cool critter I'm once again more accustomed to seeing from "wannabe" Pokemon games or fan regions. Our last cephalopod, Inkay, was much more stylized. So was our last boxing-themed Pokemon, which was Crabrawler just last generation. Nothing is wrong with Clobbopus, but it also feels like it's missing one more "Pokemon Twist." What if it had markings that looked like big band-aids on it or something? Still super super cute. 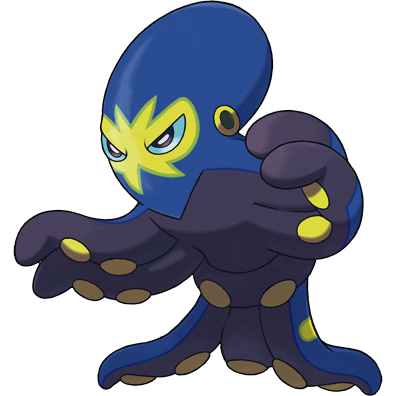 Unfortunately, everything I found good or promising about Clobbopus goes South when it evolves. It's a "masked wrestler" octopus, which is a concept with potential, but you'll notice it has nothing to do with punching anymore, when an octopus with multiple "boxing gloves" might have been a pretty fun visual. Crabrawler didn't keep its boxer theme when it evolved, either...what do they have against boxing gloves lately? Does Hitmonchan keep threatening to sue? Grapploct also drops both the lifelike eyes of its predecessor and puts its mouth back in the wrong place for an octopus. What mouth, you say? ...Oof. No. You close that ghastly thing this instant, Grapploct.

Now that I think of it, pretty much every single detail of Grapploct looks haphazard to me. I don't like how flat its whole front is before sweeping back into such a stiffly egg-shaped head, I don't like how fat and round the tentacles are without even swelling into "fists" like its predecessor, I don't like how it has a featureless grey "torso" the tentacles branch off from when they ought to start right where the mouth is, I REALLY don't like the suckers being big, bright, featureless ovals, and finally, its color scheme is almost as bad as Cinderace, if not even fouler in comparison to the lovely naturalistic markings of its own unevolved form. What happened?!

Compare poor Grapploct to our last cephalopod, the elegantly menacing Malamar, and you almost can't believe they're from the same franchise: 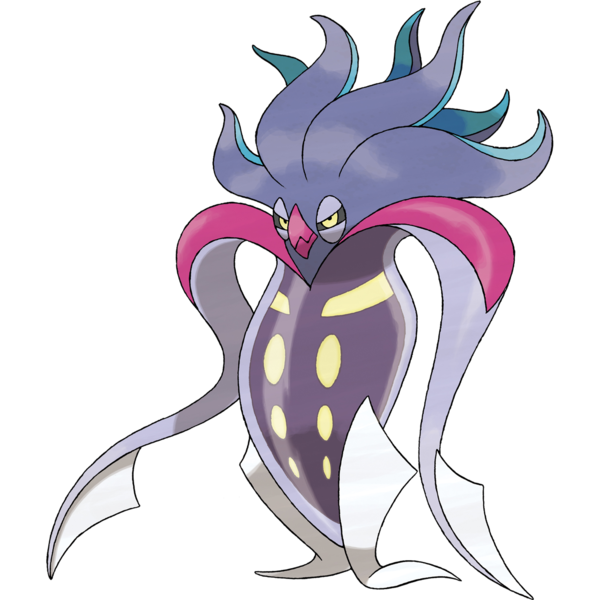 In yesterday's Sizzlipede review, everyone seemed to think I was primarily taking issue with the fact that it was another centipede. I found that kind of frustrating, because I honestly put a lot of effort into trying to communicate the actual reason I was comparing it to Venipede: that the Venipede line shows more distinct originality by not really looking like any other centipede-monster in any other game. It simply highlights, for me, that the Sizzlipede line feels like an "unfinished" or "rushed" concept, and the same holds far, far more true for Grapploct.

It's not that Grapploct's designer is a bad artist, not at all, it's just that every single Pokemon goes through some level of internal feedback and revision before they finally put it into a game, but less time than ever has been passing between new Pokemon regions, and I'm afraid that's really starting to show. Grapploct feels like the very barest minimum of what a "fighting type octopus" could have meant, or to quote a line I recently heard in the Harley Quinn cartoon but am not sure was original to it or not, "they came up with the icing before they baked the cake." If you're curious, this was originally directed at the Joker because his latest villain plot was stupid. That show goes really above and beyond in making Joker out to be a dumb, obnoxious tool, which he is. I'm so tired of seeing him in everything. Doctor Quinzel made the right decision distancing herself from NOT ONLY a manipulative and abusive boyfriend but quite frankly the most trite and underwhelming villain in Gotham at this point, earning barely more than 2/5 Pokeballs from me. What? You think you're a better Pokemon than that you Banal Hot Topic clown?? Step out of fiction and do something about it. WHOOPS! You can't! When are they going to stop giving movies to this tryhard and start making Poison Ivy movies? Fans think she's cool, sympathetic and attractive in almost all incarnations and the time is VERY ripe for environmentally-flavored antivillains, you know.


Anyway here's a redraw of Grapploct and some other ideas for "fighting type octopus" I hacked out in a few minutes: I know you guys, you're gonna say these "don't look like Pokemon." Well, neither does Grapploct exactly, and that's why Pokemon go through the kind of group refinement process I was only just talking about. PLEASE, FOR THE LOVE OF GOD, GIVE THEM MORE TIME. I don't care if a new core game only comes out every decade if it just means they finish all those cakes. Now that they conceded to making DLC, they could just pour 3-4 years of effort into one really big, really fun, really detailed region and keep putting Pokemon out in carefully curated batches, couldn't they?? Maybe that's exactly what they're moving towards. I kind of hope so, but I also hope their DLC won't keep being as expensive as I'm hearing it's gonna be.