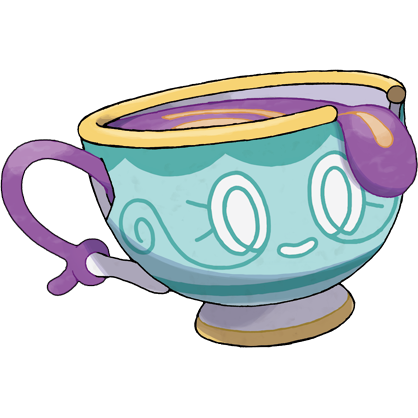 Okay, now we're talking! A new ghost type, and a totally off-the-wall object Pokemon! Sinistea is said to have been born when a lonely spirit possessed a cup of cold tea, and can absorb the lifeforce of anyone who drinks it - but it tastes terrible! That's a really cute concept! The teacup's pattern looks like a face, but the real Pokemon is the purple goo inside. I love the way it's partially dripping out, and how it extends one fluid arm to complete the cup's broken handle...with its pink out for good measure.

What's also fairly clever about Sinistea is that it requires a teapot item to evolve, but if you go into this game blind, you may find that this just won't work! That's because there are two different teapots, the cracked and the chipped, each of which is only compatible with either phony or authentic Sinistea...and the only way to tell the difference is the tiny mark of authenticity on the underside of the cup! We're just Antiques Roadshowin' this one! 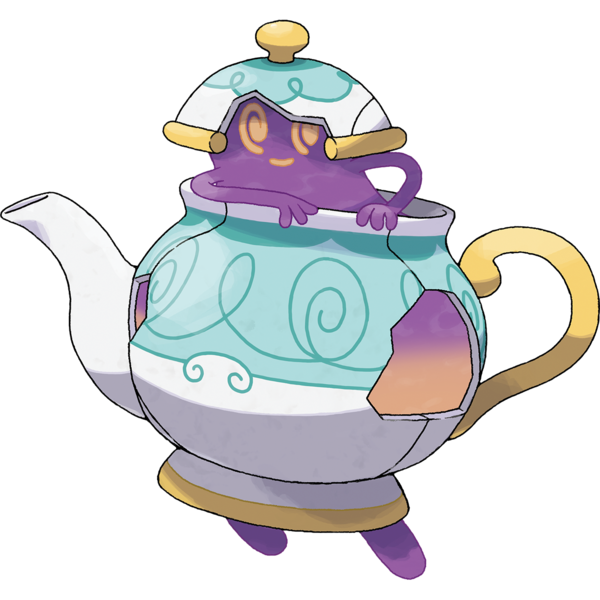 So depending on which teapot you present it, Sinistea upgrades itself to Polteageist, and...wait a minute! WAIT A MINUTE! Back when I reviewed the Ghost Type a few years prior, I actually said we were still missing a "poltergeist," and my own speculative idea included a tiny ghost in a teapot! It wasn't the main focus of my suggestion, but it's nice to guess at something and see it happen.

I do feel like Sinistea was actually a little more interesting, to be honest, with the false face on its cup. We can even see now that the orange swirl in Sinistea's liquid was indeed its real "face," and the abstraction of it is a fascinating look in that light. Polteageist, however, is still super cute! Sometimes it even pops out of the spout! It's apparently capable of creating new Sinistea by pouring a little of its liquid body into any unattended black tea, which can even lead to infestations of them in cafe's and suchlike. If it finds a trainer that it learns to trust, though, it will allow them to experience its "distinct aroma and flavor." THERE'S the Pokemon I know!

A new, silly concept with a memorable design, a thoughtful internal logic, and a slightly ominous streak to it...though still a little less interesting than its prevolution. I wish the teapot was still a "second face," maybe with the spout as a nose?

I did see a few people express at some point that they hate the idea of a Pokemon feeding itself to anybody, that it even feels kind of unwholesome. I'd say there's things about this series they're just too young to remember or fought hard to forget.