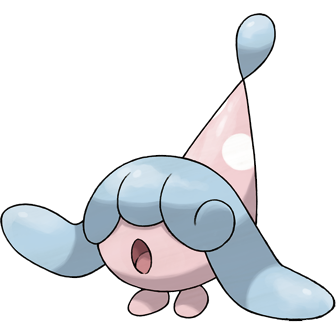 Good old psychic types; most of them are weird as heck. This thing is...what? Just a head? A head with little feet and floppy hair it uses like arms I guess, and a "psychic antenna" that happens to look like a pointy hat. I actually like that a lot! I think I'd like it a whole lot less if it had visible eyes, but with bangs covering them up (if they even exist) it has a much more charming look to it. The "psychic antenna" apparently detects emotions, and...it doesn't like that. It stays far away from the feelings of others. That's cute too! I really like this sulky Kirby enemy! 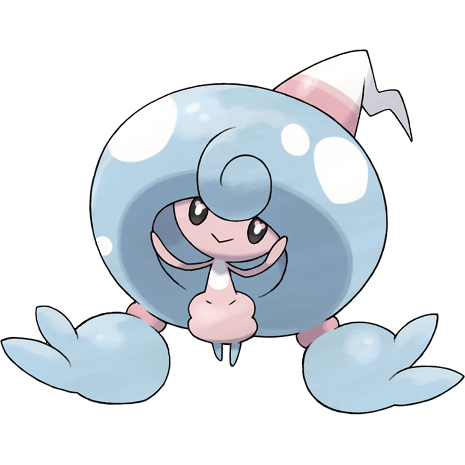 Hatenna then evolves into Hattrem, and...oh. There's the eyes. Just like Zubat, Ralts, Deino and arguably Sliggoo, they really can't stand to leave visible eyes off a Pokemon for long, can they? That's another thing I found so darn refreshing about some of those Ultrabeasts.

Hatenna also ceases to be just a head with feet, and I guess I saw that coming, but now it's just a little child-looking thing, and is beginning to feel distinctly like another Gardevoir. It's an interesting inversion of it, though, since Gardevoir's whole conceptual gimmick is emanating powerful, intense emotions, but like Hatenna, Hattrem is not a fan. It's so not a fan that its Pokedex says "no matter who you are, if you bring strong emotions near this Pokemon, it will silence you violently." It doesn't say "negative" emotions or "bad" emotions, just "emotions." It also hates noise, and its other dex entry says it uses its pigtails as fists to "pummel" you until you're quiet.

So the design here feels pretty bland to me, honestly, but it's a compelling idea for an ostensibly cute and pretty psychic type line to be so brutal over how much it despises basically all feeling in its presence. It feels like they definitely conceived it to be a direct rival to the Ralts line, so far. 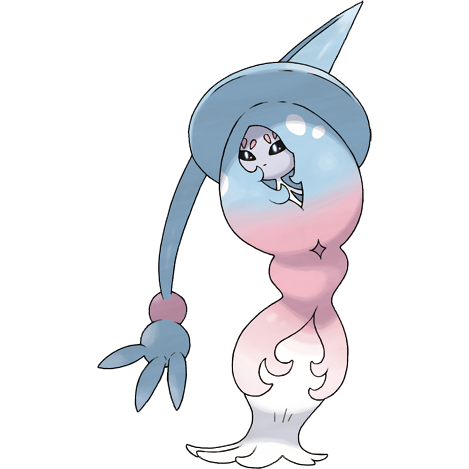 In fact, the final stage now shares Gardevoir's Psychic/Fairy typing, and while I still like the "Kirby enemy" look of its first stage, I think this really "saves" the line after the somewhat generic look of Hattrem. It looks like it has a limbless, curvy human body that you surely know has made it a hit with fanartists, but most of that mass is actually nothing but its "hair!" That thing on the end of Hatterene's "hat" is also stated to be a "tentacle" ending in "claws." Claws that it uses, and this is another actual Pokedex quote, to "tear you apart" if you're too loud. The dex goes on to say that Hatterene is sometimes called "The Forest Witch," and you know, it's pretty eerie that its title in the Pokedex is just "the Silent Pokemon." It's a reclusive, telepathic witch made of hair that wants peace and quiet at all costs. Associating a "feminine" design with a theme of emotion is fairly cliche, but it's not usually in such a hostile context. Its psychic power allows it to feel what everything else feels, and that just drives it up the wall! It's not only a neat personality gimmick, but it has a suitably strange, visually interesting design to match, one of the cutesy ones at first glance, but that "grey alien" face tells you something's off right away, and all its elements definitely feel right at home with the overall concept of "fairies." Usually elegant, but ruthlessly inhuman.

I will say however that when I first saw the design, I thought it was going for a "princess" motif, with the tentacle looking like the tassle on those goofy old conical hats. We do have confirmation that the designer of a Pokemon doesn't necessarily get to choose its lore, mechanics or even name, so there's really no telling if it was always thought of as witch-flavored or not.

They also predictably gave Hatterene a Gigantamax form that ramps up its design without changing too much. The head tassle is now a much more menacing triple-tentacle, and I like the multiple gaps in the hair where its true body pilots it around like some kind of giant hair-bot. Now the dex says that it can sense emotions "up to 30 miles away" and will immediately attack when it senses hostility. Can't wait for the obvious anime episode where Gardevoir gets snapped in half like a pencil I guess.

Between its interesting execution and its surprisingly frightening characterization, I'm going to give this line a pretty solid overall rating...but there is one obnoxious thing about it, which I'll discuss after the rating, because some people seem to get confused (or even distressed?) by how I can complain about a Pokemon and still give it a good score.

There's an obvious template that we've seen appear for six generations in a row now, but if Gardevoir, Mismagius and Gothitelle weren't restricted to one gender why are Florges, Tsareena and Hatterene exclusively female? There's people who get seriously mad that I've ever brought this up. I've mentioned it maybe two times before, I think, and people still pretended both times that I was exhibiting some weird, nonsensical hang-up. But doesn't this progression kind of read as if somebody suddenly decided that Pokemon aren't allowed to be male if they look like thin, upright cartoon people with pretty hair and dresses? The whole point is that they seem to be the first ones with a weird hang-up here; Primarina has been the only exception, but that's a Pokemon that looks a lot more like an animal and is only following the same gender ratio as all starters do. This isn't something that can bring down the rating of a solid design, but it feels like there's an unimaginative reasoning behind it, that's all. Funny that by doing these one per day, this review just accidentally lined up exactly with Valentine's day, though.